The reader who has consulted the cast list may well wonder what was going on, though a good few of you will doubtless have heard already. This is ‘Don Giovanni: The Opera’ – as opposed to ‘Don Giovanni: The …’? – presented in the gay nightclub, Heaven, by RC Theatre Productions. With the exception of Don himself, a Soho club owner, each of the roles undergoes gender reversal. Leporello becomes Leo, Don’s PA. Elvira becomes an older, rather tiresome gay man, Eddie, deluded in his belief that he was ever ‘with’ Don in the first place, yet every bit as captivated as Elvira. Donna Anna becomes Alan, with Olivia (Don Ottavio) his fag hag accomplice; he has, as many of us suspect with Donna Anna in any case, consented quite willingly to Don’s advances, but wishes to pretend otherwise. Zerlina and Masetto become Zac and Marina, a working-class couple about to marry, but with one of them at least clearly interested in exploring the true nature of his sexual orientation. There are a couple of additional cast members, movement director Samantha Hull also appearing on stage (more on that below), and Damola Onadeko appearing in various guises, and with varying degrees of clothing, his muscular torso doubtless appealing alike to denizens of the on-stage club and to much of the audience. (The Wimpy Bar uniform is perhaps of more specialist interest.) His – Everyman’s – provision of cocaine added fuel to the kinetic energy of production and score, and reminded me in mind of one of the few persuasive stagings of Don Giovanni I have seen, that by Calixto Bieito for ENO. 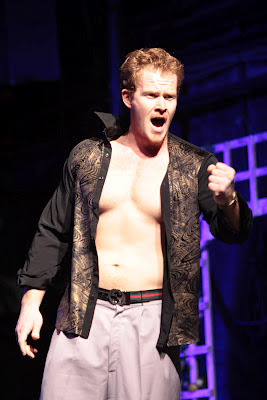 Yes, it is cut, to two hours, including an interval. Yes, it is translated, or rather adapted, extremely well by Ranjit Bolt. (The Catalogue Aria transfers its attention, for instance, to Hampstead Heath, Clapham Common, the lavatories at Heaven, etc. …) Yes, we have a reduced orchestra (four violins, viola, cello, double bass, oboe, clarinet, bassoon), the reduction skilfully handled by Tony Burke and Ken Roberts for Pocket Productions. But it all works tremendously well. Colin Pettet’s musical direction is far more alert to the light and energy, to the contours and direction, of Mozart’s score than that one encounters in many major houses, likewise the performance of the orchestral players. (There is, incidentally, a club remix by Vince Clarke, formerly of Erasure and Depeche Mode, of the dance music in the final scene of the first act.) Yes, one loses much, though perhaps not nearly so much as one might expect, by the transposition of voices, not least in terms of the Commendatore becoming Petra (though the choice of name brings a smile to the face!) And yes, I admit that the quality of the singing varied on the night I attended. However, despite suffering from a cold, Zoë Bonner made a captivating Leo, the transposition – in character terms – utterly convincing. And in Duncan Rock as Don we saw and heard, I think, a true potential star of the future. His onstage charisma matches the deep, virile quality of his voice, and his well-honed physique certainly did no harm in this production. One had no difficulty whatsoever imagining this Don seducing anyone who caught his eye. (Rock will appear as Papageno at ENO next season; having already sung Don Giovanni for the Welsh National Opera, his career is clearly, rightly, in the ascendant.)

Don Giovanni is notoriously a graveyard for directors. I shall not list here the number of catastrophic failures I have witnessed, though two efforts by London’s major houses this season might provide context, both quite incoherent, those by Francesco Zambello for Covent Garden, and Rufus Norris for ENO. Zambello’s appeared not even to have attempted to consider the work, whilst Norris’s at best required a great deal of reconsideration. It is more or less impossible to choose between them. This setting of 1980s hedonism, liberation, and crucially, repression, by contrast seemed ideal for the work, director Dominic Gray’s larger conception and attention to detail always commendable, and at their best illuminating indeed. (And I speak as someone extremely fussy when it comes to Mozart!) 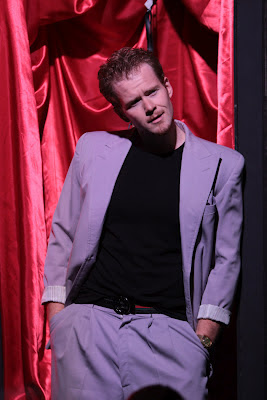 Take the final scene’s presentation of a properly Foucauldian sense of the social construction of madness or indeed disease more generally. (Hell for modernity?) Is a straitjacketed Don insane, stricken by HIV/AIDS, perhaps both? He is certainly held captive by the Hobbesian ideology of Thatcherism. (Those who relate the latter to Locke have more often than not missed the point, or at least part of the point; the strength of the state, the mysterious ‘authorities’ to which Don Ottavio in Da Ponte’s original refers, is crucial to the entire project.) As was recognised by the notorious Section 28 of the 1988 Local Government Act, rendering illegal 'promotion' of homosexuality by local authorities, supported by Michael Howard, a subsequent leader of the Conservative Party, the shop-soiled ideological remnants of Victorian Manchester liberalism needed buttressing by the poujadisme of the right-wing press. (Remember ‘Essex Man’? Was he obliquely deconstructed in the portrayal of Zac?) Libertarianism was never an especially Thatcherite characteristic. Some reviews declared the presence of Margaret Thatcher – I rather relished her obvious doubling in the person of Samantha Hull as a Club Hostess! – a mistake, but in the context of a 1980s treatment of homosexuality and societal oppression more generally, it did not seem entirely unreasonable. I am not sure that an appearance by Dame Jill Knight, Chairman – Conservative women of that ilk preferred the masculine title – of something called the ‘Child and Family Protection Group’ would have garnered much, or indeed, any recognition. More importantly, anyway, we were reminded of how issues of libertinism have, in modern times since the contemporaneous writings of the Marquis de Sade, always proved an abidingly political issue, whatever the attempts to reduce them to ‘morality,’ always closely related to the concerns of Mozart and Da Ponte.

Another great strength of the production, in contrast to so many, is its appreciation of societal distinctions. They may not be quite so subtle as those Mozart and Da Ponte craft, and of course they are different: in 1787, a society of orders stood close to revolutionary upheaval, whereas in 1987, class, despite Conservative claims, remained very much an operative concept. The attraction Zac feels towards Don is above all sexual, of course, but that is reinforced, and indeed partly a product, of the glaring contrast between Don’s riches and Zac’s poverty: the night before his wedding, he can only take Marina to a Wimpy Bar (evocatively designed by Cleo Pettit). For all the virtues of its whirlwind drama, even Bieito’s production fell seriously short in ignoring Don Giovanni’s nobility.

There are plans to tour this production following its London run. It comes highly recommended; catch it if you can. Vivà la libertà!