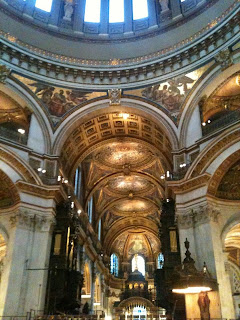 
Both the LSO and Sir Colin Davis appeared in the first City of London Festival in 1962, though not together. Short of The Trojans – which, I hear is being performed in another place at the moment – it would be difficult to come up with a more appropriate work than the Berlioz Requiem for them to perform together during the festival’s Golden Jubilee season. Forces, spatial requirements, and, I suspect, a relative lack of popularity conspire to make performances rare things: not necessarily a bad situation when one thinks of all the terrible – or worse, merely unnecessary – performances to which poor, over-exposed Mahler has recently been subjected. No such problem here: if the LSO/Davis (not to forget the superb London Symphony Chorus) Missa Solemnis at the Proms last year may ultimately prove the still greater experience, that is only because the Missa Solemnis is the Missa Solemnis. This, the second of two performances in St Paul’s Cathedral, may even transpire to be the once-in-a-lifetime event, since, when it comes to Beethoven, one can always turn to Klemperer on CD. For the Grande messe des morts, superlative though Davis’s own past recordings have been – and this was being recorded for LSO Live – the fact remains, as I can now attest, that, like Stockhausen’s Gruppen, many of the works of Gabrieli, arguably Berlioz’s Te Deum too, one simply has not experienced the work until one has heard it spatially, in the flesh. (I wonder whether the best way to hear the forthcoming CD release would be to play it, like a piece of purely electronic music, in a suitable space. St Paul’s perhaps?)

Wren’s great cathedral is not of course a concert hall and I have heard performances here entirely ruined by the evaporation of sound upwards into the dome. (One simply has not known whether they were any good.) On this occasion, I was fortunate enough to be seated just under the dome; even there, it took ears and eyes a little time to become accustomed. Eyes were puzzled by the great lag between Sir Colin’s beat and what one heard, ears by what might otherwise have sounded a little like extravagantly excessive vibrato – though what is Berlioz if not extravagant? And yet, performance combined with building, permitting spatial considerations – not just the brass bands later on, but even the passing of the line between choral sections during the Introit – to come to the fore. It was actually, even for a member of the audience, not unlike being an organist, taking building and reverberation into account. As the Introit soon made clear, Davis managed to elicit, despite the ‘individual’ acoustic, a characteristically Berliozian orchestral sound, perhaps above all from the LSO woodwind, who, like the rest of the orchestra, played superlatively all evening. Fervour and doubt – for the fervour certainly does not seem to be invested in the Almighty – combined with grandeur and intimacy. Perhaps most crucially of all, structure, at least as important here as in Beethoven, if utterly different in nature, was unfailingly delineated and rendered ceremonially meaningful. For if Beethoven’s Mass tells of titanic struggle, here we have Requiem as ceremonial, a secular successor to the great festivals of the French Revolution, even Robespierre’s dreadful, almost comically uninvolving, Cult of the Supreme Being. Struggle with the Almighty is more interesting, more involving even, whether in Beethoven’s guise or that of a thoughtful atheist such as Marx or, much of the time, Wagner; secularism, whilst at times a necessary or advisable political stance, is not a system of belief, let alone a force for drama. The strange emptiness that lies at the heart of Berlioz’s work may be understood in that light, but it has its own interest, and could not have been better served than here, the dome of St Paul’s at times beginning to remind me, disconcertingly, of the Panthéon in Paris. 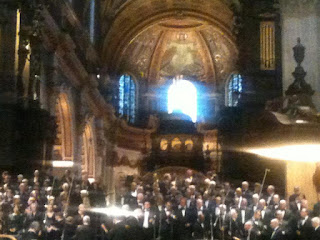 The plainchant with which the cellos open the ‘Dies irae’ sounded almost timeless, answered by sopranos and ultimately taken up by most of the forces present, doubtless a ritual more secular than mediæval, albeit with great musical rewards. (Words from the Psalmist inscribed upon the dome lingered in the mind: ‘Pse Him in the sound of the trumpet.’) The sheer weirdness of Berlioz’s orchestral interludes or interventions registered fully, even before that moment when the four brass bands made their extraordinary entry, anything but weird. This was Gabrieli to the nth degree, sending shivers down the spine, apocalypse now with brass, voices, organ, drums. I can honestly say that I had never heard anything like it before. At last, music truly for St Paul’s! And yet, historical resonances made themselves heard: the old trombone equali for All Souls or even newer equali – Beethoven, Bruckner, Stravinsky’s echo In memoriam Dylan Thomas – and, of course, Don Giovanni, which Berlioz adored. (Who does not?) A truly plaintive English horn (Christine Pendrill), with its strange amalgam of chant and the ‘Scène aux champs’ from the Symphonie fantastique, signalled the very different voice of the ‘Quid sum miser’. Choral tenors sounded universal rather than personal; this is not Bach. And yet, one was taken back to the twin intimacy and formality of Gluck – the obsequies of Orfeo – as well as to the Revolution.

‘De profundo lacu’ in the ‘Rex tremendae’ truly sounded as a bottomless pit, Dante almost having nothing upon it, and yet of course this was a relatively brief visit, especially when contrasted with the ‘Dies irae’. Equally telling were the imploring calls – though imploring whom? – of ‘Salva me’, followed by reiteration of the awe-inspiring ‘Rex’: ‘tremendae’ indeed. The ‘Quaerens me’ featured ravishingly beautiful choral singing from the London Symphony Chorus and London Philharmonic Choir, neither of which ever seemed to put a foot, or even a toe, wrong. As for the ‘Lacrimosa,’ well, however does one set this after Mozart and the inescapable mythologising that surrounds his final masterpiece? Berlioz’s deeply unsettling and yet magnificent solution resounded fully before consolation of sorts. The absence of God made for its own drama, as Sir Colin clearly appreciated.

I was especially struck by the fine violin playing during the Offertorium, just as much as by the ever excellent woodwind and voices. Davis’s handling of structure and meaning once again rendered all as clear as one could ever imagine, indeed more so. This was the hushed awe of an unbeliever. A sense of human hopelessness sounded in the ‘Hostias’: to whom were the prayers being made? If praying for the souls of the dead, or rather not praying for them, has always seemed to me an issue on which the Reformers had things utterly, unambiguously wrong – why ever would one not pray for the souls of fellow participants in the Communion of Saints? – then the implied competition here between divine mercy and nihilism struck a powerful dramatic chord. An orchestral sweetness that one could hardly fail to dub celestial was to be heard in the ‘Sanctus’. I did not care for Barry Banks’s Verdian rendition of his part, but that was a mere blemish, tempered by the dome. The strange impersonality of the cries of ‘Hosanna’ recalled once again Berlioz’s French forebears, ironically perhaps bringing Cherubini to mind. What the latter would have made of the cymbals at the return of the ‘Sanctus’, doing what one would least expect of them, is anyone’s guess. What mastery of orchestration there is here! And what splendid choral singing was to be heard too.

The ‘Agnus Dei’ displayed Davis’s renowned gift for taking his time, both for the sake of the music and the acoustic, those two aspects combining so as seemingly to present what Berlioz had all along had in mind. (‘Did he not write the work for St Paul’s?’ one was almost tempted to ask.) Cyclic completion, which if not exactly symphonic is not entirely un-symphonic, brought a satisfaction which, if not of the nature of a peace that passes all understanding, nevertheless passed beyond mere understanding. We heard the wisdom and cogency of a performance that seemed to sum up the devotion of a career – except that, nowadays, whenever one thinks that Sir Colin has crowned that extraordinary career, one is likely to experience a subsequent coronation a month or so later.