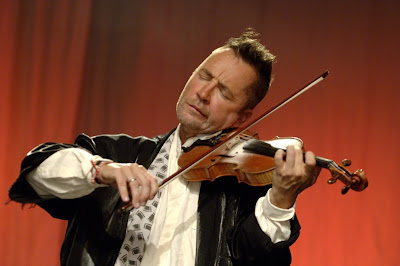 Few in the audience would, I suspected, have been present specifically for the first half of this concert, so I was a little surprised to see a few seats vacated after the interval. When it came to what made the concert memorable – and I wonder whether ‘unforgettable’ will prove nearer the mark – would be Nigel Kennedy’s performance of the Brahms Violin Concerto, and indeed what would come thereafter. Nevertheless, I ought to say something about the first half too.

Andrew Litton’s account of the Academic Festival Overture opened in intriguing Mendelssohnian fashion, its lightness putting me in mind of his fine London Philharmonic recording of the Midsummer Night’s Dream music. Later, the performance turned more excitable, closer to Tchaikovsky. I am not sure that it really added up to Brahms, but at least it was not dull. (Thank goodness, though, that that treatment was not meted out to the Tragic Overture, or the Haydn Variations.) As for Litton’s podium manner, it threatened to make the late Leonard Bernstein seem restrained.

The Enigma Variations worked better, though the emphasis tended to lie upon sharp characterisation of each individual variation as opposed to a guiding thread running through the work as a whole. Oddly, however, and despite such discontinuities, the music often sounded closer to Brahms than the overture had. The Theme was a case in point, darkly beautiful, the Royal Philharmonic Orchestra’s cellos exhibiting great depth of tone, its violins commendable sheen. Another case would be the dark tones of ‘R.P.A’. Strauss, quite properly, had a look in for the first variation (C.A.E.); admiration of course ran both ways between the two composers. The brass, especially trombones, proved splendidly raucous in ‘Troyte’. ‘Nimrod’, though its opening was perhaps a little too febrile, received a warmly Romantic rather than pious reading, followed by a ‘Dorabella’ both whimsical and sardonic. A telephone did not quite succeed in disrupting the welcome air of mystery in the fourteenth variation (*** - Romanza), ‘E.D.U.’ proving excitable rather in the manner of the preceding overture. It was good to hear the tones of the Royal Festival Hall organ ring out here.

Now for Kennedy’s ‘half’. Though I have long admired his musicianship – far, far more serious, in the best sense, than he is often given credit for – this was my first opportunity to hear him in the flesh. I was certainly not to be disappointed. Doubtless there is hyperbole in his programme booklet declaration that ‘Bach, Beethoven, and Brahms are the raison d’être of classical music,’ but it remains refreshing to hear voiced so unapologetically the broader point being made, namely the centrality of Austro-German music: ‘At the Yehudi Menuhin School, it as made clear to us that central Europe is central to all that is good in classical music.’ And I find it difficult to disagree with Kennedy’s opening gambit: ‘It is a privilege to be playing what is probably the greatest violin concerto of them all for you guys this evening.’

It seemed as though Kennedy’s thoughts had rubbed off on Litton, for the opening tutti of the first movement sounded far more traditionally ‘Brahmsian’ than the Academic Festival Overture had. That is not to say that it was dull, or even sturdy, for it proved full of light and shade, but crucially there was a far stronger sense of harmonic rhythm, answered in turn by an electric – no, not in that sense – appearance of musical virtuosity on Kennedy’s part. (As he so rightly and indeed necessarily put it in the programme, ‘Unfortunately, for some modern proponents of violin playing, a fantastic technique and sound production are not (as in some other concertos) sufficient to tackle the philosophical demands of Brahms’s composition.’) Kennedy’s performance was to prove a standing riposte to emphasis ‘purely on gaining technique’, which he associates with much conservatoire teaching, not least ‘at the Juillard School of Boredom,’ where he studied alongside Litton. For, from the outset, his shaping of phrases and his sounding of the connections between them, spoke of true musical understanding. The sweetness of his tone, moreover, spoke of a wonderfully ‘old school’ approach, sounding almost midway between Heifetz and Menuhin, if you can imagine such a thing. Soloist and orchestra were palpably alert to the demands of the score as musical drama, to its playing out within and through Brahms’s concerto form. It was clearly above all Kennedy’s reading: Litton visibly followed his soloist’s rubato. Yet, in a performance that balanced formal demands with quasi-impovisatory calls arising from Kennedy’s not unreasonable belief in the importance of the gypsy tradition, there could be no complaint on that account.

That sense of the improvisatory came to a head in the cadenza. Kennedy, perhaps unsurprisingly, prefers the fantasy of Kreisler here to Joachim’s standard version, ‘very strong structurally but sadly lacking in pathos’. However, he elected instead to provide his own, apparently improvised, cadenza. Alarm bells might have rung upon reading the statement, ‘During this, you might detect my belief that Brahms loved gypsy music and that, therefore, if he had had the same access as we do to, say, Indian music or the blues, he would probably have incorporated these equally important types of community music into his work as well.’ What we heard proved rather less outrageous than one might have hoped or feared, at least during the purely solo part. Hints of ‘world’ music manifested themselves more strongly as the cellos began to sound a pedal point, cellos joined by other strings, and eventually by the entire orchestra. Yet there was surprisingly little sense of incongruity, and what there might have been was more than outweighed by the soloist’s personality and sheer communicative skill.

The slow movement was blessed by beautiful, characterful woodwind playing, not only from the oboe (John Anderson). Kennedy’s spinning of the violin line was ardent yet variegated, vocal yet indisputably instrumental. It was a more rhapsodic approach than one often hears – a characteristic that on occasion slightly foxed the orchestra – but there were no grounds to associate that with any lack of structural sense, line being maintained as if this were a great aria, or perhaps better, a song without words.

Likewise, in the finale, clearly channelled through the personality and to an extent the delivery of a gypsy musician, form remained clear and meaningful. The orchestra sounded reinvigorated and the results were thrilling. Though there was nothing wilful or distended about the performance, quite the contrary, it would probably have been more likely for Kreisler – or the ever-open-minded Menuhin – to smile upon it than for Joachim to have done so. Frankly, it was a struggle, and I am sure that Kennedy would maintain it to be a futile struggle, to keep one’s foot from tapping along with his. If Nietzsche maintained that much of the problem with German music was its dissociation from the dance, famously celebrating Carmen against Wagner, he perhaps should have heard this.

There was more, of course, to come. After a little joking around, including a proposal of marriage to leader, Clio Gould, Kennedy engaged in an utterly spellbinding duet with principal cellist, David Cohen. As scintillating, in-authenticke a performance of the Handel-Halvorsen Chaconne as one could every hope for – and then a great deal more – was our treat. Virtuosity and musicianship sounded in equal measure from both parties; what was perhaps most enthralling was to observe, indeed viscerally to feel, their response toward each other as chamber musicians. How rehearsed it was, I do not know – Kennedy referred to a ‘sort of rehearsal’ in Nottingham – but it sounded, if you will forgive the cliché, newly minted. A gypsy-style medley ensued, first with Cohen ‘accompanying’, but soon joined by the rest of the RPO strings, some of them also offered solo spots. It was great fun, and more than that: testament to Kennedy’s very real sense of music as a communal activity. Truly, there is only one Nigel Kennedy.