Salzburg’s new Meistersinger proves beyond a shadow of doubt, in the unlikely event that such proof were needed, that Stefan Herheim is the most intelligent, most thoughtful, most theatrical, and – most important of all – most musical stage director of Wagner and perhaps of opera tout court today. There is nothing worse, even the arbitrary setting of an opera in ‘an empty swimming pool or a slaughterhouse’ (see wagneropera.net’s revealing interview with Peter Konwitschny, perhaps Herheim’s only, though less consistent, competitor), than a mindless ‘traditional’ staging. As Speight Jenkins,  general director of Seattle Opera, argued in a career retrospective I heard him give in Seattle earlier in August, ‘traditional Wagner’ is a matter of a ‘rock and tree’, and let the singers get on with it; Jenkins recoiled from, indeed quite rightly attacked, the idea that Seattle’s ‘green’ Ring has anything to do with that. There is nothing Wagnerian – it is little exaggeration to think of Wagner as our first operatic stage director – about the bad old days of ‘park and bark’. Moreover, there can be few more gross insults to Wagner, theoretician of the ‘emotionalisation of the intellect’ (Gefühlswerdung des Verstandes), than to insist instead upon intellectual abdication; should you seek brazen ‘infidelity’ to the ‘Master’, look no further than the world-view, such as it is, of Nietzsche’s ‘Wagnerians’. (Concert performances are of course a different matter entirely; I face here the difficult truth that the two greatest Ring performances I have experienced have both been of that ilk, or rather semi-staged: those by Bernard Haitink and Daniel Barenboim at, of all places, the Royal Albert Hall. But then, I and the world at large are still waiting for Herheim’s Ring.)

There are countless ways to approach even a brief outline of Herheim’s staging – and even when one has seen it but once. (Doubtless, as with his Parsifal, subsequent viewings will reap further, dialectical rewards.) We might usefully start with the conception of Meistersinger as Hans Sachs’s dream, but fascinating though that idea and its implications may be, equally important, and indeed unavoidable in any discussion, is Herheim’s interrogation of dreams and indeed of his own Konzept. In that, of course, he both mirrors and interrogates Wagner’s own conceptions of dreams within the work. One is always aware of the latter, yet it is striking how heightened the role of dreams in poem and music becomes when an intelligent, sympathetic director heightens intellect and feeling, bids them become one. In the first act Prelude we see Sachs in his nineteenth-century workshop, dreaming, like Wagner, of a Nuremberg, which, like the ‘traditional’ productions of ‘traditionalists’, never was; we proceed to see – and to hear – how he creates, not recollects, before him and us a Nuremberg of his own time. Similarly, Wagner declines in the score to employ even the most cursory reference to Renaissance music; his guiding spirit here is Johann Sebastian Bach, or rather his own creation of Bach, the ‘history of the interior life of the German spirit,’ according to the contemporary essay What is German?  Invention of tradition is seen elsewhere, just as we hear it throughout the score. The Masters’ Nuremberg, now seen at a time of renewed crisis for the guilds and other corporate institutions, is shiny, new, a little insistent, a little desperate. I could not help but think of the Tand both of Sachs’s peroration and of Loge’s description of the Rhinegold. All that glistens, be it in the Rhine or at a guild meeting, is not necessarily gold; indeed Sachs, rightly or otherwise, will condemn it as the very thing the Masters insist it is not; ‘wälschem Tand’, foreign vanity.


The ‘real’ world – but is it ‘real’ at all, when we, like Wagner and perhaps like Sachs, read from Schopenhauer? – both disappears and yet remains, projected onto the curtain a night-capped Sachs opens and closes, with increasing difficulty, at the beginnings and ends of the first two acts. Yet the dream world, initiated erotically by Sachs’s sexual approach to Eva in the church, is made up of what he knows, and of what his – and Wagner’s – culture knows. His writing bureau, magnified, becomes the organ, as indeed the furniture generally provides a Nutcracker-like magnification and intensification for the Wahn of the second-act riot; a painting becomes Eva. Most challenging of all, Beckmesser finally becomes Sachs’s alter ego, emerging for a curtain call in matching night dress: a move equally alert to the comedy and to the darkness at the heart of a work whose profundity lies in precisely the matters faux ‘traditionalists’ from the Nazis, and indeed still further back, would ignore and preferably bury. Or is it the other way around? Does the organ, resplendent as a nineteenth-century, Gewandhaus-like invention of tradition, become Sachs’s bureau, and thus nourish via tradition, in a proper sense, his creations, whether artistic or social (manipulation of Wahn more generally)? It is not either-or, of course; Wagner and Herheim are both dialecticians, and so must we, as a responsive, responsible audience, be too. A bust of Wagner makes its ambiguous, multivalent point without exaggeration. 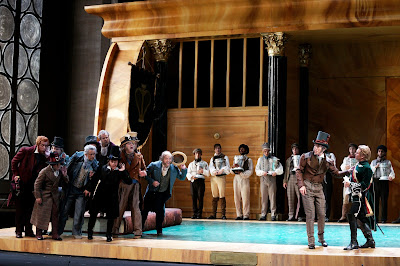 Perhaps most telling on a structural level is the way in which Herheim’s staging traces, or rather instigates, Sachs-like manipulation of Wahn – and doubtless Wahn’s manipulation of Sachs. Just as Walther, his song, and Nuremberg’s public are guided, so too are Sachs’s dream and Sachs’s reality. Yes, there are proto-fascist undertones there for those who wish to find them, as suggested by the chilling lighting of a semi-crazed Sachs during his final peroration, yet they may always readily be understood in a multitude of other or at least additional ways; a signal strength of Herheim, as Wagner, is that he asks questions that are too great to be banally ‘resolved’. When, then, the third act begins, the drama continues, but Sachs is in ‘real’, that is night, dress. Has he made the terrible realisation of Schopenhauer’s philosophy? Has he lifted, as does Wotan, through Brünnhilde, the veil of Maya, the principium individuationis, seeing and feeling in the carnage of the world, whether on the banks of the Pegnitz or of the Rhine, not only ‘suffering humanity’, but also a ‘world that passes away’? One can hardly fail to think of Tristan, too, when it comes to such clever game-playing between night and day. And yet, Meistersinger is not, of course, Tristan, not least since Sachs would not become King Marke. That truth is borne out not only in the third act, but even during the Prügelfuge at the close of Act II. The glow worm who could not find its mate, to whom Sachs will refer in the following act, is seen in the mêlée desperately – and graphically – trying to find a replacement. This is no world of idealised Romantic or even sexual love; it is clear-eyed, brutal as the Will itself. And so, the creation of the third act, Wagner’s and Sachs’s, both breaks with and incorporates what has gone before, like the Prize Song itself. 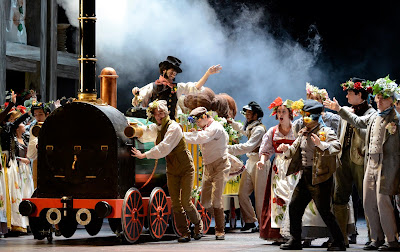 What else? The world of fairy tales enters explosively, erotically, frighteningly, during the second-act riot. They also reappear in the following ‘reality’, Red Riding Hood chased in Sachs’s workshop. The Brothers Grimm live in Wagner’s, Herheim’s, and our, imagination; so does Freud, even before the letter. A steam locomotive, recalling Germany’s very first railway line, between Nuremberg and Fürth, brings the girls from the latter, yet they are not quite what they might have been; instead, they are nightmarish dolls. Who is dreaming now, and of what? We also recall Adorno’s critical observations on technology and the instrumentalisation of reason, both in the stagecraft and the very idea of such a production itself; in Schiller’s well-worn yet indispensable typology, this is no ‘naïve’ art, but ‘sentimental’ art with a vengeance. One makes connections, and they will probably be different for each audience member, probably different for each viewing by the same audience member. That is successful theatre direction. For Herheim never forgets that this is theatre; every observation is keen, every member of the chorus is his or her own person; yet by the same token, he never presents effect without cause (Wirkung ohne Ursache: choose from Wagner on Meyerbeer, or Nietzsche on Wagner, according to taste, or indeed reject the terms of the choice itself).

If I have written at greater length on the staging than I shall on the musical performances, that is not because I think the latter realm of intrinsically lesser importance; quite the contrary. It is partly because I wished to suggest Herheim’s production formed part of the musical performance, but also partly because, all in all, it was the exemplary experience of this particular night. Daniele Gatti’s conducting of the Vienna Philharmonic surprised me somewhat, especially during the first act, which sounded – and, in terms of the number of strings, I suspect was – somewhat small-scale. Yet as the work progressed, one realised that Gatti’s conception was dynamic in a very real dramatic sense, complementary to that of Herheim, but not identical – representing, furthering the relationship between Wagner’s poem and music. The score bloomed, darkened, expanded as the drama itself; the orchestral performance could be understood to have instantiated a similar dialectical strategy to that of Sachs’s dream. It is certainly not the only way to perform Die Meistersinger, but the scattered boos Gatti – uniquely and undeservedly – suffered seemed more likely to have emanated from those who thought the work ‘must’ sound like a particular recording or misremembered performance from a ‘golden’ age that never was than from thoroughgoing critique. The VPO was not exactly on vintage form, however, sometimes offering a thinness of string tone that went beyond Gatti’s initial chamber imperative. ‘Tradition’ in that case had something in common with Mahler’s Schlamperei. 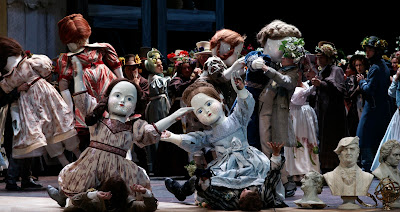 Michael Volle’s Sachs was the undoubted star on the stage. In full command and sympathy with music, words, and production, he inhabited the role, made it his own, and offered more rounded a portrayal than I have ever previously seen on the stage. The Wahn monologue was all the more moving for emerging from what had already passed; this was no mere set piece. Markus Werba offered a finely-honed Beckmesser, navigating with apparent ease – though, like the mediated Prize Song, that ease can only have been apparent – the tricky balancing act between malevolence and Malvolio, learning and charlatanry. Werba did not make the common mistake of unduly dignifying Beckmesser; nor, however, was his creation in any way a caricature. Roberto Saccà experienced certain moments of strain; yet, by any reasonable standards this side of Sándor Konyá, his was an estimable assumption, welding words, text, and stage action in a properly Wagnerian unity. Anna Gabler, as his intended, was at times a little bland of tone, but acted well. She was outshone, however, by Monika Bohinec’s Magdalena, who, in Herheim’s hands, offered a far more interesting second-act Magdalena-as-Eva than I have seen, a true dramatic engagement with and reaction to Beckmesser’s serenade without singing a single world. Not that she could not sing too. Peter Sonn’s David was bright and bushy-tailed, without offering anything especially distinctive, but there was experience aplenty in Georg Zeppenfeld’s Pogner and Oliver Zwarg’s Kothner. The other Masters were a characterful bunch, and not only on account of Herheim’s alert Personenregie, and the choral singing was pretty much beyond reproach.

This was undoubtedly the best Meistersinger I have seen. The Paris co-production and rumours of a trip to the Metropolitan Opera will offer opportunities that should be grabbed with open arms; if only Covent Garden would join the party...