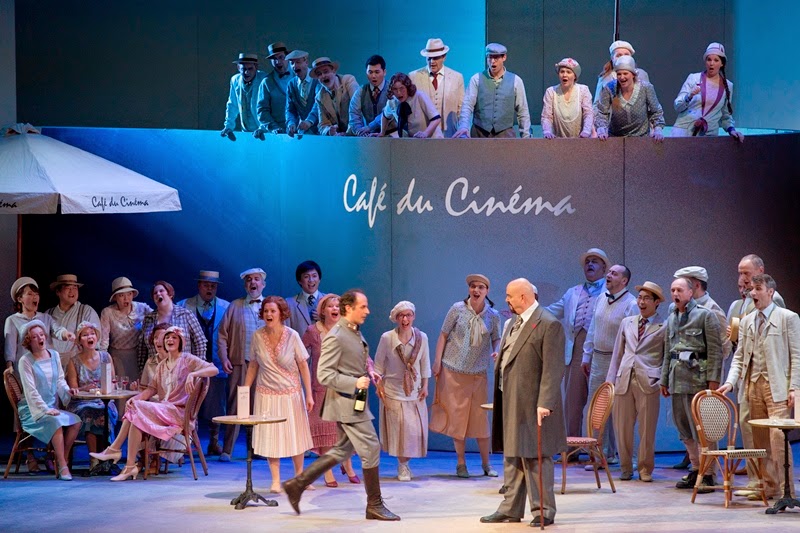 For reasons that remain unclear, Manon Lescaut seems recently to have become ubiquitous. In the United Kingdom, both Welsh National Opera and the Royal Opera are offering new productions this season. Sir Simon Rattle has been leading the Berlin Philharmonic in this, his first Italian opera; Munich will soon be staging it; and so on, and so on. Doubtless the plans and availability of ‘star’ singers, not least Jonas Kaufmann, play a role, but that does not seem to be the whole story. A good few stagings of, for instance, La fanciulla del West, suggest that houses and audiences may be keen to hear Puccini works beyond the central triptych of Bohème, Tosca, and Madama Butterfly; maybe they are even tiring of those dangerously over-exposed works. Leipzig got in a little earlier with this 2006 production by Giancarlo Monaco, conducted at its premiere by Riccardo Chailly, and now revived under Anthony Bramall.

The version employed, the 1893 original version for Turin, as edited by Roger Parker for Ricordi, was Chailly’s choice. Though Puccini would continue to tinker, in particular long Manon’s fourth act aria, ‘Sola, perduta, abbandonata’, until reinstating it, slightly modified, for the thirtieth-anniversary performance at La Scala in 1923, the principal difference here concerns the first act finale. Before both the vocal score was published and the first La Scala performance (1894), Puccini followed Luigi Illica’s suggestion and wrote a different ending. Here we therefore heard what Mosco Carner, in his New Grove article on the opera, describes – justly – as a ‘conventional pezzo concertato, based on the melody of “Donna non vidi mai”’. Chailly considered this original finale ‘more serious’, drawing Wagnerian comparisons. I wish I could hear them, for frankly, to my ears, the first act as a whole is ultimately rather dull, considerably less characteristic of the composer than the second act, let alone the much stronger third and fourth – which seem to me to have more of Wagner in them too. (Puccini had visited Bayreuth n 1889 and 1890.) Still, for those with ears to hear, this is clearly an interesting opportunity to hear Puccini’s first thoughts.

The Leipzig Gewandhaus Orchestra played splendidly, gaining depth and lustre as the score did the same. The Wagnerian harmonies – Tristan a little too obvious perhaps, though one might say the same of some early Schoenberg too – of the Intermezzo registered with a golden glow that was very much this great orchestra’s own. Bramall kept the score moving, but although a disinclination to bend the knee to sentimentality can only be applauded, there were occasions when he might have relaxed a little more, stiffness sometimes replacing a more natural ebb and flow. (A more ‘Wagnerian’ approach would certainly be welcome here.)

The principal problem, however, was Nadja Michael’s assumption of the title role. As with  other occasions I have heard her – Salome at Covent Garden, for instance – she seemed incapable of singing in tune. Vibrato of a variety that occludes distinctions between one or two degrees of the scale may or may not be overlooked. Persistently flat intonation, of a nature that had one wondering whether she was attempting ‘historically informed’ or maybe ‘deformed’ Puccini at Baroque pitch, is another matter again. Michael, as is her wont, threw herself enthusiastically into the role and exhibited undoubted stage presence, but musical considerations can hardly be cast aside here. That said, matters improved – somewhat, though far from entirely – in the third and fourth acts. Her gymnast’s bow during the curtain calls proved equally memorable. To his great credit, José Fardilha held his own with respect to intonation: no mean feat in duets. His was indeed a creditable performance throughout: typically Italianate in spirit, but fully in technical control. The other particularly impressive performance was James Moellenhoff’s Geronte, dark and deep of tone to an extent that suggested a Prince Gremin. Smaller roles were well taken, and choral singing was of a high quality throughout.

The chorus moved well on stage too, its blocking adding distinction to Monaco’s attractive, if ultimately somewhat conventional production. Despite the updating to the 1920s and certain cinematic references, it was difficult to glean any particular insights. The madrigalists looked a little too much like refugees from an imitation Otto Schenk Rosenkavalier to convince for Paris. Still, Johannes Leiacker’s set designs and Birgit Wensch’s costumes retained their period lustre, and the starkness of the desert for the fourth act offered welcome contrast, also permitting one to focus more or less entirely on the plight of the doomed lovers. A silent film interlude, taken from Arthur Robinson’s 1926 Manon Lescaut, opened the second act; it did not, however, fill in the gap in the action, that is, when the lovers live together, but rather foretold what was to come. Perhaps surprisingly, no such footage was used during the Intermezzo. It was a little difficult to understand why.