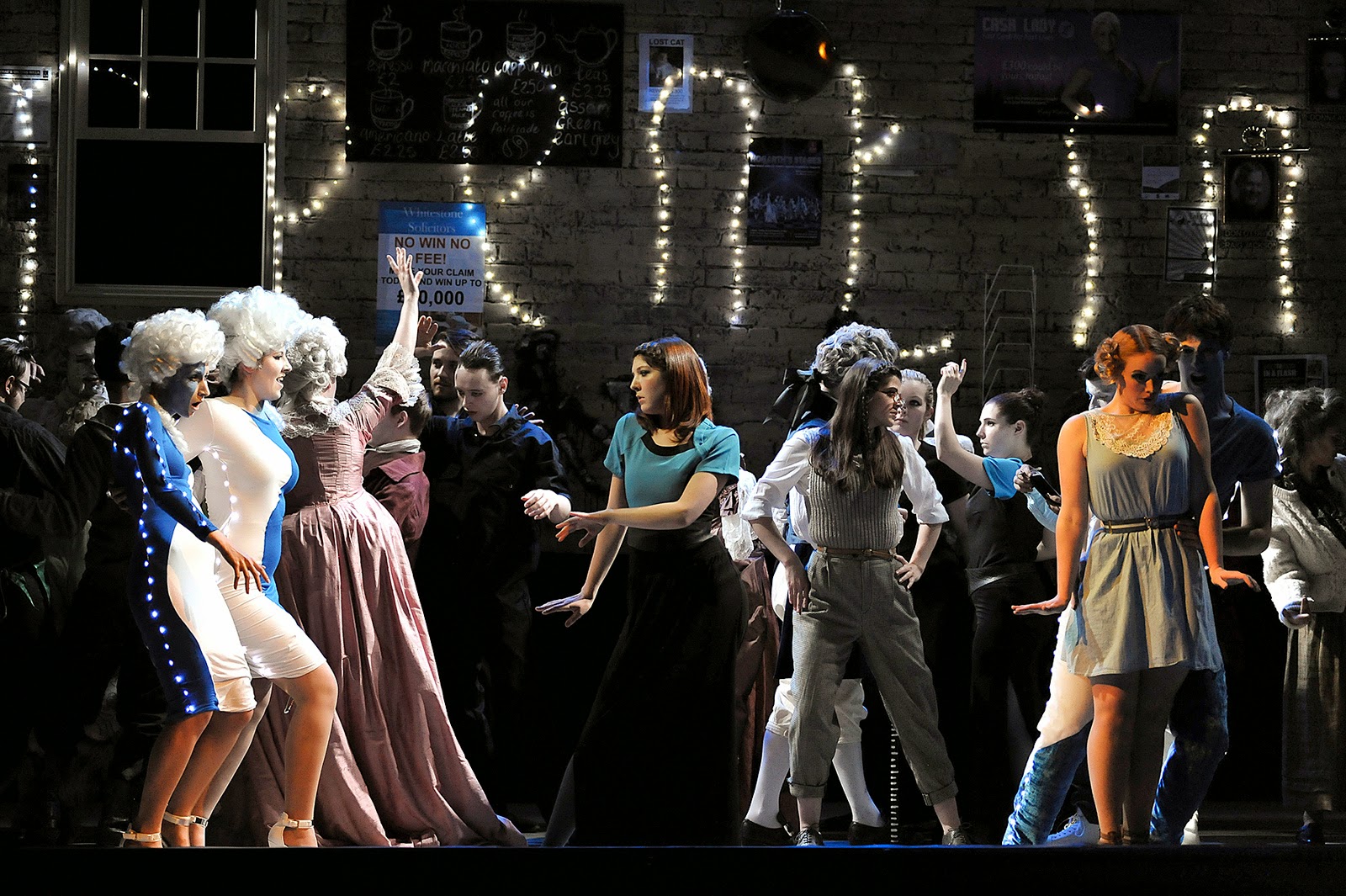 Edwin Hillier: Serpentine; or, The Analysis of Beauty

It is a brave composer – or indeed librettist – who writes a Hogarth opera in the wake of The Rake’s Progress. Yet those concerned seemed neither to have been intimidated nor hamstrung by the precedents of Stravinsky or Auden and Kallman. Indeed, it was striking that there seemed to be no ‘leave-taking’ in that sense at all. We had instead five short operas, of roughly a quarter of an hour each, inspired by different paintings and engravings, yet contemporary in their settings, brought together as more than the sum of their parts by Bill Bankes-Jones staging and Sarah Booth’s designs, in which eighteenth-century periwigged onlookers mingled with their twenty-first century counterparts. Traffic included characters from previous operas, encouraging one to make connections, rather than too strenuously insisting upon them. Tim Murray and the excellent RCM Opera Orchestra offered excellent advocacy, as did an array of young singers.

Not the least remarkable aspect of the evening was that all five composers are RCM composers: four of them Master’s students, one an undergraduate. With that in mind, and without in any sense intending to condescend, it is unlikely that many, perhaps any, of the composers will write as they have done here once they have fully discovered their mature ‘voices’. Yet they all proved themselves assured writers, employing a variety of styles. In the crudest sense, the musical language employed in Hogarth’s Bastards by Hunter Coblentz stood closest to the nineteenth century, that of Edwin Hillier, in the closing Serpentine, stood closest to the later twentieth and early twenty-first, the other composers falling somewhere in between.

On False Perspective, music by Josephine Stephenson, libretto by Benjamin Osborn, opens with an eighteenth-century reader (Professor) of John Joshua Kiry’s pamphlet on linear perspective, for which Hogarth provided the frontispiece, A Satire on False Perspective. That introduction frames – visually as well as metaphorically – a Sunday morning’s exchanges in a modern café ‘in the city of false perspective’, the morning after the police shut down a rave that broke the laws of physics. Water flows backwards and falls upwards, at the barista’s behest. In Stephenson’s score, one hears the musical counterpart to such antics, though the score never merely ‘depicts’; it contributes to the drama, as good operatic music should. Likewise, each one of the singers here – as in the subsequent operas – added something both musical and dramatic, indeed showed the danger of separating the two categories.
And so, the scene was set for The Bet, for which Algirdas Kraunaitis wrote both text and music, and for Now (music: Lewis Murphy; libretto: Laura Attridge). Visual framing connected On False Perspective with The Bet, but there was rhythmic contrast too, between all three scores. Dance rhythms appeared in different guises, sometimes more Germanically swung, sometimes more insistent, even perhaps Stravinskian. Instrumentation was resourceful, command of colour imaginative and apt. I must admit I could not quite understand why one character in The Bet was made to sing with a cod-American accent, ‘g’ omitted from the ends of gerunds, and so on; it jarred, at least to my ears. But again, the singers as a whole impressed, showing splendid commitment and versatility. Dystopia came to the fore in Now, but equally some sense of resolution, even hope.


The second half offered the aforementioned ‘extremes’ of Hogarth’s Bastards and Serpentine. The former (Coblentz/Jordan O’Connor) offered interaction between five singers prior to a performance in an apparently disastrous run of Don Giovanni. Coblentz’s score is allusive and witty, even in its allocation of Don Giovanni to a counter-tenor (the excellent Tai Oney). I was not entirely sure, though, why the audience found use of ‘fucking’ in the libretto so hilarious; doubtless there is a matter of confounding alleged expectations, but even so… There is nice characterisation, though, in O’Connor’s text: a good deal is done in a short amount of time.

Serpentine; or, The Analysis of Beauty (Hillier; Edward Allen) was for me perhaps the most intriguing. Structure and instrumentation interact with dramatic possibility suggestively. The necessity both to ‘toe the line – the Serpentine Line’ in a club, measured up by the Architect, combines with a clear sense of liberty, or perhaps license. Hogarth’s eighteenth-century dance hall is reimagined, the ‘S’ figure curve visualised on stage and somehow also suggested by Hillier’s music. There was some exuberant transvestism to be enjoyed too. This seemed more dangerous, more exploratory, perhaps more ready to question what opera is and what it might be. That said, the truly striking impression of the evening was of an abundance of talent from all concerned: there is hope yet for a form which has always been far better placed to re-invent itself than the exaggerated prominence of its largest and often most conservative institutions might suggest.