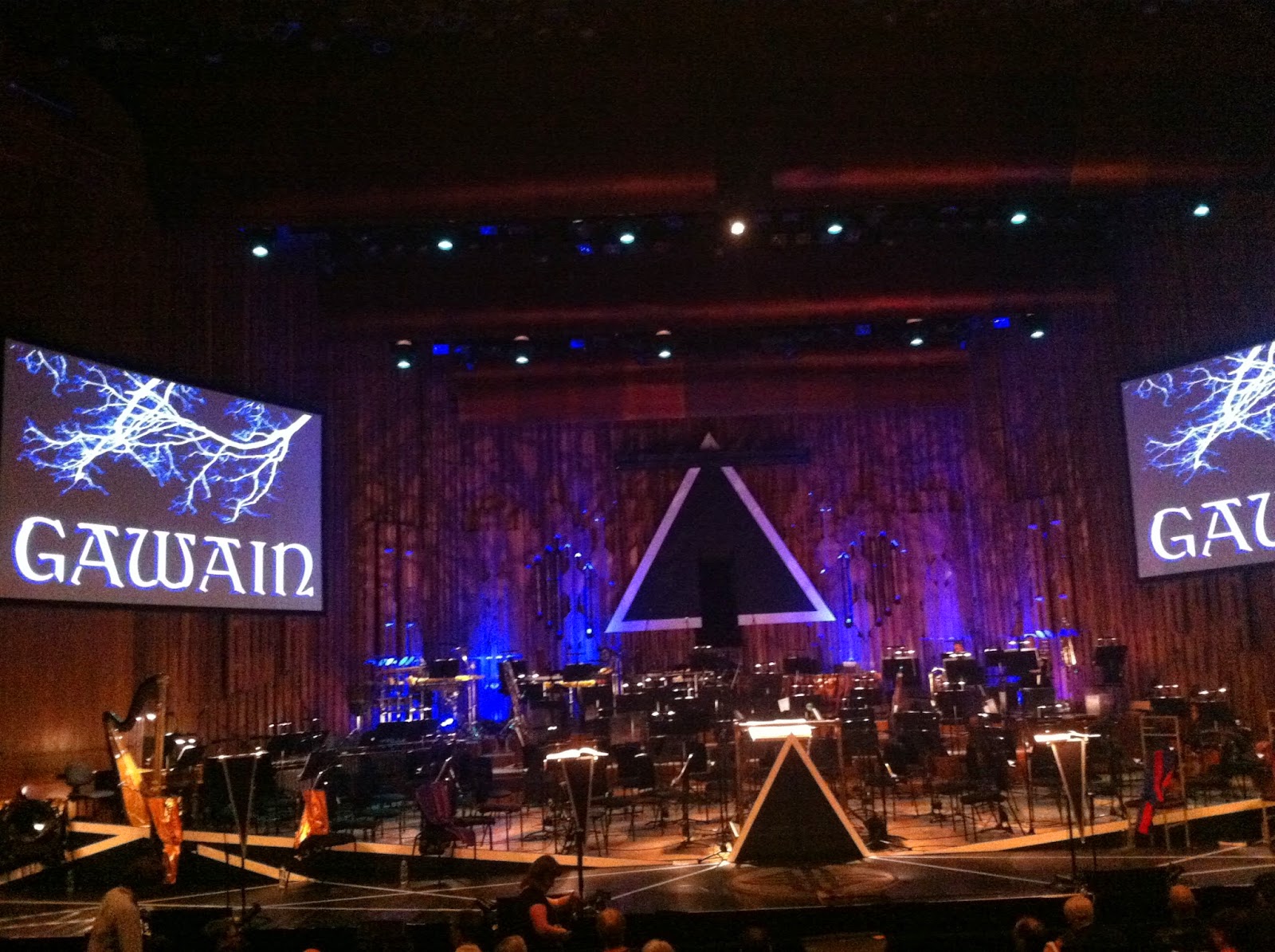 This was a truly outstanding performance, thoroughly worthy of its standing ovation. The only problem now will be of upholding such standards throughout the Barbican’s Birtwistle at 80 series. This was something no one present is likely to forget: a masterpiece, whose absence from opera houses, not just in this country but across the world, stands as a devastating indictment to all concerned, was given a ‘concert staging’ to match the finest efforts of any established house.  Last year’s Salzburg staging – incredibly, the only one since Covent Garden’s premiere and revivals – performed a signal service in bringing Birtwistle’s opera to an international audience, but a questionable production detracted somewhat from the impact of an excellent musical performance. Here, John Lloyd Davies’s unfussy direction did all that was necessary – or at least seemed to be necessary – with the support of excellent lighting. Quite whether the projections were necessary, I have my doubts, but they did no especial harm either.


A happy surprise was the reinstatement of the full version of the Turning of the Seasons, which I had never heard before. What utterly magnificent music this is – and, equally to the point, musical drama which strongly reinforces the power of ritual in this opera. Gawain’s year-long journey reminds us of the crucial importance of the passing of time; actions are not here merely repeated, revisited, viewed from different standpoints. There is surely a strong comparison to be drawn here with Siegfried’s going out into the world, ‘zu neuen Taten’, and of course both Wagner and Birtwistle question, indeed deconstruct the notion of heroism. As the disillusioned Gawain insists, he is not, almost certainly never was, that hero the court, the world had imagined him to be. That unnerving experience of returning to a place, to people, and it, they having carried on without one registered all the more powerfully, even chillingly. A stronger sense of the passing of time was gained, then, but so was a stronger sense of the sheer power of ritual, in this case of the calendar and of man’s relationship to it, ambivalently positioned as it is in this case between Church and something closer to paganism. Speaking to other audience members during the interval, some, though by no means all, seemed to have struggled with the consequent greater length of the first act. I did not feel that at the time, but admit to noting thereafter a certain imbalance with respect to the first and second. That need not necessarily be a bad thing, but I could not help but wonder whether a second revision might be in order. Perhaps the Turning of the Seasons could become a second act tableau in itself; perhaps it might be split between the two acts, for, as Birtwistle has noted, many of his works have a tendency to ‘stop’ rather than to ‘end’. (I am not sure that that is really the case with this work, which is in many ways more conventionally operatic than many give it credit for, but the point may still stand in general.) At any rate, experiencing this additional music for the first time was an overwhelming experience in itself; moreover, it permits more to be heard from Guinevere, Bishop Baldwin, and the chorus. I understand – I think – the case for the revised version, but I should now never wish the cuts to be reinstated. In practice, though, I shall have to take what, if anything, I am given.


Martyn Brabbins led a superlative performance from the BBC Symphony Orchestra, the splendid BBC Singers (conducted offstage with equal excellence by Andrew Griffiths) and what I suspect may be the finest cast the work has yet received. The BBC SO’s contribution was almost beyond praise, every inch the equal of its Vienna counterpart last summer. It is perhaps all too tempting to resort to ‘national’ stereotypes, and maybe this was as much a matter of staging and venue, but I think I perceived a more generally internationally modernist Klang from the ORF Vienna Radio SO, and a more deeply English – but certainly not remotely nationalist – melancholy from the BBC orchestra. That is not to say that the violence of Birtwistle’s score did not register; it most certainly did, to searing effect. Nor that the powerful Stravinskian antecedents did not register. One may hear a fascinating struggle between a world born of Symphonies of Wind Instruments and one born of The Rite of Spring: doubtless an over-simplification, but perhaps not entirely gratuitous. The welding together of primitivism, mediævalism, and (Northern) English landscape was perhaps achieved still more idiomatically by Brabbins than by Ingo Metzmacher, matching the distinguished contribution by Elgar Howarth on the CD recording from the Royal Opera House. (Alas, that was made at a revival, so has the revised version of the score, but it remains an absolute ‘must’ for anyone who remotely cares about twentieth-century opera.) The brass – including three tubas and a euphonium – proved as powerful as any more celebrated section, but with none of the brashness one sometimes encounters from American orchestras in particular. A battery of percussion unleashed its fire at times, yet also offered true delicacy, not least in the guise of that unforgettable cimbalom part. Uneasy magic was conjured up – the observed and observing malevolence of Morgan le Fay? – from the woodwind, whilst the strings worked over-over-time throughout: incisive and, yes, at times beguiling. Courtly love and eroticism were given their due; one cannot deconstruct without in some sense having constructed.


Such was also the tale of the vocal performances. Leigh Melrose summoned up memories of his fine ENO Wozzeck as Gawain, and yet went further still. Very human choices, fears, and disappointments made the descent – or should that actually be ascent? – from his initial swagger all the more affecting. Sir John Tomlinson was his inimitable self, a true force of nature, if the more or less unforgivable cliché may be forgiven, as the Green Knight. An ‘objective’ review would have to mention the indulgence that needs to be offered to his higher range, here not so often employed, but frankly such cavils seem irrelevant in the face of so all-encompassing a dramatic assumption. The day will come – at least, we hope it will, if our opera houses will listen – when another bass will have to take on the role, but for the moment, the archetypal, apparent timelessness of this performance makes it impossible to imagine. For Tomlinson, moreover, there was no need for a score. Jennifer Johnston made a glorious impression as Lady de Hautdesert the wife of his alter ego: rich, even voluptuous, of tone, nicely ambiguous of purpose, and yet imparting something very important concerning the human and perhaps especially the female condition as constructed here. Laura Aikin was equally magnificent as Morgan le Fay. The cruel demands of the role clearly hold no fears for her; far more than ever before, I had the sense of her as a real character, as the moving force of events. Perhaps the longer version played a role in that; her manipulative appearance onstage – unseen to the hero – when Gawain arrived at the Hautdeserts certainly did. It was, however, an interpretative consequence too, born of vocal strength and palpable musical intelligence.


Jeffrey Lloyd-Roberts and Rachel Nicholls made for an excellent royal couple, as attentive to words as to vocal line. William Towers made more of the role of Bishop Baldwin – again, doubtless partly a matter of the version, but not only that – than I had previously heard. His is a virile counter-tenor, put to piercing, perhaps sanctimonious use here. I certainly found myself asking more about the character, his role, his motivations, than I had done so before. John Graham-Hall fully inhabited the role of the Fool; there was an entirely appropriate correspondence with King Lear to be made in this case. Ivan Ludlow and Robert Anthony Gardiner offered finely sung portrayals of Agravain and Ywain. There was not a weak link in the cast, just as there was not in the evening as a whole. A resounding triumph! Now which company will do its duty and give us a properly thought-through new staging?