At last: something at the Royal Opera to replace Jonathan Miller’s slapstick onslaught on Così fan tutte, not only the most sophisticated, most profound of Mozart’s operas, but the most sophisticated, most profound opera of all. (At least, that is how I feel at the moment.) It broke my heart to hear Colin Davis, conducting the greatest musical performances of the work (2007 and 2012) I have ever heard and am ever likely to hear, undermined at every juncture by Miller’s antics. Alas, the good news is not unmixed. It rarely is, of course; however, once again, we see and hear a split between music and production: not, I think, a productive mutual questioning, but just a dissociation. The fault, I am sorry to say, lay squarely with the production, although it was compounded by different – both valid, but undeniably different – conceptions of the work from conductor and singers. I suspect that some issues will be resolved as the run proceeds, but it is difficult to imagine that they all will be, especially when it comes to Jan Philipp Gloger’s production – although, paradoxically, I suspect that the lively young cast might even salvage something from that once the director is out of the way.

My sole previous encounter with Gloger’s work had been at Bayreuth. A weak irrelevant Flying Dutchman did not augur well, but everyone deserves a second chance. Even in the Bayreuth Festspielhaus, I found ‘too many instances where the action, especially for a relatively small theatre, was on too small a scale properly to understand, or was simply, at least to me, obscure. I had the sense that there was a better production waiting to break out.’ Much the same might be said about this Così fan tutte, save that, in a larger theatre, especially from the Amphitheatre, some of the problems of scale are amplified. In both productions, one has a sense of a good idea or two, anything but original, indeed seen in many other stagings of the work in question, obscured by both a director who thinks his production is far cleverer than it actually is, and by a certain lack of basic theatrical craft, the designs, impressive though they may be, being made in the absence of anything else, to do, or to try to do, far too much of the work for themselves.

The production begins, reasonably enough, if in wearisomely clichéd fashion, with an attempt to set up its metatheatrical stance. During the Overture, a cast in ‘period’ dress – presumably a ‘traditional’ production in our here and now – takes its bows in affected style. There is an element of welcome surprise when our real cast, apparently members of the audience, rushes into the Stalls in fashionable, contemporary – to us – dress, and replaces that on stage. From the audience reaction, anyone would have thought such an idea had never been attempted before, whether in Così or anything else. Members of the audience – one of the worst-behaved, alas, I can recall – seemed to find that all utterly hilarious, in well-nigh uncontrollable laughter because some people walked through the stalls of a theatre whilst others were bowing on stage. They need, I think, to get out a little more; perhaps, dare I suggest it, they might acquaint themselves with some less derivative ‘modern’ theatre, in and out of the opera house, if they think there is anything daring in what they saw here.


Anyway, in another ‘borrowing’ from other recent-ish productions, Don Alfonso, who has been on stage all along, and who, for reasons unclear to me, remains in ‘period’ dress, is revealed as director of both ‘old’ and ‘new’ productions. The play’s the thing. It is one way, not a new way, as many seemed to think, to address the perceived ‘problem’ with the work. Our Ferrarese ladies and their nobles play roles in the theatre, in a number of different settings – the public area of an (our) opera house, a Brief Encounter railway station, a somewhat dated cocktail bar, the Garden of Eden, the costume department of the house, etc. – and thus suspend the alleged need for ‘suspension of disbelief’, perhaps the most tiresome operatic cliché of all. 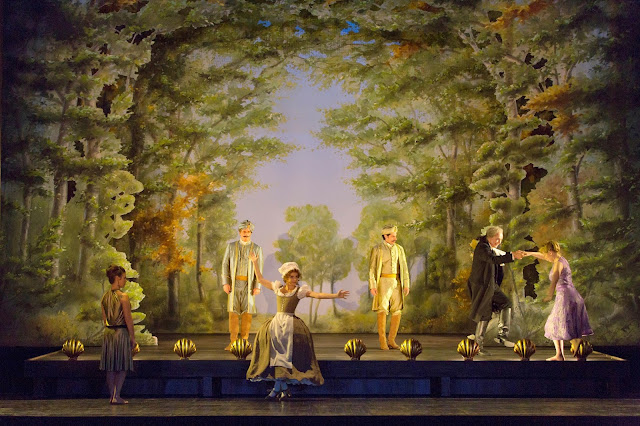 I am far from convinced that the intricacy and overt artificiality of Da Ponte’s and still more Mozart’s work, that very artificiality permitting the most profoundly human predicament to come, unflinchingly to the theatrical fore, need such ‘help’, but that need not have mattered. The problem, to reiterate, is that, especially during the first act, the designs are more or less made to do a good deal of the work that stage direction should be doing. When we come to a potentially fruitful inversion of roles, as in the Garden of Eden, it comes across as hapless, not as transgressive or alienating. It is one thing, often a good thing, to have the audience do some thinking for itself – not much chance here, given the loud applause from far too many in the middle of Despina’s ‘Una donna a quindici anni’: can they not hear the music has not returned to the tonic? – but not at the expense of doing one’s job as director. Otherwise, we should all simply sit at home with a score and/or recording, and imagine the work for ourselves. (We often do, of course, but that is not really what a visit to the opera house is for.) The final emendation, spelled out in glitzy letters above the stage, to Così fan tutti does no harm, is perhaps welcome, but again would gain in strength with something more than a scenic flourish. 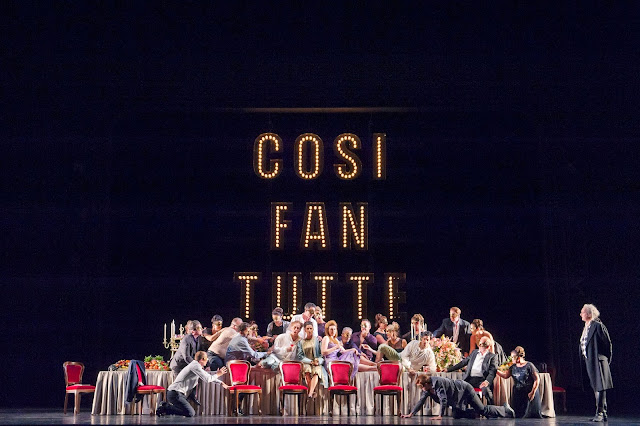 Semyon Bychkov’s reading of this most wondrous of Mozart’s scores grew in stature as the evening progressed. No, it was not Colin Davis, but we have to accept, alas, that he is no longer with us. Bychkov’s conducting offered, at its best, an intriguing alternative, although, in the first half hour or so, some of the tempo variations sounded a little arbitrary and the sensuous quality of the music was occasionally undersold. There were no ‘period’ affectations, though, and as Bychkov hit his stride, the laudable flexibility he had always shown felt more ‘natural’ – however artificial a construct that, like the onstage drama, might be. I heard some people complain of ‘slowness’ and can only presume them to have been ignorant of the varied performance history of the work. Very little was ‘slow’, in any meaningful sense, but it was varied, and deeply considered. The lamentable alternative is to make Mozart sound like Rossini; that is a straitjacket we can all do without.


More of a problem was that the singers did not always, again especially in the first act, sound attuned to Bychkov’s understanding. They sounded as though they would have been happier in the swifter, less contemplative performance, impressive on its own, very different terms, which I had heard last month in Salzburg, conducted by Ottavio Dantone. Indeed, the Guglielmo, Alessio Arduini, offered the common link between the casts. I wrote then of an assumption that was ‘proud, assertive, flawed: just as he should be, whether vocally or in stage manner,’ and much the same might be said here; Arduini is a fine performer, not just a fine singer. Daniel Behle proved an estimable successor to Salzburg’s Mauro Peter, similarly honeyed of tone, ‘Un‘aura amorosa’ as so often a highlight. Corinne Winters mostly impressed as Fioridilgi, the coloratura well despatched, although her lower register was occasionally found wanting. The clarity of Angela Brower’s Dorabella was often married to a subtle richness of tone that was most welcome. Johannes Martin Kränzle took to his role as master of ceremonies with commendable enthusiasm and equally commendable musico-theatrical results. The fussiness of the half-baked concept was not his fault. Sabina Puértolas proved a spirited Despina, attentive to vocal as well as theatrical concerns (which is not always the case). Alas, there remains some way to go before different strands of production and performance come together.