Claus Guth’s staging of Die Frau ohne Schatten, already seen in Milan and in London, now reaches Berlin, the Staatsoper the third of its co-producing partners. Here, I think, its psychoanalytical and, more broadly, dramatic focus is sharper, doubtless the consequence of certain reworking in the light of experience, whether by Guth or his assistants. Narrative clarity is anything but reductionist or lacking in conceptual framework, yet the danger of obscuring Hofmannsthal’s tendency towards the obscure is avoided throughout. We open with a sanatorium dumb show, a woman receiving treatment. In her dreaming, she becomes – or perhaps always has been: it does not really matter – the Empress. Dreaming is not, it should be added, a banal matter of waking up and discovering ‘it was all a dream’, almost as a way of rounding off something that could not otherwise have been rounded off; that was rather the impression gained, at least by me, in London. Here, with some sharpening up of the medical apparatus – a little more presence, perhaps, earlier in the third act would not go amiss – it comes across far more clearly as a mode of treatment. What our heroine – hysterical in more than one way, or perhaps not – undergoes is perhaps what she needs; at any rate, it is what she gets.

Navigation of the boundaries between reality and dream, accepting that sometimes they will remain unclear and that that is no bad thing, gains dynamic impetus through its interaction with Hofmannsthal’s idea of transformation; Ariadne auf Naxos seems to beckon, or perhaps it already has beckoned. The mythological world it continues to receive a relatively full due, echoes, however strained of The Magic Flute, heard (more to the point, seen), without overwhelming. Schmidt’s designs and Olaf Winter’s lighting come into their own here, although I could do without the strangely banal video explication. The shadows cast across the stage say far more than a projection of a pregnant stomach being rubbed. What last time I called ‘the sheer weirdness but also menacing sense of judgement emanating from a courtroom of strange creatures’, close to the end, seems perhaps more menacing in its imagined flights of fantasy than ever. Dreams and their interpretation remain indivisible. ‘Treatment’ is, moreover, not without its perils. Coming hard on the heels of the Freudian themes in Dmitri Tcherniakov’s Parsifal, the staging offers much to ponder.

Zubin Mehta’s conducting of the score was less probing. He knew ‘how it went’, although perhaps lingered a little too much at times when the singers – and the drama – might have preferred otherwise. Compared, however, with Semyon Bychkov’s truly outstanding account at Covent Garden, as fine as anything I know on record, let alone have known in the theatre, Mehta’s reading sounded generalised. Where Strauss’s score offers a myriad of opportunities for harmonic and, still more, colouristic fragmentation and reunion, ever transforming before our ears, this was often a little dogged and, if not monochrome, less kaleidoscopic and, more generally, multivalent, than one might have hoped for. The Staatkapelle Berlin nevertheless sounded excellent, solos well taken without exception, although there were times when I wished Mehta might have allowed it more of its head – and sheer heft. I could not help but recall Daniele Gatti’s shattering 2010 Elektra in Salzburg, as well as Bychkov’s FroSch, and finding something missing.

The cast, though, was first-rate, just as had been the case in London. I am not sure I have heard Burkhard Fritz on better form. The physical demands of the Emperor’s part are fearsome, cruel even by Strauss’s usual tenor standards. One can readily forgive a single wayward passage for the otherwise splendid performance heard here. Camilla Nylund’s Empress could hardly have been bettered. As well acted as it was well sung, as variegated in colour and dynamic contrast as it was clean of line, this was above all a performance that had one sympathise, believe in the ‘case’ before us. I likewise do not think I have heard a better Barak than that of Wolfgang Koch. His way with words and music certainly had me sympathise with the character like never before. The dyer’s predicament was ‘real’, not merely symbolic or dreamed. Iréne Theorin’s imperious yet also deeply felt Dyer’s Wife impressed similarly, its vocal roots in the figure of Isolde but also, one felt, once we knew she had not made the diabolical agreement, in the humanity of Mozart. If Roman Trekel’s Spirit-Messenger were somewhat dry of tone, the instrument of his message, Michaela Schuster, fully lived up to the high expectations elicited by her London performance, its ambiguous malevolence heightened by the Freudian setting. With choruses, adult and children’s alike, on splendid form too, blocked as well as they sang, there was much to celebrate here indeed – even if we cannot include that disturbing pro-natalism from which we shall never quite be able to rescue the work. 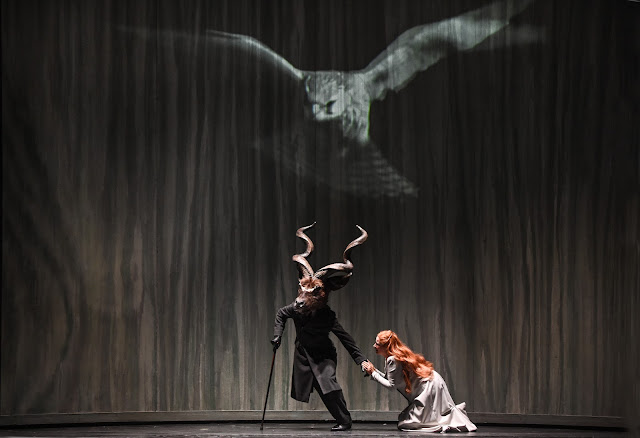