With this, my third visit to Dmitri Tcherniakov’s Parsifal, I have now seen the production as many times as I did that of Stefan Herheim at Bayreuth. I shall spare you the ritual Herheim encomium on this occasion; anyone interested may seek out either my earlier reviews (here, here, and here), or the chapter I have devoted to the staging in my book, After Wagner. Suffice it to say that, developing as it has each year, again like Herheim’s staging, Tcherniakov’s production is now thoroughly established as one of the most thought-provoking, deeply troubling stagings since Herheim’s breathed its last in 2012. (Again, should anyone be interested, I shall have an article in the July issue of The Wagner Journal, looking at both stagings and their relationship to psychoanalysis.) It is just what musical drama should be, and just what clueless reactionaries loathe – because, like all great drama, it points the finger at them. If you want somehow to feel better about yourself, then Parsifal and Wagner are certainly not for you, any more than Sophocles, Shakespeare, or Mozart are. If, however, you want to begin to understand why you should not feel so good about yourself, here you are. 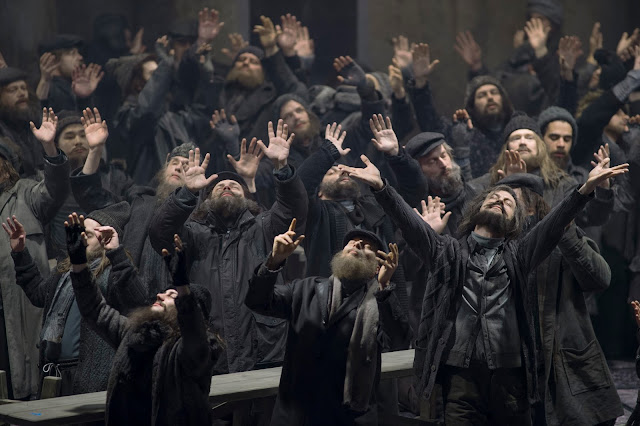 For at the heart of Tcherniakov’s staging, it seems to me, perhaps increasingly so, is the Freudian, indeed Nietzschean insight (not just theirs, by any means) that human existence is founded upon a lie. The first chapter of Beyond Good and Evil opens with the challenge: ‘The will to truth, which misdirects us toward many adventures, that fabled truthfulness, before which all philosophers hitherto have paid obeisance … why not rather untruth? … Who is Oedipus here? Who the Sphinx?’ From such perspectivism (back) to (the birth or death of) tragedy is, in a way, a splendidly anti-Nietzschean journey, especially when it involves the Wagner drama Nietzsche affected above all to hate. Here, nevertheless, it is – and it is perhaps not idle to note here the Russian –Mussorgskian (Khovanschina) and Dostoevskian – ‘look’ to Tcherniakov’s designs and direction for a Monsalvat community of what we might well call Old Believers. (But do they, fundamentally, believe? Why should we take them at their word?) Nihilism needs to be fought against, but how, and how could such battle succeed? Is the only conclusion itself nihilistic? No wonder the world of Dostoevsky seems hinted at – although it is rightly left to us to do much of that thinking; Nietzsche’s perspectivism is incorporated rather than denied (aufgehoben, if you will). 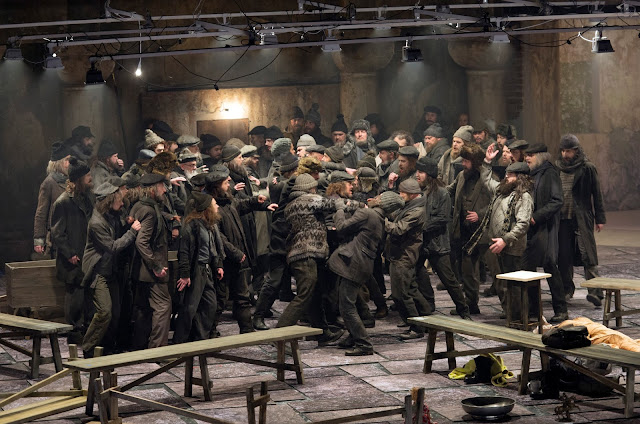 Titurel increasingly seems to me one of the most important keys to the work; he certainly is to the staging. Sung here by Matthias Hölle, there is little doubt that he is continuing to run the show. Indeed, as part of the ritual, whatever that ritual may be, he puts himself in his coffin, to emerge again once ‘it’ is over. Amfortas, whilst he can hardly be ignored in any production, seems perhaps still more central to the first and third acts than often he is. The identification with and perversion of traditional images of Christ – tradition is a dangerous, if necessary thing – comes across more strongly than ever on this occasion. He is presented as an object for us to behold, to admire, whether we like it or no; draining of blood for the ritual from his own side harrows, yet we cannot look away. There is, indeed, perhaps greater emphasis on the history of this strange community than in previous years. The slide show in which Gurnemanz educates his charges with images past – recollections, actual or false, of Wagner’s own Siena Cathedral taking pride of place – makes its point especially clearly. Whatever it is that is going on, whatever it is that is taking its inspiration and its justification from this alleged history, is losing its power to convince. Lies do that, although that does not stop us telling them, believing them.

The shock of the second act naturally registered most strongly of all when new in 2015. What we see when the curtain rises seems entirely new, although we come to realise that its actual framework remains from the first act; it has, however, almost literally been whitewashed. Presentation of Klingsor as an almost stereotypical tabloid image of a paedophile – one can almost see the chasing headline ‘MONSTER!’ – replete with repellent comb-over, surrounding himself with Flowermaidens as little girls in flowery dresses (some of them with dolls, performing the same role in miniature) continues to provide a discomfiting way in to the exploration of Parsifal’s sexuality that lies at the very heart of this act. Klingsor’s overt wandering of hands when he sits himself next to Kundry and her revulsion remind us there is nothing voluntary about this alliance, and, more generally, that abuse breeds abuse. So when Kundry makes Parsifal remember (or invent?) his past, the abusive lineage is extended further. (‘Who is Oedipus here? Who the Sphinx?’) The dumb show of recollection in which his mother walks in on his first tentative steps with a girl instils greater trauma than previously: upon Parsifal, visibly shaking for much of what follows (brilliantly acted by Andreas Schager), but also seemingly upon Kundry, whose production from her sinister bag of tricks of a white shirt, bloodied from a wound like that of Amfortas (perhaps it actually is from his wound?) provides a more overt connection with the business of the outer acts than we have previously seen. Parsifal was not the only one to be shaken by what he experienced; I was too. No wonder he drives the spear through Kingsor at the close of that act. The trauma of male adolescent sexuality is perhaps less often treated with in opera than one might expect. Tcherniakov makes a huge step in redressing that imbalance.

Memory plays tricks – as we see on stage. It is therefore perhaps unwise to attempt extended comparisons between different incarnations of staging and performance. Certainly Daniel Barenboim’s conducting and the playing of the Staatskapelle Berlin would have little to fear from such comparisons. Suffice it to say that this great orchestra’s immersion in Wagner’s music continues to reward. Here, it was the darkness of sound at the darkest of Wagner’s moments that perhaps made the greatest impression upon me, the prelude to the third act a case in point, still more so the continued development of its material throughout the act. Lower strings told one so much of what one needed to know, even if one were somehow managing to ignore, or to misunderstand, what was going on onstage. Barenboim’s ideal combination of structural command and dynamic impetus underlay everything we heard. Revealing encounters between stage action and pit action (Wagner’s fabled orchestral Greek Chorus) were many; that between the rotational cycles (see Warren Darcy’s chapter, ‘“Die Zeit ist da”: Rotational Form and Hexatonic Magic in Act 2, Scene 1, in William Kinderman and Katherine Syer (ed.), A Companion to Wagner’s ‘Parsifal’) and Klingsor’s creepy, childish self-rotation centre-stage is but one instance. The stage listens to the pit, and vice versa.

So too, of course, is that the case when it comes to our cast of singers and outstanding chorus (and extras too). Schager’s portrayal of the title role once again offered a near-ideal sound; he is unquestionably the Heldentenor of our age. His acting skills, as previously mentioned, are almost as crucial, especially his ability to evoke all manner of visual adolescent awkwardness. Anna Larsson’s Kundry offered something intriguingly new when we saw her too caught in the headlights of her own (well, ultimately Klingsor’s) trap in the final quarter of an hour or so of the second act. Otherwise, she sometimes seemed a little less settled, less compelling in the role than her predecessors, although her vocal tone often proved a considerable pleasure in itself. Lauri Vasar’s Amfortas was another new assumption. I found it quite spellbinding: as rich and/or as agonised of tone as need be, in perfect, often complex, relation to what we saw onstage. His way with words was equally impressive. When speaking of richness of tone, one can hardly fail to think of René Pape, whose reprisal of Gurnemanz continued to offer the excellence this production demands (and almost always receives). His almost slow-motion stabbing of Kundry gives the lie to claims that his musico-dramatic gifts are only, or even mostly, vocal. Tómas Tómasson has made this Klingsor his own – and continues to do so: of the outstanding performances to be seen and heard here, his is far from the least. Smaller parts were all well taken, often outstandingly so. This is a Parsifal that will not let go.