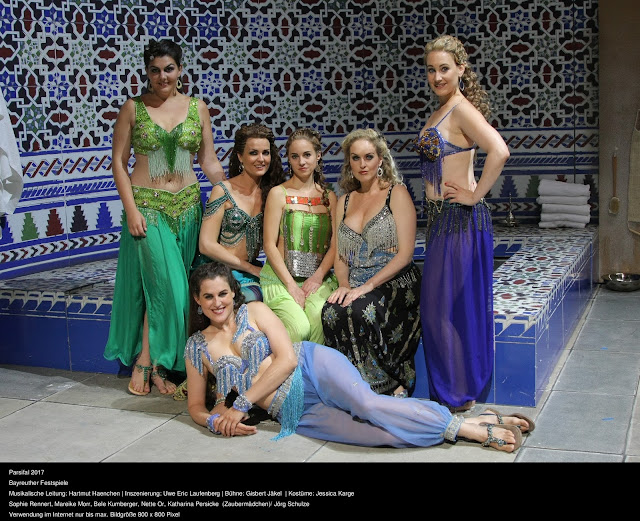 One of the great advantages of the Bayreuth Festival is its Werkstatt principle. Not only do production planning and rehearsal take place in something at least approaching what a festival should be; there is also, crucially, opportunity to revisit, to rethink a staging the following year. Alas, I could see no sign whatsoever of Uwe Eric Laufenberg having done so. That his production of Parsifal is here at all is in itself rather contrary to the principles of the festival. It was brought in, almost off the peg, a production originally intended for Cologne yet never staged there (lucky Cologne!), following the summary dismissal of Jonathan Meese, supposedly over budgetary issues. Who knows what Meese might have come up with? I find it difficult to imagine that it would have been boring, at least, certainly not when compared with this. 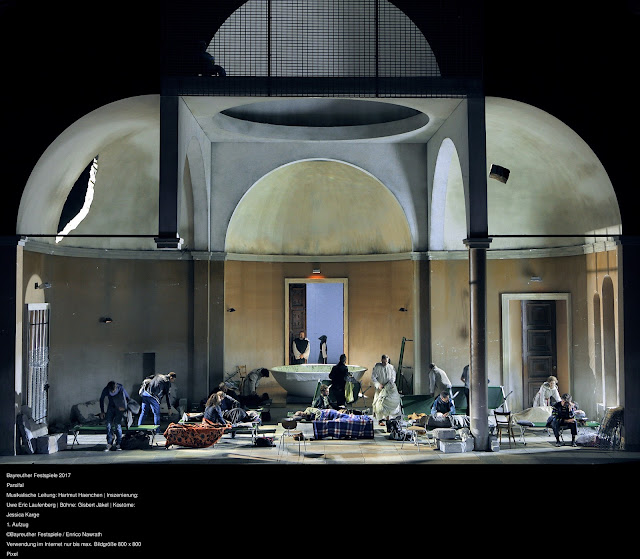 For if the shock value of Laufenberg’s Islamophobia has somewhat dissipated, it has left in its wake still more grinding tedium and banality. The production, should one stay awake, remains offensive, but it is so ill thought through – what on earth was Laufenberg’s dramaturge doing, or why on earth was he not listened to? – that it is difficult to imagine anyone offering more of a gesture to jihad than a shrug of the shoulders and a series of mighty yawns. Were it not a dereliction of duty that might, at a pinch, court comparison with the production itself, I should be tempted merely to cut and paste what I said last year and then add something about the performances. As it is, I hope I shall be forgiving by quoting myself here, before moving on to attempt to say something slightly different: ‘Indeed, this may well be the most boring staging of the work I have seen in the theatre; take away its attempt at contemporary “relevance”, it might as well have been by Wolfgang Wagner or Otto Schenk. Its premise – seemingly contrived by a nightmare team of Richard Dawkins and Stephen Fry, “introducing” George W. Bush as dramaturge – would have been more offensive still, had it been presented with some degree of coherence; one should, I suppose, be grateful for small mercies.’ 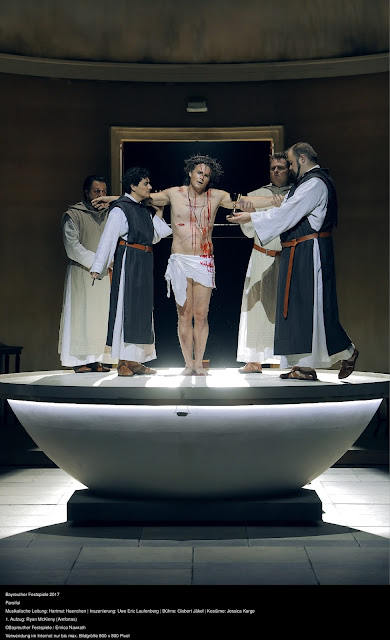 Monsalvat seems to be some sort of Christian community in Iraq, in which some refugees – patronisingly presented as quite without agency themselves – have taken refuge, pursued, or worse, ‘protected’ by Western soldiers. Good for the community, one might say, even if one did not hold with its beliefs. Indeed one might, but Laufenberg is made of sterner stuff. These people are cretins, who deserve only to be mocked, even pilloried. (Perhaps they like Wagner too, or would, given half a chance! Who knows? They might even have taken the trouble to read his writings on religion. Losers!) Why? Because – drum roll – they are ‘religious’. I use the word deliberately, since it is not a word anyone with any real interest in religion, let alone theology, would be likely to use in such a context. It is the bastard offspring of ‘superstitious’ to a third-rate philosophe. And so, in a reframing of the ritual at the end of the act, which might be interesting if it laid claim to anything other than the merely arbitrary, Amfortas is himself crucified and these ghastly, non-liberal people drink his blood. Christians, eh? Presumably Amfortas’s weird nappy is intended to convey quite how infantile this savagery is. Not the sort of thing our dinner-party crowd would do. You mean these people are not centrists? Golly: how outré! Well, we were quite right to invade, then, as Tony said… As for the misunderstanding – a schoolboy would have made a far better stab at it – of Kant and Schopenhauer, as in ‘Zum Raum wird hier die Zeit’: the first Transformation Music glories in a filmic zooming out from Mesopotamia to outer space. It would almost be funny, except again, it is merely tedious – and mind-numbingly stupid. 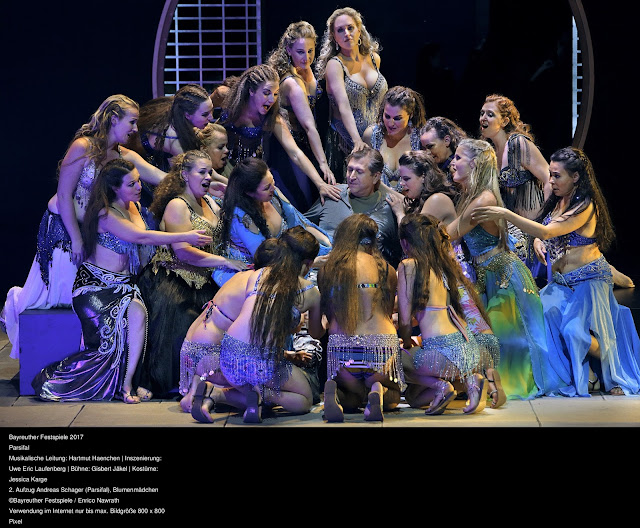 We then shift to the real enemy in the second act. Let us follow in the footsteps of Danish cartoonists and rail at a ridiculous caricature of Islam. It is a ‘religion’, after all, and probably even worse than Christianity. Indeed, definitely worse: there may be no women at Monsalvat, save, perhaps, for the odd refugee, but have you seen these poor Muslim women? Burkini types, no doubt. And indeed, the Flowermaidens, initially dressed ‘modestly’, can reveal their true selves, when, liberated by Parsifal as Western soldier, they reinvent themselves as ‘exotic’ belly dancers. Now our Western hero is interested: what sort of self-respecting woman would not want to display herself to the first passing colonial soldier? Strange, but at least those silly souls – oops: forgive the quaint theology! – have learned their lesson. When things get a little more heated with Kundry, Klingsor the ‘religious’ hypocrite self-flagellates in front of his collection of crucifixes. Amfortas has joined proceedings to give Kundry what she needs – very briefly: very, very briefly. (Or is it just a crass – sorry: ‘provocative’ – visualisation of her recollections? Who cares?) I had almost forgotten: above Klingsor, above the rest of the ‘action’ for both of the first two acts, sits a weird blue mannequin in blue PVC. He does nothing; maybe he cannot. No explanation is given as to who he is, or why he is there. I fear he might be God, or rather those whom the credulous worship as such. Have they not heard? He is dead! Christopher Hitchens told us so. He wanted to invade Iraq too.

The mannequin disappears at the beginning of the third act. Has something changed? Yes, the West has won. Parsifal returns to Gurnemanz and Kundry, who share a wheelchair, yet seem perfectly capable of walking when it is the other one’s turn. (What, after all, is an opera production without a wheelchair? No suitcase? Now that is brave!) The Flowermaidens can now do what they were itching to do all along: take all their clothes off and take a soft-porn ‘lesbian for straight men’ shower together. Islam is over, thank God (if you will pardon the expression!) So is Christianity – Judaism too. The final scene – the mannequin ‘mysteriously’ returns: perhaps there is a remnant now of ‘belief’ still to be eradicated – shows members of the three ‘faiths’ shed their differences, eradicate the barbaric ritual, and just get on together after all. Imagine: there are still some diehards who think the invasion of Iraq was not a good thing. There are some, even, who still read Aquinas…! And yet, I fear I have made all of that sound far too interesting. In between, for most of the time, are long stretches of nothingness, designs shamelessly ripped off from other stagings, other images. If only I could believe that were a knowing commentary on nihilism. Confronted with a choice between Laufenberg and Parsifal, Nietzsche, I am confident, would have had no hesitation whatsoever in choosing the work he so despised. 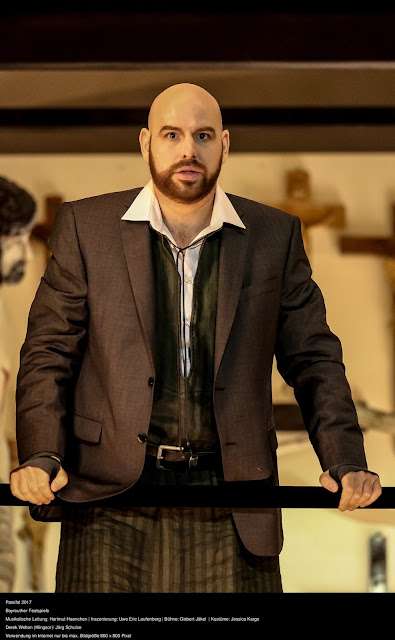 What a waste, then, of such excellent singers. Andreas Schager’s Parsifal is by now, for many of us, a known quantity, but that does not make his true, thoughtful Heldentenor any the less worthy of praise. He did what he could dramatically, but it was impossible not to wish one were seeing him again in Dmitri Tcherniakov’s brilliant Berlin staging. Tirelessly committed, ‘what he could’ remained impressive indeed: in a different league from last year’s Klaus Florian Vogt. ‘What Elena Pankratova could’ was likewise deeply impressive, as alert as she could be to the changing requirements and possibilities of her role. It would be a wonderful thing to hear her Kundry elsewhere, I am sure. Georg Zeppenfeld’s Gurnemanz is deeply considered in its blend of words and music; if only Gurnemanz could have offered some words of wisdom on an anti-theology so out of its depth that it could not even reach Wagner’s shallows. That Zeppenfeld continued to command attention tells us much of what we need to know concerning the quality of his performance. Ryan McKinny gave another fine performance as Amfortas, keenly aware of the transformation of the character – staging aside – between first and third acts. Derek Welton’s Klingsor was one of the best sung I have heard: no mere caricature, deeply musical in its malevolence. The smaller roles were all very well taken, knights and squires in particular far more than near-anonymous ‘extras’. And the choral contribution was truly outstanding. Every word could be heard – an achievement in itself – yet never at the expense of musical values. Translucent and weighty as required, even simultaneously, the Bayreuth Festival Chorus, clearly well prepared by Eberhard Friedrich, did everything that could have been expected of it – indeed more.


Hartmut Haenchen kept the score going, but had little insight to offer. He prides himself, apparently, on being fast, indeed as fast as possible. He probably achieved that, although a quick featureless performance will seem to last far longer than a considered, dramatically fruitful reading. There were times when his speeds reached levels of absurdity, not least since they were not in proportion to other sections. (That is a good part of the secret to good, let alone Wagner, conducting, as the Master’s essay, Über das Dirigieren, ‘On Conducting’, would have made clear. Boulez often lauded it, rightly so.) The orchestra ‘itself’ sounded wonderful; this is, after all, its acoustic par excellence. One could even imagine it, in Debussy’s celebrated phrase, ‘lit from behind’, even if Haenchen seemed more concerned to switch the lights off as quickly as possible, and rarely, if ever, to let the orchestra have its luminous head. To think, such a Kapellmeister-ish despatch stands as an heir (if not quite the immediate successor) to the revelatory performances of Daniele Gatti – or indeed, in a very different mould, to Boulez. And alas, to think: Laufenberg is likewise Bayreuth’s ‘successor’ to Stefan Herheim.