Poor Erik. Most people who have seen and/or heard The Flying Dutchman must have thought that at some point, if only mildly and with a hint of contempt. It is in many ways a thankless role, perhaps not unlike Don Ottavio, albeit with less in the way of vocal beauty. And so, it is an interesting idea to place him at the centre of the action, to turn the drama into his story. The payoff in the third act of Christian Spuck’s production – we do not, thank God, have any intervals – is considerable. I rather wish, though, that what we see there might have been read back more clearly, strongly, or something at least, into the first two acts. Apart from Erik wandering around the stage, often sitting with his head in his hands, or wall hugging (yes, I am afraid so), everything else looks pretty ‘modern-ish-traditional’. Ulrich Niepel’s lighting creates, especially in the first act, plenty of dark atmosphere. Otherwise, Spuck’s production and Rufus Didwiszus’s designs look pretty much as you might have expected them to – at least unless you are of an unfortunately ‘folksy’ persuasion. (In that case, Wagner is probably not for you.) The small model ship we have seen in many other productions is there for Erik to hold. There is rainfall – its noise frankly distracting, and not in a good way, during the Overture; there is plenty of water; there are galoshes; there are nineteenth-century sewing machines; and so on.

Without Erik, then, there really would be no Konzept on which to remark. No problem with that: one strongly delineated idea may well be enough. It is not, though, unless we count his mildly surprising behaviour and his different, slightly more colourful, clothes. Perhaps it has all been his dream; it makes, I suppose, a change from Senta’s dream. His stabbing her at the close is a moment of genuine drama. Then, everything recedes –the image and acts of a repressive crowd familiar from almost every staging, for how could they not be present? – leaving him alone on the stage, as at the beginning. The decision to use Wagner’s later musical thoughts – I tend very much to prefer Dresden – is thrown into interesting relief here; what is the ‘redemption’ we hear but certainly do not see (even on the questionable terms of Senta and the Dutchman)? Is it utter Wahn? Again, I wish we had seen or heard something more of a trail leading up to this, beyond, that is, Erik’s frequent onstage presence. Perhaps the idea had been more strongly, coherently presented when the production received its premiere earlier this year; rehearsal time and repertory direction can sometimes mislead. On the other hand, I can only comment on what I saw. 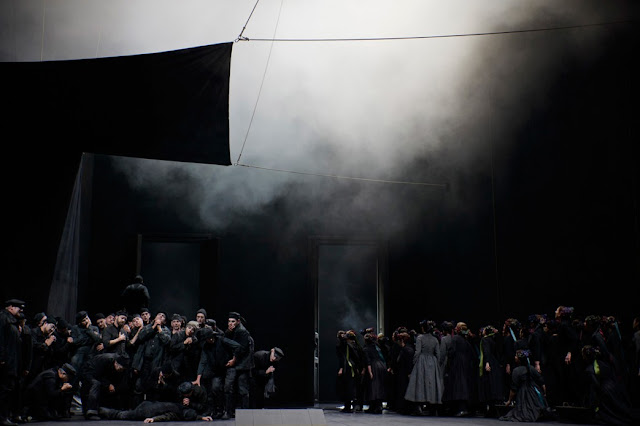 And, of course, on what I heard – which was a perfectly decent repertory night’s performance, with some things very good indeed. Donald Runnicles was generally on secure rather than inspiring form, emphasising the numbers within the score – yes, a perfectly justifiable approach ‘historically’ – rather than its musicodramatic anticipations (and more than anticipations). Bar a strange transition, including one glaring missed entry – these things happen – to the second act, and some slightly lacklustre treading of aural water early in the third, there were solid virtues to be heard. On the other hand, when performing in one single span, and perhaps especially when incorporating the 1860 Tristan-esque revisions, more in the way of overt Fernhören might make for a more fulfilling dramatic experience. (‘Yes, Cosima,’ I hear you reply. Guilty as charged in this, but only this, respect.) It is a very difficult work to bring off, though, with such competing demands; perhaps that ideal performance in my head is simply unrealisable, even if someone else were to agree to my ‘ideal’. Those occasional fluffs notwithstanding, there was much to be enjoyed in the orchestral playing, secure of line, and often impressively dark in tone. Choral singing also impressed, not least the confrontation between the two bands of sailors in the third act, clarity and heft there quite beyond reproach.

Whatever one thinks of placing Erik at the dramatic centre, he will still only have the same amount to sing. In that respect, at least, much will still hang upon the Dutchman. Josef Wagner gave a deeply musical, considered performance. He perhaps occasionally lacked the last ounce of dramatic power, for instance, during his first-act duet with Daland, sounding slightly out-sung at times. That, however, was probably as much a comment on the estimable performance of Andreas Bauer, no mere caricature: flawed yet honourable. Martina Welschenbach’s Senta took a little time to get going vocally, but grew into something impressive indeed. Her obsession with the painting – a dialectical result of Erik’s obsession with her, real or otherwise? – registered strongly from the outset. And in the ‘non-title’ role, Robert Watson sang Erik’s part very well, clearly alert to its competing stylistic demands: a trickier task than many imagine. Gideon Poppe’s Steersman proved a vocal delight, having one wish, as so often, that he had more to do; the same went for Ronnita Miller’s typically likeable, yet not too likeable, Mary. Did this all quite fit into the Konzept? I am not so sure. However, I do not think that was in any sense the fault of a fine cast of singers: something one should never take for granted.