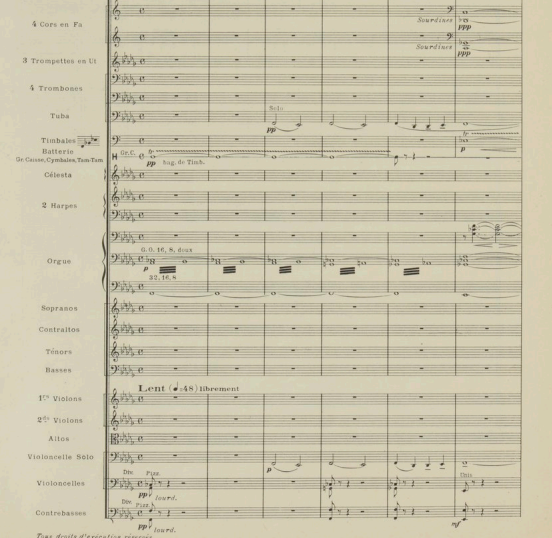 Two French commemorations – anniversaries always seems the wrong word – and surely is – here: the centenary of the deaths of Claude Debussy and Lili Boulanger. Absurd comparisons help no one: it is not in any sense meaningful to compare one of the most important, endlessly rewarding composers of the twentieth or any other century, the creator of music as significant for its course as that of Schoenberg or Stravinsky, with that of a fine, exceptionally promising talent cruelly cut short at the age of twenty-three. This is not a competition. Suffice it to say that Boulanger’s setting of Psalm no.130 needs no apologies from anyone. It stands, never falls, on its own merits.

It certainly received no apologies in this commanding performance from the CBSO, CBSO Chorus, Justina Gringytė, and Ludovic Morlot. They clearly believed in it; so therefore did we. The piece opens – and certainly did in performance – de profundis (or rather ‘du fond de l’abîme’): dark, deep, with an intense sense of drama that pervades, impels its twenty-five minutes or so as a whole. This was a true invocation: ‘je t’invoque, lahvé, Adonaï’.  In melody and harmony it seemed very much haunted by the First World War, during which it was composed (1914-17). Chorus and orchestra alike offered clarity, warmth, and heft too. As will always be the case with such a work, I could not help but think of other music of which it reminded me: occasionally, perhaps ironically, Vaughan Williams (via Ravel?), even some of Szymanowski’s choral writing, although it has none of that composer’s complexity. Debussy too, in St Sebastian mode? And yet it could certainly never be pinned down to influence, nor to ‘voice’. If Ravel at all, it was the Ravel of the Left Hand Piano Concerto – yet that was, of course, still to come: more than a decade later. Spitting, sinful song of the chorus – ‘Si tu prende garde aus péchés…’ – found itself transformed by the rich, dark, almost instrumental mezzo-soprano of Gringytė, duetting with various orchestral soloists (and a tenor from the chorus), and vice versa. This was undoubtedly a personal response to the hallowed text – yet sincerity, as Stravinsky reminded us, is never enough; it may not be necessary. The true mastery of this setting meant that, just as with many ‘bigger names’, the question never arose. Here was an ultimate illumination that was anything but naïve.

Debussy had preceded the psalm, with that foundational work of musical modernity, Prélude à l’après-midi d’un faune. Exquisitely soft and – yes, that inevitable word – languorous, its opening sounded slower than usual – not, however, to its detriment. Morlot caressed Debussy’s lines, had them luxuriate, in a way that is now a little unfashionable. Yet if phrase endings were often held back, this was no mannerism; the method made sense, just as it did when some phrases were lightly pushed, momentum building, the goal justly vague. (This is not Beethoven!) Indeterminacy may not have been born here; at the very least it seemed to have been instantiated. At times, we seemed not so very far from the world of Klangfarbenmelodie. Perhaps.

Nocturnes followed the interval. There was no doubting here that this was the fully mature Debussy. ‘Nuages’ moved – until it held back. Harmonic roots in Pelléas were perhaps unusually apparent. One felt the amorality of Allemonde beneath this sky. ‘Fêtes’ was vivid, vigorous, proceeding with fine precision and drama. There was a wonderful, hushed tension as the trumpets, followed by woodwind, came centre stage. Rhythmic exactitude seemed already to hint at the Ravel work with which the concert would conclude. (We rightly distinguish between these two giants of French music, yet sometimes it is worth asking again what they had in common too – or might do, in performance.) The close sounded unusually dark, as if invaded by forces that impelled it to the abyss (Boulanger’s abîme?) The CBSO Youth Chorus joined for ‘Sirènes’. This was a sirenic seduction that sounded very much in the line of Debussy’s Épigraphes antiques – yet with a far keener sense of harmonic adventure. I was put in mind of Nietzsche, in The Gay Science: ‘at long last our ships may venture out again, venture out to face any danger; all the daring of the lover of knowledge is permitted again; the sea, our sea, lies open again; perhaps there has never yet been such an “open sea”.’ Yes, and what dangers have ensued…

Finally came Ravel’s Boléro. The antipathy to this work bewilders me; or rather, I can understand it at some level without sharing it. Whether intended as such or no, it comes across – at least in so fine a performance as this – as experimental, even polemical: indeed as polemical as anything in Stravinsky. I was especially taken by the way the trombone soloist and then his section as a whole danced. (Now there is a misunderstood concept – as if \ must always entail licence!) Indeed all of the CBSO’s soloists and sections beguiled, in themselves and in combination: held one captive, as sirens might, at aural arm’s length, rendering us unable and unwilling to turn away. It was, moreover, quite the ‘French’ sound one heard from the orchestra as a whole, as it reached that terrible climax. Quite the odyssey!