‘I no longer believe in concerts, in the sweat of conductors and the flying storms of virtuosi’s dandruff, and am only interested in recorded music. That is why I must wait. There are more opportunities in Europe for this kind of activity, but one would have to be there, and unfortunately Europe is no place to make a living. It will come, and in the States.’ As predictions for the future go, Varèse’s words of 1952 to André Jolivet are as hopeless as those of any soothsayer. However, the work with which he would break his compositional silence – at least in terms of music completed – two years later, Déserts, was certainly not lacking in consequences for the future. This fascinating programme from Ensemble Modern and Brad Lubman was not in that sense didactic but suggestive. It would nevertheless have been difficult and not a little perverse not to draw connections when and where they presented themselves. As Musikfest Berlin’s website had it, ‘“De materia”, on music and matter, could be the title of Ensemble Modern’s programme.’ Indeed – and that was in part how I heard it.

‘Deserts,’ Varèse explained, was for him ‘a highly evocative word. It suggests space, solitude, detachment. To me it means not only deserts of sand, sea, mountains and snow, of outer space, of deserted city streets, not only those stripped aspects of nature that suggest bareness and aloofness but also the remote inner space of the mind no telescope can reach, a world of mystery and essential loneliness.’ And yet – is there not always a ‘yet’? – the title was personal, ‘not intended as a description of the music’. For what struck me at the highly dramatic – take that as you will – opening to this performance from Ensemble Modern and Brad Lubman was the sense almost of a portal to another world, of invitation, and then of entry into that world. Wind instruments, all fourteen of them, still spoke of Stravinsky; it could hardly be otherwise, but not in any derivative sense, connection to the past offering degrees of comfort and reinvigoration in equal measure. Doublings of piano and (other) percussion instruments were incisive, suggestive to my ears of later Boulez (sur Incises!), but auguries are strange things, to be distrusted especially when they seduce us. I still have my doubts about the taped sections, but there was an interesting impression of antiphonal response between ensemble and the ‘recorded music’ of which Varèse wrote to Jolivet, a relationship not to be reduced to, but in some sense related to, a parallel relationship between ‘real’ and ‘surreal’, such as would also feature in Olga Neuwirth’s locus…doublure…solus. There was certainly, for me at least, vivid senses of different perspectives, of landscapes real and metaphorical, even, dare I say, of the old idealist dualism of phenomenal and noumenal. Anyone can juxtapose and contrast. With Varèse, though, both in work and performance, there was more: both clearly and subtly. The close brought a feeling of departure from wherever, whenever, we had visited: a final aural glance over the shoulder, then, and it was over.

Neuwirth’s 2001 work for piano and ensemble, as already implied, brought kinship and contrast. Drama and landscape, yes, Stravinskian remnants too, but something harsher too, perhaps, the (proto-)surrealist starting-point (Raymond Roussel’s novel Locus solus) notwithstanding. Titles, as Varèse had already told us, can be dangerous things when they limit rather than liberate our understanding. A fascination with rhythm and a certain hieratic quality revealed themselves, in a landscape that sounded as much urban as garden, but then the novel’s estate is anything but a mere walk in the park. Repetition of various parameters – pitch, rhythm, and timbre in particular – accrued great dramatic power and an unmistakeably modernist sense of wonder, even enchantment. Wandering pitches suggested, as in Varèse, wandering through a decidedly constructed landscape, but was it an earthly city or something beyond? Flânerie, marching invasion, observation, and much else besides seemed suggested: metaphors, not mere depiction, Hermann Kretzschmar’s piano virtuosity a necessary response, even rebellion. Awe-inspiring final climax and resonance brought closure that was in retrospect as surprising as it was undeniable. 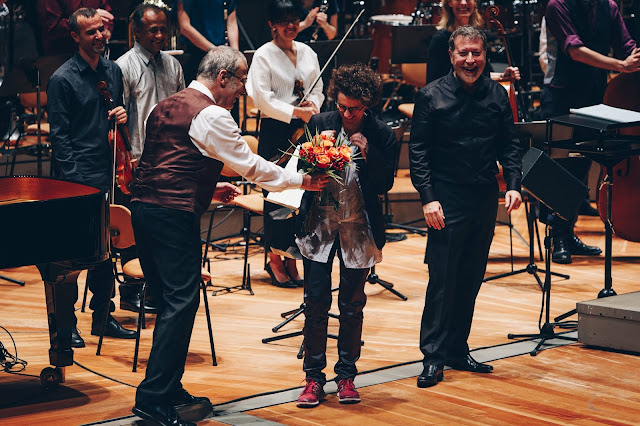 And then for something completely different; or was it? Ultimately, I think it was, yet ‘De Stijl’, the third part of Louis Andriessen’s De Materie, appeared in context as welcome, even necessary, contrast, its directness of line, its pulsating energy very much a response to the intricacies and alternative standpoints of both Varèse and Neuwirth. Having unwisely checked my telephone during the interval, and thus having heard news of what sounded as though it were a wrecking amendment to the bill going through Parliament, yet which transpired to be a typically damp Kinnock squib, I responded with perhaps unusual keenness to the vigour of Andriessen’s response to Mondrian: ‘The perfect straight line is “the” perfect line.’ Stravinsky remained, yet transformed, this time in a guise both aggressive, thrilling, and ultimately humanistic, that puts most other minimalism – if, indeed, this be ‘minimalism’ at all – to shame. Repetition functioned in a very different way from Neuwirth’s, yet no less dramatically. Sheer volume played its part. So too, though, did music theatre, narrator Catherine Milliken and four female voices from Chorwerk Ruhr as powerful and precise as the instrumentalists and Lubman. Once it was over, strangely, I felt very little, perhaps nothing. It had been music for the moment – but that, I think, may well have been the point. For better or worse, my telephone and its unending stream of ‘news’ awaited. The relief, however, could not have been more welcome. 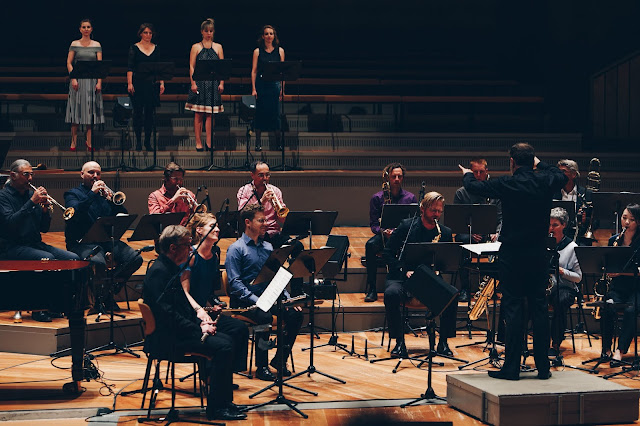