In this concert George Benjamin, the Mahler Chamber Orchestra, and Tamara Stefanovich paid tribute to a number of influences on and/or connections with Benjamin’s music, as well as presenting two new works, which had had their first performances a few days earlier at the Proms. Oliver Knussen, featured both as himself, in The Way to Castle Yonder—as well as in Stefanovich’s solo encore—and as dedicatee of Benjamin’s Concerto for Orchestra would surely have approved of the programming, which also took in Purcell and Stravinsky. I imagine Pierre Boulez, Benjamin’s friend, mentor, and fellow Messiaen pupil, would have done too.

Knussen’s ‘pot-pourri’ from his opera Higglety Pigglety Pop! made for a delightful curtain-raiser, akin to the traditional overture. Exquisite craft was revealed in a performance both detailed and atmospheric, atmosphere revealed to be very much a creature of detail. I seem to recall Benjamin, Knussen’s efforts notwithstanding, to have admitted a lack of affinity with Schoenberg’s twelve-note music. (I may be imagining that; please forgive if so.) Whatever the truth of that, Schoenberg’s serial shadow fell generatively here, as, at least I felt, did the colouristic influence of his op.16 Five Orchestral Pieces. Ravel and Mussorgsky—the bells—seemed present too. The music, in any case, spoke of enchanting danger and, perhaps, parallel dangerous enchantment. A world played and danced before us, before closing in mystery, albeit a different mystery from that with which the piece had begun.

Three Consorts transcribes, as you might expect, three of Purcell’s viol consorts for chamber orchestra. In the first, the Six-Part In Nomine in G minor, strings, gravely beautiful, were gradually joined by other instruments: first a pair of trombones, next a pair of trumpets, then other woodwind and bells (tubular and Korean temple). Restrained and respectful in the best sense, the transcription not only permitted Purcell’s music to unfold as if by itself, but played a crucial part in the set of three considered as a whole. The second, the seventh of Purcell’s Fantazias (previously transcribed by Benjamin for chamber ensemble, unless I am mistaken), earlier scoring sounded as if it had been turned inside out, almost as if we now heard the skeleton on the outside and flesh within. A more overtly modernist glassy sound, when heard, seemed to evoke the world of Benjamin’s opera Written on Skin, or rather take angelic inspiration from there. (The MCO, it may be noted, gave the premiere of that opera.) Other refractions surprised and even reassured. I am not quite sure how Benjamin or the players had a pair of horns sound so Purcellian, yet they did, uncannily so. The third and final movement, the Fantazia Upon One Note, relished and communicated Purcell’s conceit. It was the most ‘colourful’ in the usual orchestral sense of the three too: good-natured, almost (I thought, bizarrely) Christmassy. But that was only the beginning. Things were not quite as they seemed. Bowed percussion and a darker, graver interlude were never quite dispelled by the return to Technicolor. Wonderful!

Angular play with Webern, in particular, was the name of the game—and game it is—in Movements. Process and play were felt almost as if we were hearing a successor work to the second book of Boulez’s Structures, which in a way we are. (It is surely no coincidence that Tamara Stefanovich has performed that music so memorably with Pierre-Laurent Aimard.) Timbre, needless to say, continued to be a preoccupation. Whatever the apparent similarities with Webern, Boulez, or Schoenberg, this could only ever be Stravinsky; a single flute note could—and did—tell us that, as did the particular gravity of a trio of trombones and that ever-strange use of violins. Piano phrasing was in every sense vital, ensuring that serial chess moves—however odd this may sound—sang. So too was a sense of chamber music engagement between soloist and other musicians, in which both Stefanovich and the MCO excelled. What expression there is here in a single gesture. The relation of the five movements to each other was a crucial part of the jigsaw too: there was straightforward rightness to how they fit together. And pitch repetition proved fathomlessly expressive toward the end, connecting intriguingly with Purcell. 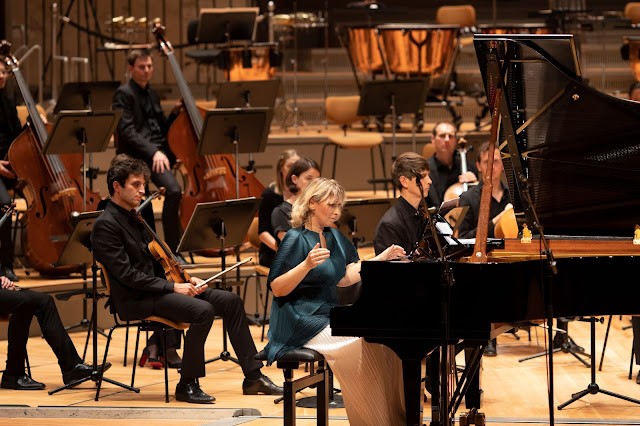 As a generous encore, Stefanovich gave us Knussen’s Prayer Bell Sketch, op.29. If its opening gesture seemed to emerge from what we had just heard, the music went in a very different direction thereafter: more sustained, even Debussyan, not only in attack and reverberation, but also in spacing and even harmony. This was both a gentler and more sensual, yet constantly surprising journey.

Woodwind, soon joined by strings, announced Benjamin’s Concerto for Orchestra. The darkness of this opening had me almost tempted to think this a ‘Covid work’, though the dates of composition, 2019-21, suggest an earlier conception. Perhaps Bartók’s work of the same name offered something of a precedent in that regard, though the path it takes is quite different. Benjamin honoured precedent in permitting members of the orchestra, both as soloists and in (Bartókian) pairs, their moments in the limelight, but that felt entirely natural, never merely for the sake of the genre. Were there shards of Knussen too? Was that even a figure from, or at least with kinship to Stravinsky’s Dumbarton Oaks? Almost certainly not, but there were perhaps connections with Stravinsky worth exploring on another occasion. More to the point than any alleged influence, viral or musical, this was a work extending the emotional soundworld of Benjamin’s third opera, Lessons in Love and Violence. A good deal of anguished tutti writing, by the standards both of composer and genre, led to a closing sense of magical stitching that perhaps did pay tribute to Knussen after all. Whatever the case of that may be, Benjamin ensured a fully satisfying sense of wholeness was cast in retrospect on the work even on a first hearing.

Benjamin’s performance of Stravinsky’s Pulcinella Suite was puzzling: at first quite disconcerting, and not only because it took ears some time to adjust, but ultimately provocative and even revealing. The first two movements seemed to lack bite but that appeared to be strategy rather than failure, especially in the ‘Serenata’ where Stravinsky’s extraordinary orchestration (perhaps in the light of Benjamin’s reworking of Purcell) sounded stranger than ever. It was not so much a matter of Benjamin remoulding Stravinsky in his own image as offering a composer’s insight as conductor such as one rarely hears. (Again, both Knussen and Boulez sprang to mind.) Likewise the ‘Scherzino’ seemed reheard through late Stravinsky, perhaps Knussen too. For there was certainly rhythmic bite where Benjamin decided there should be, aggressively so in the ‘Tarantella’, almost to the exclusion of anything else. The second half of the suite seemed to react necessarily as well as charmingly to that high watermark. Again, the sheer strangeness of Stravinsky’s—and the orchestra’s—colours confounded in the ‘Gavotta con due variazioni’. Flute (Chiara Tonelli) and bassoons (Guilhaume Santana and Pierre Gomes) were very much cases in point in the second variation. Benjamin’s ear for timbre communicated a vision for the first part of the final movement darker and, I think, slower than I can recall hearing before. That made final release all the more joyous and necessary.