How wonderful at last to return to opera at the Royal Academy of Music. (I caught an excellent concert of chamber music by Bartók and Eötvös from musicians coached by Tamara Stefanovich earlier this term.) Many of London’s best opera performances come from our conservatoires, young, enthusiastic musicians aided to act as a company, with none of the grind of repertoire routine, the ‘star system’, or worst of all, agent-determined casting that can blight bigger stages. The smaller size of theatres helps too. To see characters’ faces, especially in a fast-moving, highly reactive ensemble piece such as Puccini’s Gianni Schicchi, is worth a great deal. 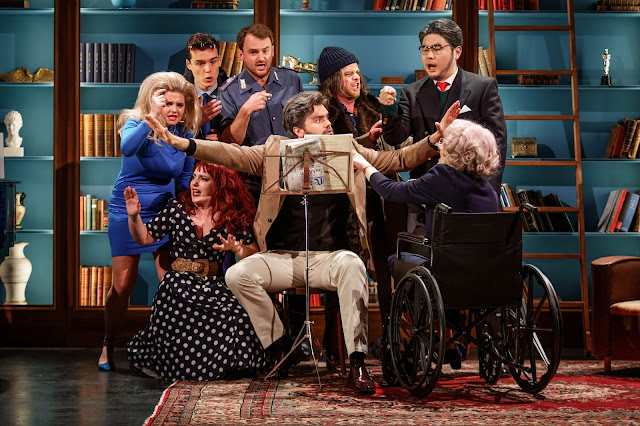 It is a work that tends to bring out the best in its performers—and certainly did here. Stephen Barlow directed a staging set roughly halfway between the time of composition and the present day. I do not think I have ever seen a production set in 1299, and cannot say I have any particular desire to do so. An abiding idea of Florence will always loom large, though, and so it did here: in this case, tinged with music. Composer Buoso Donati’s grand piano helped fill the stage, a drunken Betto (Daniel Vening) occasionally hammering out a tune on it. Monuments to past greatness, or at least renown, included a Maggio Musicale poster for one of Donati’s operas. A large instrument case inherited from the set for L’Heure espagnole, provided a place to hide the body where necessary. But the crucial action lay, as it were, in the interaction, clearly well planned and rehearsed both by Barlow and conductor Alice Farnham. Yannis Thavoris’s costumes contributed to the framework for delineation of character: Bernadette Johns’s Zita every inch the wheelchair-ridden (malingering?) battleaxe with airs, Will Pate’s Marco and Luiza Willert’s La Ciesca a uniformed policeman and ambitious, voluptuous wife, and so on. Patrick Keefe’s Schicchi necessarily took centre-stage once present, and figuratively once announced. His was a fine, detailed performance, as were those of his daughter Lauretta (Kathleen Nic Dhiarmada, with a lovely, snapshot-like ‘O mio babbino caro’) and her eager lover Rinuccio (Ryan Vaughan Davies). But there is little point in merely repeating the cast list. All contributed to the greater whole, as did incisive orchestral playing and conducting. Puccini’s score glistened as it should and must; the opera’s wit duly scintillated. 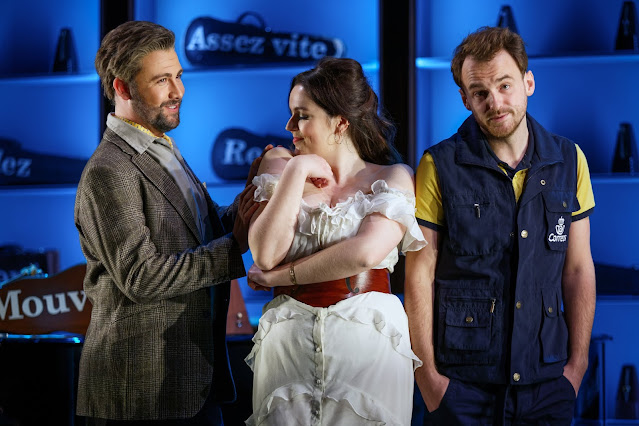 Ravel’s L’Heure espagnole had taken place in a musical instrument repair shop El Tempo, time more overtly met music in the guise of instrument cases with time signatures and tempo markings: ‘4/4’, ‘Assez vite’, and so on. The largest functioned as clock cases to be hiked up- and downstairs by Ramiro. Again set, costumes, and lighting (Jake Wilshire) made a considerable contribution to the overall mise-en-scène. What I missed somewhat, even at the time, though still more so in retrospect, was a sense of musical urgency and utmost precision, the latter surely a sine qua non for all Ravel performance. Farnham was supportive to her singers—and that, of course, may well have been to the point—but there were times when tempi dragged a little. The small orchestra (strings 4.4.3.2.2) seemed less at home in Ravel too, sonorities and balances somewhat variable. That cavil notwithstanding, Johns offered a lively, seductive Concepión, Pate properly under her spell, growing in (the character’s) masculine confidence. So too were the other male singers, Vaughan Davies a nicely fussy Torquemada, Liam Bonthrone and Michael Ronan properly preening suitors in their different ways. Much to enjoy, then, in both cases.