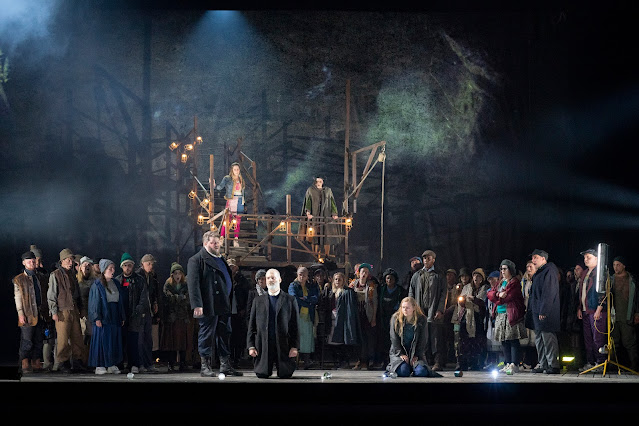 I so much wanted to like this. Ethel Smyth was an interesting, admirable woman. What little of her other music I have heard I have always found at least to be of interest. Her opera The Wreckers is, moreover, an ambitious work, a great statement of intent, matched in many ways by Glyndebourne’s ambition and intent in staging it and by the commitment of those involved on stage and in the pit. None of that, alas, can disguise a signal dramatic failure, whose tedium was surely increased by the frankly bizarre decision to reinstate cuts made for its 1906 premiere. Sometimes cuts can actually make a work seem longer. (Think of Tristan; or rather do not, for the comparison is anything but forgiving.)

Henry Brewster's French libretto is a serious problem: not so much the language as such, though it is no literary masterpiece, as a broken-backed plot, which on paper looks interesting, even suggestive of a Cornish precursor to Peter Grimes. A multitude of incident and apparent conflict notwithstanding, though, it fails to convince. This is partly, I think, on account of so many trees of incident obscuring the dramatic wood. Here lies neither direction nor directness. One loses track—maybe just I did—of who is who, receives little musical help, and finds it difficult to care. Presentation of a host of unpleasant people in the service of a still more unpleasant occupation fails not only to engage, or even to ring true.  There is a message somewhere, but it struggles to emerge.

Smyth’s music is more immediately impressive: at its most structurally convincing when it comes to the choral writing, of which there is much. Even there, beyond being loud and accomplished, it remains anonymous, returning one to the questions of where the drama lies and why one should care. The rest, however, goes beyond mere eclecticism to a banquet of the derivative, all courses served more or less at once, resolving into a strange, indigestible purée of notes. Tchaikovsky, Brahms, Grieg, Wagner, Mendelssohn, Elgar, Bizet, Massenet; and so it goes on, and on, and on… Lack of a definable voice is one thing; so too is a lack of originality; this score, however, seems never to know where to turn, quite to lack harmonic and often even melodic direction. The third of three acts is probably the most interesting, perhaps not coincidentally the least backward-looking of the three. Maybe this was apprentice work, from which Smyth in other circumstances would have emerged more fully equipped; maybe a revision beyond cuts and greater theatrical experience would have produced something more convincing.

Perhaps some would have held Robin Ticciati’s conducting responsible; it is difficult to say confronted by an entirely unfamiliar work. My sense, though, was of committed musical direction that was determined to mould the score into something more cohesive, failing through not fault of its own. The LPO sounded possessed with belief, rather like the community of which we heard the words tell, yet never felt for ourselves. So too did the Glyndebourne Chorus, outstanding in every respect. I cannot imagine a better case being made for what is probably the oratorio-heart of Smyth’s writing. Heft, precision, and clarity were impeccable, as were these singers’ acting skills. The vocal cast was largely impressive too, Lauren Fagen and Karis Tucker shining throughout, but especially towards the close, in the two principal female roles, Rodrigo Porras Garulo ardent as Marc, a romantic hero in whom one would have liked to believe.

The conservatism of Melly Still’s production cannot have helped. I wonder what a director such as Katie Mitchell might have made of material that surely needed to be brought more out of itself, framed, interrogated, were it to have any hope of succeeding. As it is, the staging, half-heartedly ‘modern dress’—as people might have said half a century ago—shows little sign even of drawing basic distinctions between different standpoints. For something in one way so straightforward, it is paradoxically obscure and confusing. Female dancers in Edwardian dress, presumably in some sense signifying the composer, come and go; whatever it is their presence is supposed to contribute passed me by entirely. In a way, this mirrors the work, albeit with less octane and conviction: throw everything in, a shopping trolley included, and see what emerges. It is barely an æsthetic, though, let alone an enlightening one. The only respect in which Still really scores—this should certainly be acknowledged—is in detailed direction of the individuals who came together to make the chorus.

So there you have it. Musical performances made as powerful a case as is likely to be made for the opera. The greater part of the first-night audience loved what it heard, roaring approval in no uncertain terms. A few more sober souls were simply relieved that it was over. I do not begrudge The Wreckers being afforded this opportunity; how else might we reach any sort of informed judgement? By the same token, I cannot imagine ever wanting to hear it again.