When Lydia Steier first presented her Salzburg Magic Flute in 2018, the world was, as they say, a very different place. The trials of the intervening years have left their mark on this wholesale revision. So, I think, has more general experience. Perhaps it is also a matter of my being more receptive; it is always difficult to know about oneself. (These are all, by the way, surely themes of the opera, as well as of this production and its way into the world.) At any rate, where I was far from convinced by its earlier, circus incarnation—not on principle, Achim Freyer’s enchanting, classic production remaining one of my favourites—I found myself intrigued and involved by many aspects of this Neueinstudierung.

It takes place in an upper-class household shortly before the outbreak of the Great War. Parallels, sadly, speak all too well for themselves here. Following an argument over dinner—staged as an overture pantomime—the three boys are sent to their room, and their grandfather reads them a story, his narration largely though not entirely replacing Schikaneder’s dialogue. (It is a pity, but Steier in the programme makes a good case that, given the realities of theatre and rehearsal, even at a Festival such as this, despatch of the dialogue by an international cast will often leave a good deal to be desired.) A fairytale unfolds, in words (by Steier and dramaturge Ina Karr, paying homage to venerable collections such as those of the Brothers Grimm), the imagination of grandfather and boys alike, and thus also in gesture and music. Members of the household—family, servants, and visitors—furnish the cast of the Singspiel. Tragedy from the grandfather’s past informs the action, when, in a magical feat fully worthy of the opera, his late wife, who took her own life, steps out of the painting on the wall. Will Tamino and Pamina fare better? Perhaps that hope, that intent, informs the story the captivating Roland Koch continues to tell. 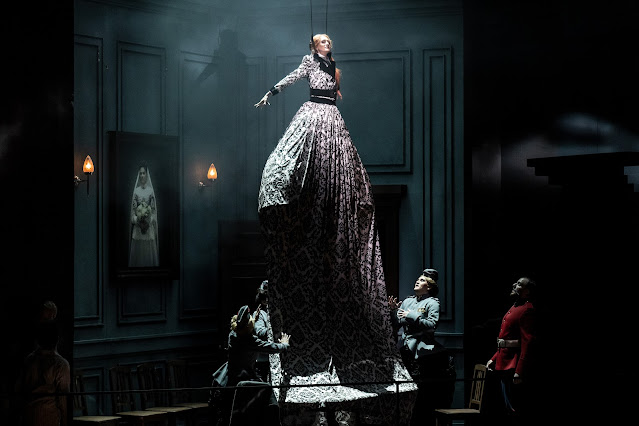 Steier captures well many of the work's ambiguities, rightly saying (in a programme interview) that ‘there is no black or white in this opera, only grey’. Or rather a multitude of colours, but perhaps that amounts to the same thing ethically. In the second act, it becomes clear that a male-dominated society, Sarastro’s, will lead the boys—and the world—to war. There is a degree of excitement to that for the boys, of course, but we, quite rightly, fear. The sermonising of Sarastro and his order should not be taken at face value. Perhaps ‘wisdom’ is not always what it seems, and Papageno (the butcher’s boy) might have a better idea. Pamina’s boldness, quite different from that of the mute, veiled women we see elsewhere, permits her entry. But perhaps there was no right path after all; that will most likely be a story for another day. 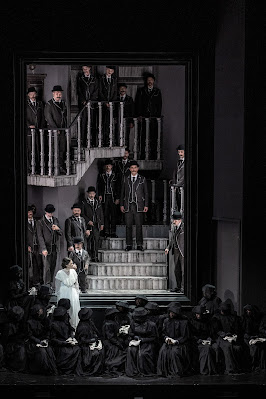 Joana Mallwitz’s conducting was to my ears considerably more successful than that of her 1998 predecessor (Constantinos Carydis). It is fresh, almost modest, certainly worlds away from a Klemperer or a Böhm (or a Colin Davis, for that matter). But the production teaches us to beware male authority figures. In any case, this is clearly how Mallwitz hears the music; she and the Vienna Philharmonic communicate well its inner life, its sheer variety and, ultimately, many aspects of its miraculous unity.

Tareq Nazmi’s Sarastro was in something of a similar vein: less stolid than sometimes one hears, though with enough pomposity to fit role and production. Brenda Rae’s Queen of the Night startled in offering much more than mere set pieces; within the confines of the role, she hinted at greater humanity, more of a back story, and she acted as well as sang. An indisposed Mauro Peter’s last replacement, David Fischer—Peter continuing to act the role onstage—impressed greatly as Tamino. He would have done regardless of the circumstances. Ardent, sweet-toned, and well able to shape a clean yet infinitely touching line, Fischer offered Mozart singing of the first rank. Regula Mühlemann’s Pamina, possessed of clear inner resolve, likewise touched the heart-strings, not least in a well-judged ‘Ach, ich fühl’s, which resisted the unaccountable fashion of taking it as fast as possible. Michael Nagl’s lively Papageno chose to look on the brighter side of life, but hinted, sometimes more than that, at a broader emotional hinterland too. The chorus, unseen (Covid-safe, perhaps), impressed throughout. 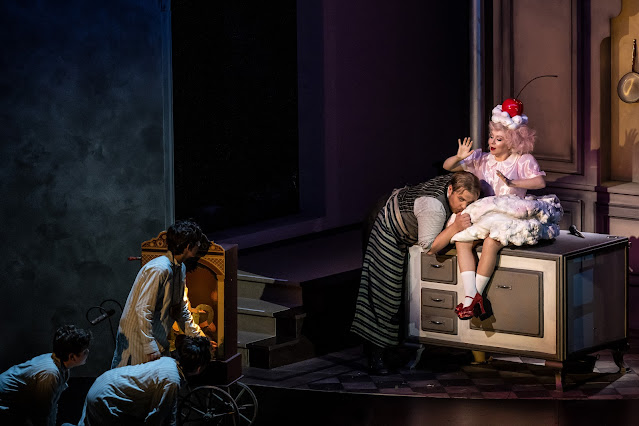 Special mention, though, should go to the three members of the Vienna Boys’ Choir, Stanislas Koromyslov, Yvo Otelli, and Raphael Andreas Chiang: on stage pretty much the whole time, now with important speaking and acting roles, in addition to their singing, all of which was accomplished with convincing, indeed outstanding results. Maybe there is, after all, hope for a European future, whether in musical terms or beyond.