Tim Albery’s production of The Flying Dutchman, first seen in 2009, now returns to the Royal Opera for a run of six performances, of which this was the first. It remains a wasted opportunity on stage, but irritated me less than last time. (Since the production team did not appear on stage, I assume that it was entrusted to a house revival director: ironically, then, it comes across better than it did before.) In musical terms, the performance proved preferable too, if nevertheless mixed in quality.

As so often, much depends on where one is seated. Last time, from the Balcony, I found the ‘sole virtue’ of the production to have been during the Overture, ‘with a surprisingly effective suggestion of wind and rain upon a makeshift stage curtain’. From the Stalls, however, David Finn’s lighting proved a little too strong, almost blinding at times, whilst the continued suggestion of the sea and its ebb and flow elicited mild nausea. Perhaps the impression of sea-sickness were intended; if so, it should not have been. Albery’s stance that a vaguely modern, working-class community is somehow equivalent to, or an appropriate replacement for, an earlier ‘straightforward’ life by the sea remains to my mind both wrongheaded and patronising. Yet the attempt at social ‘realism’, most clearly incarnated in the factory girls who change their clothes for a tarts’ night out, seems toned down in the revival, a welcome development, permitting a little more emphasis upon the ‘ghost story’ element to the drama. It remains a problem that the Dutchman seems to hold so little interest for the director. His plight not only loses its metaphysics; it barely seems to exist. The same, needless to say, holds for redemption – or lack thereof. Senta is again mostly left to her own devices, seeming less hysterical than just a little peculiar. Her toy ship remains an inadequate substitute for the picture, making nonsense of the Ballad, yet without real suggestion of reinterpretation. 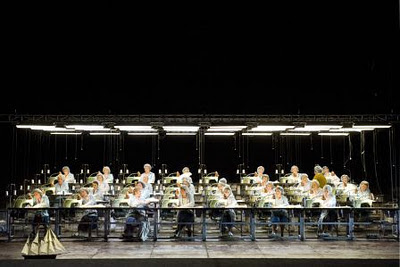 It is a good thing, then, that the Dutchman and Senta were both strongly cast. Last time, Bryn Terfel, who will always be lauded by his legion of uncritical fans, was disappointing in the extreme, unsupported by the staging and veering between bark and crooned whisper. The Latvian bass-baritone Egils Silins proved superior in every respect. One heard every word – as, to be fair, one did with Terfel – but now the words meant something, both in themselves and in proper Wagnerian musico-dramatic alchemy with the notes. Vocal tone was just right, properly suggestive of Wotan: indeed, there were a couple of occasions when I was put in mind of the desperate, tortured Walküre monologue. (It is heartening to see that Paris has signed Silins for its complete Ring in 2013.) Anja Kampe assumed the role in 2009 too; on both occasions she impressed both in terms of textual response and stamina, though the production does her no favours whatsoever. Endrik Wottrich showed some strain, most glaringly at one point during the third act, but this was a much stronger performance than his recent Royal Opera Florestan. There is clearly a Siegmund-type voice locked within; the pity is that the voice production is often constricted. Still, he looked and often sounded handsome, no mere cipher, as is so often the case. Stephen Milling proved impressively attentive to words and text as Daland, as did John Tessier as the Steersman: his song emerged as a true Lied, moving in itself and not simply a plot device. Clare Shearer’s Mary, reprised from 2009, is hampered by the production’s frumpy portrayal, but again made little impression vocally either. 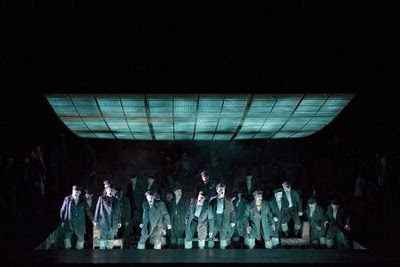 The Royal Opera Chorus and Extra Chorus certainly did make a powerful vocal impression, testimony to fine training from Renato Balsadonna. Weight and line are equally present, and the chorus members do what they can with the staging. The orchestra was just as impressive. Germanic in heft and hue, it once again showed that , on a good night, this is a group of musicians to compare with any. Jeffrey Tate’s conducting, however, proved more of a mixed bag. On at least nine-and-a-half times out of ten, one can discern the progress of a musical performance from its opening bars; this proved an exception. Whilst they were very much on the driven side, the second subject was drawn out and lifeless, setting the pattern for much of the first and second acts. The Spinning Chorus and Senta’s Ballad pretty much ground to a halt. There was also major discrepancy at the beginning of the chorus not only between pit and stage but within the pit (cellos and woodwind). Yet the end of the second act and the third act sounded reinvigorated: more incisive, without being rushed. I suspect that the rest might come more sharply into focus throughout the run of performances: the orchestral sound is certainly there already.
Posted by Mark Berry at 12:29 pm