(sung in English, as The Marriage of Figaro)


Mozart remains not only the most difficult composer to perform, but also, it would seem, the most difficult to stage. Whether at the Coliseum, Covent Garden, or anywhere else, the number of failed productions should be enough to warn off all but the most experienced of opera directors. Don Giovanni is perhaps the most notorious graveyard of all, but Figaro seems to come close. Whatever her undeniable strengths as an actress, Fiona Shaw seems quite at sea here, though accounts from the Stalls – I was in the Dress Circle – had her laughing uproariously at her own jokes.

A trait shared with many productions is absurdly ‘busy’ behaviour, as if one were unable to hear the life in Mozart’s music without scenic underlining that will always fall short. Much of this activity hails from a wearisome, near-inevitable additional cast of extras. Whilst not so bad as Katie Mitchell’s Idomeneo, where extra-itis reached epidemic proportions, it remains quite unnecessary: the money would surely have been better spent upon providing more strings for an underpowered, pastel-sounding orchestra. One has to wait quite some time before the music – remember Mozart? – is permitted to begin, since characters must try to find a buzzing insect inside a harpsichord. (Yes, I wish I were making this up…) To add insult to injury, the blind man who ‘introduces’ the first act turns out to be Basilio. Apparently, it is intrinsically amusing for someone to be blind, an assumption some, one would hope many, might find offensive. At least it makes a change from another bizarre recent trend, which insists upon turning this stock buffo character into a camp monstrosity that might have had the makers of Are You Being Served? think twice, Barrie Kosky’s Berlin production in that respect as much else the ne plus ultra.

Barbarina’s coarse behaviour suggests that she is more of a drunk than Antonio; I have no idea why. The Count wanders around his garden without his trousers on and attempts to bugger the Countess (whom he thinks is Susanna, of course), though Figaro – intriguingly – emerges a far more central figure in the fourth act than is often the case. Thank goodness for that, since many others are behaving as if they were teenagers out on a (mild) Saturday night rampage. 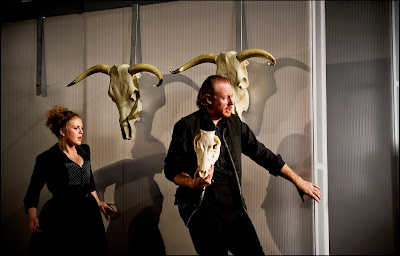 Peter McKintosh’s designs bewilder. Doubtless some ‘post-modernist’ point is being attempted in having a mix of eighteenth-century dress and vaguely contemporary clothing. It merely ends up looking a mess. The revolving set permits scene-changing, but tends to tempt the production to unnecessary examples thereof. Why, for instance, does the second act suddenly shift to what appears to be a kitchen, rendering nonsensical talk of jumping from the Countess’s window? If the impression of a maze is intended to portray the Count as Minotaur – there are skulls and carcasses all over the place too – then it is difficult to understand why. Perhaps I am being unimaginatively literal about this, but I am unaware that he wishes to kill anybody. Tedious film images portray nothing in particular from time to time, whilst we apparently need a sound relay of fireworks to delay the beginning of the fourth act, since none of us would know what they sounded like otherwise. (If fireworks must be portrayed, a visual impression would have been preferable, and surely would have been better off placed at the end of the act.)

Worst of all, it is difficult to discern any but the most incidental social tension. Da Ponte and Mozart are not Beaumarchais, of course, but this remains a deeply political opera. Here Figaro’s only problem with the Count is that the latter is an unpleasant man unable to keep his hands off anything in a skirt. The French Revolution stands as distant as it does from a wet night in Walthamstow.

If Shaw knows better than Da Ponte, than so does Jeremy Sams, whose ‘versions’ of Mozart operas have become quite a menace. At best, the text is loosely after the plot, weirdly ranging from the occasional correct translation to the language of EastEnders. ‘Where the hell is Marcellina?’ is one unmusical, undignified gem, if I remember correctly. The number of forced rhymes – a few, and I mean a few, members of the audience found them hilarious – is greater than anyone could reasonably be expected to count and I certainly had no intention of trying. Since almost everyone in the audience will know the original, and will be mentally hearing it in opposition to any translation, let alone to this, would it not be more sensible in an age of surtitles to permit Da Ponte to speak for himself? Musically, things are better, though they ought to be better still. Paul Daniel is a puzzling Mozart conductor. There is life to his reading, at least when it does not race ahead unnecessarily, as in what may well be the fastest fandango on record (needless to say, presented scenically by unnecessary ‘additional’ dancers). Moreover, the astounding finale to the second act veered dangerously close to turning into a trivial forerunner of Rossini. (Nikolaus Harnoncourt, hardly a ‘traditionalist’, has warned against that path, yet increasingly few seem willing to heed him, let alone masters such as Erich Kleiber, Karl Böhm, or indeed our own Sir Colin Davis.) Indeed, throughout the performance, the orchestral sound lacked depth, sounding strangely muted. This is symphonic music in many – though not all – respects, yet it did not sound like it. In a large house such as the Coliseum, one needs a large orchestra; it really is as simple as that. On the other hand, Daniel slowed down beautifully for the Count’s plea and the moment of forgiveness: a magical moment, the only other being the transformation in ‘Dove sono’. That is, sadly, two more magical moments than many performances muster.

Mentioning ‘Dove sono’ brings me to the high point of the performance, Elizabeth Llewellyn’s Countess. An extremely short notice replacement for Kate Valentine – whom I had much been looking forward to hearing – she truly excelled, penetrating to the very heart, in every sense, of Mozart’s greatest miracle of characterisation. Despite the busy-ness around her, Llewellyn managed to impart a considerable degree of stillness: just what the director should have ordered. Whilst this Countess had impressed at Opera Holland Park, she progressed still further here, the handicap of translation notwithstanding. Roland Wood offered a masculine Count Almaviva: temper tantrums the director’s fault, not his. However, he shaded too close to mere speech at times. Iain Paterson’s Figaro, splendid of diction, presented undeniable, truly laudable honesty of character, though there were occasions when he sounded a little on the elderly side for the role. His Susanna, Devon Guthrie, likewise seemed – and this was more a matter of acting than vocal quality – more mature than is often the case or indeed desirable. Lucy Schaufer’s Marcellina, less of an old hag than usual, indeed often seeming younger than her soon-to-be daughter-in-law, proved a cut above the rest of the cast.

I wonder, however, whether the real problem is inability to distinguish comedy from the merely comic (akin to the Rossini problem mentioned above). Comedy is more a matter of form than of making one laugh; if it would be downright offensive to find Così fan tutte amusing, it is surely at least unnecessary to do so with Figaro. It is perhaps no coincidence that by far the best production I have seen is no laughing matter at all, Claus Guth’s brilliant Ibsen-, even Strindberg-like inversion. That, rather than a touch of vomiting in the garden, is the sort of infidelity upon which Mozart’s characters and indeed Da Ponte’s libretto can thrive.
Posted by Mark Berry at 7:46 pm