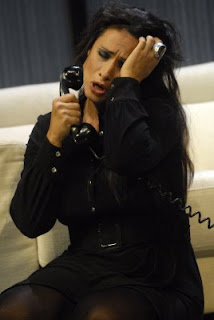 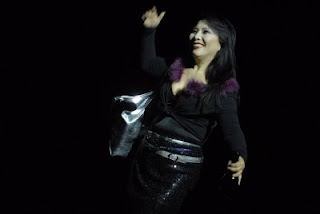 Oper Leipzig is certainly giving Schoenberg his due. One ought to be able to say that about every opera company, every orchestra, every concert hall in the world, but sadly not. Last season we were treated – yes, treated – to a triple-bill of Schoenberg’s three one-act operas. Now we have a staged version of Pierrot Lunaire in a double-bill with Poulenc’s one-act opera, La voix humaine. I should readily wager that these two works have rarely if ever been performed together, Poulenc’s admiration for the Second Viennese School and even for the young Boulez notwithstanding. There is, if the truth be told, little to unite the two works, although as staged here, Pierrot might be said, like La voix humaine, to have a female protagonist. Aside from the strange description of the former work’s reciter as ‘a woman who spends too much time on the telephone’ and a brief re-appearance of the telephone from La voix humaine, in which re-appearance its wire acted as a noose, there was little to unite the productions either. This did not matter; we simply experienced the two works – or perhaps better Poulenc’s work and Peter Konwitschny’s take on Schoenberg’s work – on more or less their own terms.

In Christoph Meyer’s production, first seen at Barcelona’s Gran Teatre del Liceu, the setting for La voix humaine was simple and much as originally envisaged. We saw a woman at home in the aftermath of what we learned had been a suicide attempt; home gave an impression of something credibly Parisian; the telephone was there too. And so, rightly, the emphasis was upon Angelas Blancas, whom Meyer directed with impeccable realism. Unless one were utterly to overturn the premise of the work, I cannot imagine a symbolic production working. Blancas’s movements, expressions, actions: all seemed utterly believable. This, though, would have been as nothing without her singing. When I say that Blancas proved herself a fine singing actress, I do not mean to imply, as can sometimes be the case, that her acting compensated for her singing, simply to say that the two aspects were as one. Her portrayal of a woman’s last, increasingly desperate telephone call to the lover who has jilted her was not only moving but credible as half – or rather more than that – of a several-times interrupted dialogue. Her looks and vocal timbre also made one quite ready to believe that this was a Parisienne: more full-blooded than the work’s creator, Denise Duval, but none the worse for that. After all, La voix humaine has attracted artists as different as Felicity Lott, Elisabeth Soderström, and Jessye Norman. Blancas was quite at home in such august company. She was helped by Josep Vicent’s conducting of the Leipzig Gewandhaus Orchestra. That the length of the significant pauses did not bring attention to itself is a considerable tribute, since these are difficult to judge. Occasionally I wondered whether the contrast between Stravinskian rhythm and sensual sweetness might have been greater but to have underlined this might well have been too great a disruption. The orchestra sounded warm and well-blended, at home in Poulenc’s music without sacrificing its unmistakeably German timbre. This was undoubtedly a fine performance.

So was that of Pierrot lunaire. Peter Konwitschny contributed an interesting if enigmatic note, although I was not at all sure how it related to what we saw on stage. He claimed rightly: ‘this production is not about the work itself.’ However, I did not readily comprehend how it lent the work ‘expression by giving it back its context’. Rather it seemed to me to impart a narrative or at least scenes, which ‘worked’, even if it was difficult to explain why, or how they connected with the music. As if Young-Hee Kim did not have enough to worry about, she was called upon to arrive drunkenly on stage, interact with the conductor and players, show us that she was – as Alan Bennett might say – ‘in a bit of a state’, shoot herself, and eventually perhaps – as Bennett might also say – ‘pull herself together’. For instance, at the end of the ‘Valse de Chopin’, she snatched the baton from Johannes Harneit’s hands, ran around conducting (and continuing to recite), then stabbed pianist, Christian Hornef with the baton and shouted of his death. Hornef had to lie dead on the floor for a little time until rising to continue with the re-entry of the piano at the end of the following number, ‘Madonna’. In principle, I have reservations about such a staged approach, since it most likely restricts the workings of one’s imagination, but it turned out rather well and is after all but one attempt to present this irreducible, irrepressible, irresistible work.

Kim’s performance was undoubtedly that of a singing – and speaking and various things-in-between... – actress. She varied the ever-shifting balance according to the needs of the performance, which is as it should be, and showed herself attentive to the bizarre words, producing so many different sounds in a single line – ‘So modern sentimental geworden! – of ‘Heimweh’. Harneit, sometimes called upon to act too, directed members of the Leipzig Gewandhaus Orchestra with great aplomb. He struck a fine balance – there can surely be no one correct balance – between precision and expression, Romanticism and modernism, decadence and construction. Nightmarish dance rhythms really told.

Most important, Harneit allowed the players room to perform, both as soloists and as members of the ensemble – and of course, with Young-Hee Kim. They also had to speak – reciting the final ‘Rote, fürstliche Rubine’ of the tenth number. Manfred Ludwig switched artfully between flute and piccolo, always ensuring that the latter was an instrument of musical expression, never merely shrill. Hornef displayed a commendable grasp of Schoenberg’s piano style, virtuosic and idiomatic throughout. I was greatly impressed by the combination of shrieking hysteria from both Kim and Volker Hemken’s clarinet in ‘Rote Messe. They cleverly mirrored one another, producing chamber music, not simply effect. As Stravinsky once remarked, Pierrot is – amongst so many other things – an instrumental masterpiece. This was equally apparent in the Romanticism we heard from Daniel Pfister’s ’cello in ‘Serenade’, a performance whose equally audible constructivism also pointed the way forward to the Op.24 Serenade. We had a violinist and a violist, which makes sense, since few players have equal command of both instruments. Julius Bekesch showed himself adept at following – and leading – the ever-shifting moods of this nightmare; a particular highlight was his sweetness of tone in ‘Heimfahrt’, married as always to perfect rhythmical precision. Dorothea Hemken’s rich viola contributed with Hornef’s neo-Brahmsian piano part to the impression in the final ‘O alter Duft’ of a perverted, distorted Lied. It then remained for our heroine (?) to bid us farewell, a modern wayfarer of sorts. I doubt that I shall forget this performance.
Posted by Mark Berry at 6:06 pm