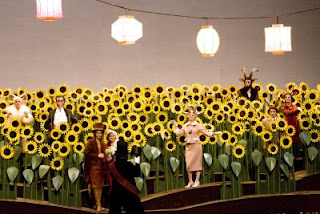 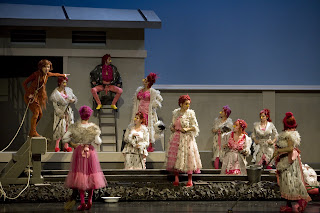 This is, perhaps surprisingly, the Paris Opéra’s first production of The cunning little vixen. But then Janáček’s greatness has not been widely recognised for so long as one might expect. Early performances tended to be the preserve of Czech performers, with a few German exceptions. To take the standard-bearer of later twentieth-century modernism, it is not quite true to say that Pierre Boulez has only come now to the music of Janáček. As early as 1973, he conducted the Lachian Dances in New York. (The concert also featured music by Handel, Mozart, and Copland; recordings can readily mislead as to the breadth or otherwise of an artist’s repertoire.) This nevertheless proved an exception and it is only much later that Janáček has come to feature more regularly, if hardly frequently, in his programmes. A Prom this year marked, I think, the first opportunity – and I shall be pleased to be corrected – for a British audience to experience his Janáček. Moreover, it was only in 1978 that a collected edition was begun. Sir Charles Mackerras has of course proved an indefatigable champion from his Sadler’s Wells days onwards and Bernard Haitink conducted more than one might have expected whilst at Covent Garden. Gérard Mortier has certainly done his bit for the cause whilst at the helm in Paris, as he did in Salzburg too. This production must be accounted another success for his régime as it enters its final year.

The production comes from more or less the same team that brought us the estimable Paris Cardillac. André Engel, Nicky Rieti, and Andre Diot are common to both. This is clearly a team that has a sense of theatre. (What should be a given is far from always so.) It is, moreover, evidently willing to consider its approach according to the work and the circumstances rather than to impose a ‘house style’, irrespective of requirements. (Achim Freyer’s Eugene Onegin, anyone?) I say that, since a sense of theatre apart, the two productions did not have anything startlingly obvious in common. Where Cardillac had been highly stylish, there was something winningly homespun here, to appeal – in that tedious cliché – to children of all ages, but not only to do that. Amidst the apparent wide-eyed naïveté of the bright sets and delightful, anthropomorphic-but-not-too-anthropomorphic animals, serious and apposite points were made concerning the cycle of life and the somewhat fraught relationship between man and the natural world. (In the case of this opera, one might say vice versa too.) We saw the turning of the seasons – and almost felt them, the music helping very much here, of course. And the turning of the seasons, as in Haydn’s oratorio of that name, is also a metaphor for the stages of life, the first intimations of spring at the end moving as they should. The railway line running through each scene was not, as it might sound in abstracto, a merely fashionable device, but visible evidence of the impact of man upon Nature. It was not taken any further than that, turning a delightful work into a self-righteously environmentalist tract, but it nevertheless made us think.

The orchestra of the Opéra national de Paris sounded at least as good as it had for Tristan the previous evening, if anything even better. An especial delight was the vernally fresh woodwind, with the brass boasting an impressive night too. Early on, we heard fanfares that looked forward to the Sinfonietta, whilst the fine quartet of horns in the third act approached perfection. Dennis Russell Davies proved a steady hand at the helm. To start with, I missed a little of the lingering Romanticism that one can often hear in Janáček. However, as the evening progressed, I heard more, not a bad metaphor for the blossoming of the vixen herself. Rhythms, with the very occasional exception, were taut and the structure was admirably clear. Elena Tsallagova showed herself as agile of voice as she was on stage, in the title role. Her rapport with Hannah Esther Minutillo’s Fox was genuinely moving, whatever reservations one might entertain in principle about a couple of foxes falling in love. All of the other parts were taken with gusto; character acting and character singing were quite rightly to the fore. And the multifarious choral and silent movement parts were equally impressive: a tribute to a genuine company achievement.
Posted by Mark Berry at 10:23 pm