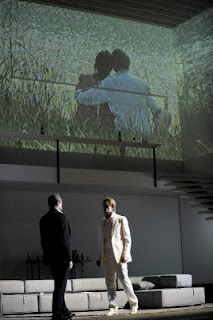 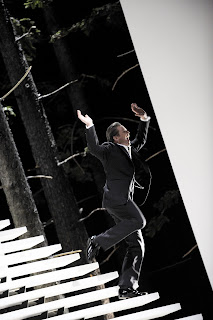 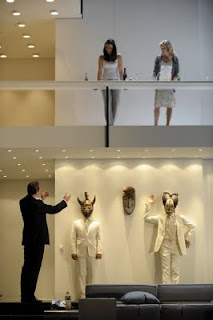 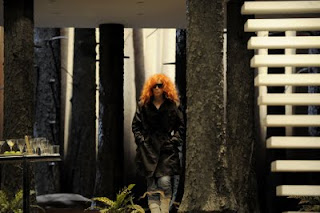 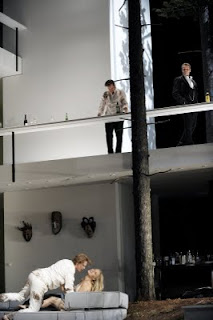 My expectations were extremely high, following Claus Guth’s extraordinary transformation of Le nozze di Figaro, which I saw at Salzburg in 2007. At the time (click here for the full review), I enthused:

Had anyone described it to me, I should have recoiled in horror. Somehow, this anti-Figaro provided a truly compelling dramatic experience. ... Claus Guth presented one of the best examples of Regietheater I have ever seen. What sounds perverse, to say the least, was thought through to the end. ... the most fizzingly champagne-like of operas was transformed into a harrowing, even sadistic drama, which came closer to the devastating hyper-realism of Così fan tutte.

Reference to the previous production – unfortunately, I have yet to see last year’s Don Giovanni, though I hope for a revival – might help to explain why my impressions were more mixed upon this occasion. Così might, I suppose, be convincingly transformed into its opposite, but I suspect that this would be a task even more difficult than that for Figaro and it does not happen here. What I find it hard to imagine it convincingly shedding is the artificiality lying at its heart, an artificiality that permits the unsparing realism with which Mozart – and it is far more he than Lorenzo da Ponte – lays bare the illusions of romantic love. Here instead we have a production somewhat realistic in the ordinary sense, a path which simply makes for a rather unconvincing plot. I am the last person to insist upon some kind of eighteenth-century fetishism, upon period costumes and a clear view of the Bay of Naples. But equally, it does not seem to me that transferring the action to what appears to be a modern apartment and turning the characters into modern characters who drink more than is good for them in themselves make for convincing drama. The aspects when such up-to-date references were pushed further merely distracted. For instance, it is a rare production that ensures Despina will not irritate. This production merely has her irritate in a different way, irrelevantly emphasising her identity as what would seem to be an Eastern European cleaner. Many of the audience – somewhat dubiously or even chillingly – seemed to find this hilarious. But should anything in Così be hilarious?

There are promising aspects to the production, but another problem, again in contrast to Guth’s Figaro, is that they were not always carried through. For instance, I was intrigued by how what appeared to be an original take upon the matter of the male disguises would develop. Ferrando and Guglielmo first wear masks, which seems full of potential in terms of the connection to Greek tragedy. Is it with masks that one might be able to bear the most horrific drama? They soon lost the masks, however. Then the reason for the girls failing to recognise their lovers is that they are blindfolded. Again, interesting: perhaps there will be a series of such reasons. This seems to be borne out by the subsequent positioning of men and women on different levels of the stage. However, following Despina’s appearance as the doctor – a most odd portrayal, involving (African?) fetishism and incantation of the word Mesmer, which broke up the account of the score – any pretence at disguise or an alternative thereto is discontinued. Either the problem has been forgotten, which seems almost incredible, it is considered irrelevant, which seems highly dubious, implying an ordinary-realistic tale of loose women who simply carry on with each others’ boyfriends, or Despina’s act – itself carried out without visual disguise – has changed everything in a way that remains obscure, or at least remained obscure to this audience member.

Where Guth scores very highly, however, is in the determination to place Così as the final work in a trilogy. He makes connections with Figaro – and, I think, Don Giovanni, certainly on the evidence of production photographs I have seen, the wood there increasingly protruding into the location of Così. The most striking visual connection is that of dress and nervous behaviour between Don Alfonso and the sinister Cupid figure – and if you listen to Da Ponte’s libretto, you will hear Cupid invoked repeatedly – of that anti-Figaro. Both create (necessary?) mischief, which might conceivably help us to confront harsh realities. The falling of feathers connected to both creates a further bond, mystifying yet perhaps also provoking the other characters.

Musically there was much to admire in this performance. I had been a little wary of the prospect of Ádám Fischer, having found much of his previous Salzburg direction of the work (2005) rushed and unyielding. Such was certainly not the case on this occasion, however. There was considerable variation of pace, generally well integrated into a broader tonal and dramatic framework. I could hardly believe that this was the same conductor, not least since recent fashions have tended to propel Mozart interpreters in the opposite direction. Whilst I might have preferred a larger body of strings, there were few instances in which this was much of a problem. The acoustic of the Haus für Mozart, formerly the Kleines Festspielhaus, compensated admirably, as did the renowned sheen of the Vienna Philharmonic strings. It was the woodwind section, however, which truly took the palm. These musicians were truly beyond compare, ravishing as perhaps only they and certainly only Mozart can. That cruelty which, despite the director’s efforts, was so often absent from the production was readily apparent in the savagery of such tonal beauty. As for those Viennese horns of cuckoldry... It was all the more unforgivable, then, that on more than one occasion such Elysian delights were disrupted by the ringing of mobile telephones. That is a form of cruelty adding no more to the drama than the incessant conversation of certain selfish members of the audience, or indeed the applause not only between acts but, more than once, within numbers. There were many people in the house for whom a life prohibition concerning Mozart would be too kind.

The cast was good, if not unforgettable. Perhaps the most consistently strong vocal performance came from Miah Persson as Fiordiligi, handling her coloratura with aplomb and possessed of a winning, attractive tone. Like every member of the case, moreover, she could act. Isabel Leonard’s Dorabella became more differentiated as a character with time, which is, I suppose, how it should be. Topi Lehtipuu at first proved somewhat variable as Ferrando, often impressing more in the recitatives than elsewhere. However, his character too developed in leaps and bounds, and the pain elicited by friction between him and Florian Boesch’s Guglielmo was a credit to both artists. Lehtipuu was allotted both of his second act arias, not the only case of music restored that is almost always cut. I was very happy to hear all of it. Boesch in the second act presented a more complex Guglielmo than is often the case: to be thoroughly disliked in his arrogance but then learning from his bitter experience and seeming the most disillusioned of all. Patricia Petibon was an audience favourite. She certainly acted well and sang well too, but her voice is rather plain. I was frankly perplexed at the mismatch between my reaction and that of most others. Rather to my surprise, Bo Skovhus sometimes sounded a little woolly, and fell short of the Alfonso gold standard presented by my various hearings of Sir Thomas Allen in this role. Nevertheless, Skovhus acted very well and at least as often employed his voice to good advantage.

If the musicians could not take my mind off some of the production’s shortcomings, that is not their fault. Even Sir Colin Davis, giving, a couple of years ago, the performance of his life at Covent Garden, could not do that, faced, admittedly, with a far more objectionable production. Disappointment here was relative and there were very considerable musical rewards.
Posted by Mark Berry at 5:08 pm