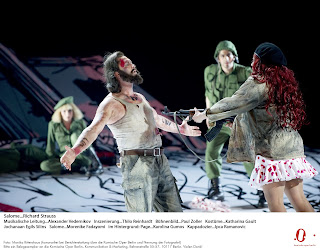 Confusion reigned in the ‘Dance of the Seven Veils’, the idea apparently being to substitute Herod’s weird and wonderful fantasies, though can anyone actually think of quite so many things during that time? John the Baptist and, I think, Jesus competed for attention, perhaps leaders of rival cults. Was one a false prophet or both? Who was who? And with whom would Salome throw in her lot? The cars and phalluses were too silly to be offensive, though one could imagine some finding it all blasphemous. A veiled woman suggested something more daring, but she did nothing more than stand there; clearly Christian sensibilities are fairer game than certain others. So far, so fantastical; perhaps it was revealing to some. However, confusion reigned throughout Thilo Reinhardt’s production, suggesting that the former chaos might have been more by default than a product of intention. Salome was reduced to cartoon status, replete with captions, and not only in terms of Paul Zoller’s garish designs. There seemed on one level to be plenty of ideas, or at least thoughts, but they never cohered into any particular idea, let alone Konzept; nor even did there appear to be any effort made to make them cohere. 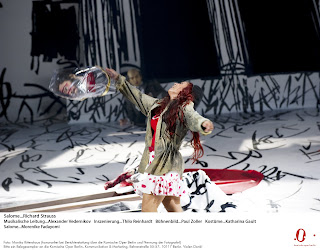 Reading the beginning of the synopsis, one senses a definite idea: ‘An emergency meeting in Herod’s palace. The future of the fundamentalist prisoner Jochanaan (John), “The Baptist”, doesn’t just involve the circle at Herod’s palace, consisting of Romans, Jews and the followers of the new Nazarene religion, but also the populace of the multiracial state.’ Whatever one thinks of that, and one-sided though it might be, it is not inherently absurd. However, it was difficult to detect much of such a view in the production, not least on account of a great deal of irrelevant flailing around. There appeared to be a point being made – fragility of political and/or religious conviction? – by Jews and Nazarenes changing allegiance, but the upshot was greater confusion. It seemed, whether this were actually the case or no, as though the singers had mostly been left to their own devices. Salome at times seemed to have become some sort of freedom fighter, sporting a revolutionary beret and rifle, yet that aspect came and went. Strauss’s – or Wilde’s – æstheticism did not seem to register – and that is surely what lies at the heart of this work. Camp it up by all means, if you must, but it all seems a bit pointless without a heightened, most likely suffocatingly excessive, sense of the æsthetic. Salome is no more interested in politics than Strauss is, perhaps even less so: she certainly has no interest in the offer of half of Herod’s kingdom. That is not necessarily a bar to a political Salome, but one needs more of a sense of what is at stake.

Morenike Fadayomi’s performance in the title role was spirited. It sometimes veered more towards the acted than the perfectly sung, but she had stage presence and used it. Egils Silins was an impressive Jokanaan, not merely blustering, a more credible object of Salome’s lust than often one finds. Andreas Conrad’s relished the inevitable high – or is it low? – camp of the role, whilst Christiane Oertel made a suitably nasty (and horribly dressed) Herodias. Quite why she acted as Jokanaan’s executioner, though, was unclear. Thomas Ebenstein, whom I have admired in previous performances at the Komische Oper, was a sweet toned, imploring Narraboth, though his musicianship was undermined by the initial boorish stage acts Reinhardt’s direction imposed upon him. For sadly, if the director had taken relatively little notice of the words, the music seemed to have passed him by entirely. Alexander Vedernikov’s conducting had its moments, especially when dance rhythms came to the fore, though it lacked as yet a longer sense of line. (This is, it must be said, a difficult score indeed, and not everyone, alas, possesses Karajan’s surety of command.) Nevertheless, the contrast between Strauss’s astonishing craftsmanship and the stage direction was glaring.
Posted by Mark Berry at 1:00 pm