ENO’s superlative Return of Ulysses has been my operatic highlight of the season so far; This Midsummer Night’s Dream in many respects comes close: such a relief after the well-nigh unwatchable Damnation of Faust recently endured. But this was not easy ‘relief’, Christopher Alden’s production proving intent on exploring the darker side of Britten and his work. It was telling that the discomfort of a certain section of the audience manifested itself in the unpardonable boorishness of booing the production team. Reactionaries who might just about have reconciled themselves to Britten’s music – forget Birtwistle... – did not want their ‘enjoyment’ ruined by something that went beyond kitschy tales from the Athenian woods. For those with ears to listen, as well as eyes to see, an opera that has its weaknesses emerged stronger and, a signal achievement this, managed both to chill the spine and to elicit genuine comedy. How many times has one previously consulted a watch during the Tedious Brief Scene of Pyramus and Thisbe? Not on this occasion. Excellent personal direction and acting, not least from Sir Willard White’s Bottom, made that scene a genuine joy, focusing attention on Britten’s clever parodies, which thereby emerged as more than merely clever (often a danger with this particular composer).

That said, the darkness is really the thing. Alden daringly – and no, I am not using the word ‘ironically’ – reimagines the opera in terms of a mid-twentieth-century boys’ school. I immediately thought of Britten’s own – and Auden’s – Gresham’s, a connection reinforced both by Charles Edwards’s superb set designs and a mysterious figure strolling around, observing, and to a certain extent participating, suggestive of Britten himself. (More of that figure anon.) Just in case one were in any doubt, the inscription above the school entrance forbiddingly – invitingly for some? – reads ‘BOYS’. The fairies are the younger boys, with Puck an older, apparently knowing member of the community. Oberon and Titania are an especially twisted master and mistress, free with their favours, clearly in competition for the favour of their charges. A nice touch is Titania’s schoolmarmishly wooden beating time for the fairy choruses. When Puck gets things wrong, he is subjected to a spanking by his master Oberon, who may already have transferred his affections to the Indian Boy. Clearly Puck will have to redouble his efforts, though his relationship to the Britten-like figure seems to grant him extra kudos. Lysander and Hermia explore their sexual awakening behind the dustbins, whilst the sadistic rejection of Helena by Demetrius and her masochistic response are especially cutting and credible, given his status as a highly popular member of the rugby team. Sue Wilmington’s costumes, here and elsewhere, strike just the right note. One can quibble, no doubt, about what the girls are doing there at all, but their presence does not really jar, and girls have a habit of sneaking in to such environments, wanted or otherwise. During their explorations, the boys are initially as inclined to play with each other, similarly the girls, as old habits die hard. The magic, when it comes, is all, or at least mostly, to be attributed to whatever it is that Oberon is smoking. Puck passes around the cigarette to devastating effect. It may sound contrived, but it really works on stage. And he threatens to set the entire school ablaze at the end of the second act.


Finally, the observer, himself earlier subjected to sado-masochistic tying up by Puck, is revealed to be the Duke, returned to his old school on the eve of his wedding and now again following the (play) reception. One often wonders, whether in Shakespeare or Britten, quite what the nature of his role should be: not here, for we were in for another turn of the screw. This is a tormented man, turned tormentor, who, following the rustics’ departure, manages to free himself from his respectable, echt-1950’s wife, returns to the school to revisit Puck, with whom he has earlier shared his neck-ties (a bond, it seems, born of a gift, or perhaps of identity). Puck, whom one might expect now to be triumphant, appears broken, perhaps literally. The abuse, and abuse it undoubtedly it is, has taken its toll. Rather than force himself upon the boy again, the Duke, perhaps chastened, as a Puck himself in later life, slinks away. Punk’s final words are defiant, but we know that this boy will remain troubled. 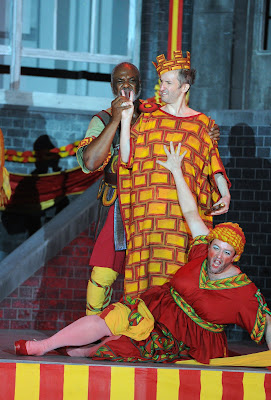 The cast entered into this scenario with gusto. Indeed, one had the real sense of a company performance, and even if it were not so in the strictest sense, it is surely no coincidence that many of these artists have worked together before. Iestyn Davies, sadly, was ailing, similarly his understudy Iestyn Morris, so Davies acted the role of Oberon, whilst Will Towers sang from the side of the stage. With that performance, Towers has doubtless ensured himself of a major role of his own at ENO before long, with a hauntingly beautiful rendition that never once lapsed into stereotypical hooting. (I cannot say the same for a certain other, highly celebrated counter-tenor, whom I heard a few years ago at Glyndebourne.) Allan Clayton was also, we were told, suffering from an infection, but one would barely have known: his Lysander remained an impressive portrayal. Benedict Nelson’s Demetrius was full of youthful masculine swagger, which yet retained a propensity, understated though it may have been, to equally youthful self-doubt. Tamara Gura and Kate Valentine made an impressive pair of female lovers. White’s excellent Bottom, blessed by a genuinely comic vocal delivery I have not heard in this artist before, was complemented by an excellent oddball assortment of rustics, from whom Michael Colvin’s Flute should be considered first amongst equals. The Donizetti parody truly hit home. Paul Whelan, whom I previously admired as Claggart in Glyndebourne’s Billy Budd, proved a haunted and haunting Theseus: this Duke will linger long in the mind. Jamie Manton was equally impressive as Puck, his adolescent cockiness twisted into something almost too painful to watch; memories of Manton’s fine performance will doubtless prove equally difficult to dispel. Magic, as the production suggested, only takes one so far: to treat it is a refuge from reality is at best irresponsible.


Underpinning this real company success were the excellent contributions of Leo Hussain and the ENO Orchestra. Hussain, making his ENO debut, conducted as if he were a knight of the realm, so readily did Britten’s style and structure speak from his baton. One would not have been surprised to discover that it was a Sir Colin, or a late Sir Charles, save that neither of those conductors, I suspect, would have warmed to Alden’s production. Magic was there: those harps, the woodwind, the slithering fairy-music. We were left in no doubt, however, that malevolence was always present too. (What, after all, is a forest? It is hardly a place of straightforward comfort. Think of Hansel and Gretel.) Above all, and this is crucial in music that can otherwise tend to meander, Britten’s score was shown to be constructed. The booers would doubtless have preferred not to be reminded of Britten’s twelve-note experimentation, but so much the worse for them. Boys from Trinity School, Croydon, proved impressive too, clearly well coached by their Director of Music, David Swinson. 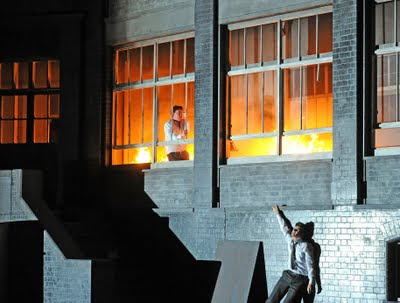 It was an interesting coincidence upon returning home from the Coliseum last night, to post a quick summary on Twitter, to see the name of Melanie Phillips ‘trending’ there. (Reader: if you do not know who she is, may you at all costs strive to retain your blissful ignorance. Suffice it to say, that she is a ‘commentator’ to the humourless, far right fringe even of the rabid, petit bourgeois bigotry that infests the Daily Mail, Britain’s answer to Der Stürmer, both then and now. To its eternal discredit, The Spectator offers her a platform upon its website too.) It appears that Ms Phillips had wound up – and she appears to mean what she says – a good section of the television audience for BBC television’s Question Time, doubtless by spitting and cursing upon the slightest semblance of human charity. One can well imagine how she and her readers would have reacted to this production: not a justification in itself, but not a bad sign either. As Germaine Greer has pointed out, the obsession amongst large sections of our society with paedophilia reflects their own paedophilia: witness the photographic reproductions of missing children, especially girls, whereas for those of us not interested, we are simply not interested and should prefer to hear about something else (our ruling class desperately trying to keep it from us). They want to ‘hear all about it’ but react violently when their motives are questioned, let alone examined, hence the mittelständisch booing. The more vicious the society, the more vicious the individual, as we shall be reminded when the Royal Opera revives Peter Grimes next month. ENO would also seem to have set the scene very nicely for Nico Muhly’s Two Boys, from which I shall also report in late June.
Posted by Mark Berry at 12:55 pm