(sung in English, as The Damnation of Faust)

This was, I am afraid, a self-congratulatory car-crash, from beginning to end. Alarm bells rang when opening the programme to reveal images from the Third Reich. Still louder did they ring when perusing an interview between director Terry Gilliam and Edward Seckerson, in which the former’s grasp of German history was revealed to be at best shaky. Take this passage on the origins of the First World War: ‘The Prussians’ mentality overwhelmed the Romantic side, except the Romantic side was always there in the people.’ The most telling sentence, however was the following: ‘I could have approached The Damnation of Faust by reading a great deal about Berlioz but I avoided that.’ Why bother with Berlioz when one can have Gilliam instead? 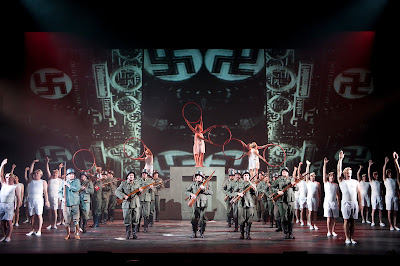 So far, so bad, but good things can sometimes come from conceptions that do not necessarily deserve them. Not in this case, alas, for what we have is a (car-)crash course in German history according to Gilliam. Having Faust consider Nature and her renewal in a Caspar David Friedrich landscape (Hildegard Bechtler’s designs were throughout impeccable, when judged on their own merits) is not a bad idea at all, worryingly hackneyed though some of those wondrous Friedrich images have become. (I fear a favourite painter may be going the same way as Klimt or Monet: perhaps it is time for a break.) But all that happens thereafter is a series of irrelevant settings that initially speed through history chronologically – the Marche hongroise a dance for Archduke Franz Ferdinand and moustachioed military men from other nations! – before seemingly becoming stuck in the Third Reich. At the initial rate of change, I wondered whether all might culminate in a panegyric to the euro or Angela Merkel’s apotheosis as vision of the Goethian ‘eternal-feminine’. But no, Gilliam clearly always wanted to be in the Third Reich, and doggedly remains there. 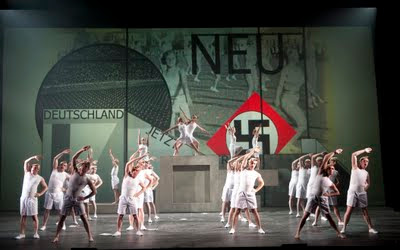 It might have worked, but there is barely even an attempt to make the Nazi ‘entertainment’ – and that, I am afraid is very much how it comes across – connect with the work allegedly being staged. In a brief prologue, Mephistopheles informs us that ‘my struggle can be translated as mein Kampf’. You don’t say? If that is as Faustian as one can render the Third Reich, one might as well give up immediately. Incomprehensibly, large sections of the audience dissolved into hysterical laughter: is translation of a simple phrase really that hilarious? Presumably these were the same people who awarded the director an ecstatic ovation at the end: fans of Terry Gilliam, it would seem, rather than people who might have an interest in La damnation de Faust. Auerbachs Keller sports a poster of Lenin, torn down by brown shirts (of whom Brander is one). The flea song is for some reason treated as anti-Semitic propaganda. (Perhaps, again, it might have been made to work, but it is difficult to discern any attempt.) Berchtesgaden appears and later re-appears. For some reason, out-of-date (even for 1930s Bayreuth) images of Siegfried and Brünnhilde are enacted at a cocktail party; Faust beds down with Brünnhilde. According to Gilliam, ‘I knew I had to have Wagner in the production somewhere: so in the narrative we go to Berchtesgaden.’ Further comment seems superfluous; in any case we have swiftly moved on to a racist depiction of the 1936 Berlin Olympics, in which the athletes sport blond (Aryan, you see) wigs. 'Marguerite Oppenheimer' is Jewish, for no apparent reason; her menorah-lit night with Faust takes place against the backdrop of Kristallnacht. Again, Bechtler’s sets are powerful indeed: if only they could have been used for another production, preferably of another work. Jews are deported, Marguerite amongst them. Video trickery that draws attention to itself – however finely accomplished – whisks Faust and Mephistopheles off to a final scene of scarlet kitsch. (That may be partly Goethe's fault: how tiresome Gretchen is, and how relieved one is by her absence from Busoni's Doktor Faust! Nevertheless, the idea that redemption is somehow present in a Holocaust setting is problematical, to say the least.) 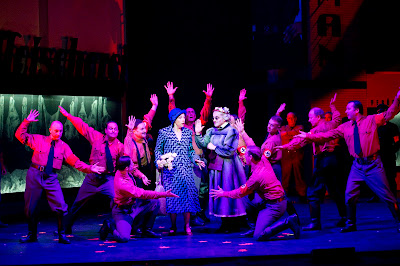 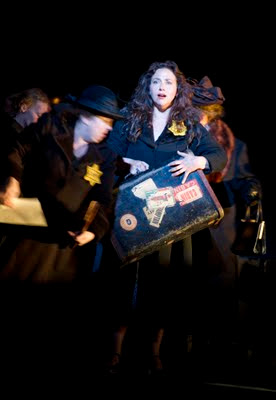 I am in no sense opposed to operatic, or other, productions that deal with the period in question, though I should have thought that there were more obvious candidates amongst works than La damnation de Faust. Stefan Herheim’s Parsifal stands, in my experience, in a class of its own, but I was also greatly enlightened by the Cologne Opera’s Capriccio, a powerful production that engaged with the work and its creation (click here to read some related thoughts upon Strauss, with interesting discussion in the comments below). This, however, does no such thing. It veers dangerously close to Springtime for Hitler, albeit without the jokes (or at least the genuine comedy). One could do the same thing with equal justice, or injustice, with or to pretty much any other work, since there is no discernible attempt to engage with Berlioz; it might as well be a Third Reich Barber of Seville. It simply came across as an unholy marriage between a desire to put some Nazi costumes on stage and a racial slur against the Germans, without even a degree of thought having been put into the latter. When Friedrich Meinecke spoke of the ‘German catastrophe’

, I do not think it was this sort of catastrophe that he had in mind. 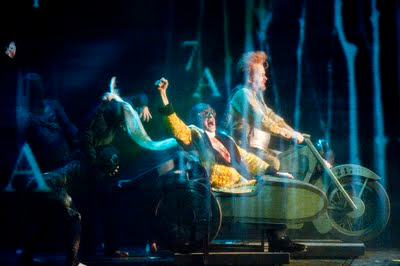 I have said nothing yet about the music, which, sad to say, reflects the apparent priorities of the evening. Berlioz’s score was apparently reduced to the status of a film track to an entirely different drama, such as it was. It was not helped by often lacklustre conducting by Edward Gardner. Gardner’s initially downright insipid reading seemed relatively invigorated after the interval, but Berlioz’s extraordinary nervous energy often went for nothing, sounding closer to Massenet than Berlioz as we have come to know him from a conductor such as Sir Colin Davis. The ENO Orchestra was, however, on very good form, when considered apart from its direction, likewise the choral forces amassed. Christopher Purves’s Mephistopheles stood out amongst the singers. Purves exhibited strong stage presence and, with the odd exception, equally fine vocal presence. Peter Hoare seemed to be trying his best as Faust, but was hamstrung both by his too-youthful-mad-scientist look, and by miscasting. He often struggled, especially at the upper reaches of the range; memories of Nicolai Gedda did not help. Christine Rice proved a solid enough Marguerite, though she could not conceal what was lost by translation into English. (If it must be done, it might as well be done by a Berlioz scholar such as Hugh Macdonald, though I was surprised at the number of forced rhymes: ‘tender’, ‘surrender’, and ‘splendour’, for instance.) 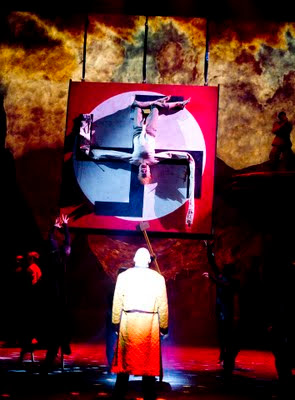 Whether Berlioz’s légende dramatique was a wise choice to stage at all might have seemed more of a question with a more convincing staging. There are, after all, three operas by the composer, but ENO is not alone in its curious desire to stage works that were never intended to be staged. ENO’s own recent Messiah springs to mind. Sometimes that can work; here, alas, Berlioz was never given a chance. I cannot imagine anyone encountering his music for the first time having been encouraged to explore its riches further. There is no harm in principle in staging La damnation de Faust; it has been done many times before, and I should have loved to see, for instance, what La Fura del Baus did with it in Salzburg. (There is a DVD, though I have not seen it.) Next time, however, let it be Sir Colin, the LSO, and the bare walls of the Barbican.
Posted by Mark Berry at 1:51 pm