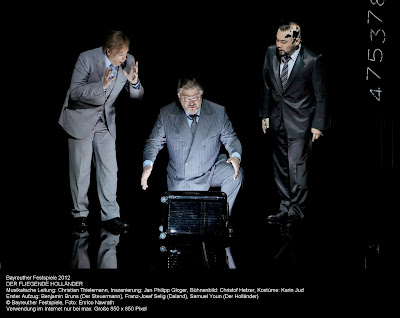 Assuming that Rienzi and Wagner’s two earlier operas will not enter the regular Festival repertory, and discounting Beethoven’s Ninth Symphony, The Flying Dutchman was my final work from the Wagner canon to hear at Bayreuth. Unusually, early controversy was elicited not by the production, but by casting. Evgeny Nikitin, as the whole world must now be aware, was forced to withdraw, or ‘asked to resign’, owing to an absurd over-reaction to a tattoo claimed to be a swastika but which was not. Bayreuth’s nervousness concerning the slightest possible connection to its darkest period is understandable, but the Festival would be far better advised to confront its past head on, as Katharina Wagner seems commendably determined to do, rather than to resort to such quick-fix public relations gimmicks, which will always backfire.


Nikitin is a fine artist and was sorely missed, his replacement Samuel Youn to be lauded for acting as a last-minute replacement but hardly for his performance. Whilst he started off resoundingly dark and clear of tone, he did not reach the end of his monologue before intonational problems set in. Alarmingly, there were entire phrases during his performance when he was as much as a quarter-tone off-pitch; it was not a matter of odd notes. Perhaps the audience was being indulgent on account of the special situation, but this was some way by now from the first night; I could not help but think that the warm reaction Youn received signalled an audience for the most part unable to discern his tuning, even if one were to put aside a rather dour stage presence. 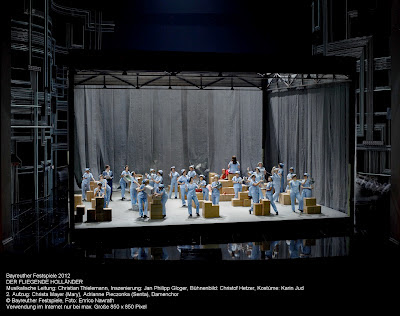 His colleagues, save for a rather nondescript Mary – why does this role seem so difficult to cast? – provided a good deal of vocal compensation. Adrienne Pieczonka had a few moments in which her tuning too left a little to be desired, also on occasion her diction, but for the most part, hers was an impressive, unusually womanly, performance. This Senta was no girl and seemed, which fitted well with the production, to know very much what she was doing. Her Erik, Michael König, showed himself possessed of a fine, mellifluous tenor, even if he were a little stiff on stage. Benjamin Bruns was quite a revelation as the Steersman. His is a still more mellifluous, at times ravishingly beautiful, voice; I wished that more had been written for him. Perhaps best of all was Franz-Josef Selig’s Daland, unerringly centred with respect to pitch and words, and just as unerring when it came to tonal warmth. Perhaps he ultimately sounds a little too kindly for the role, but that is really to nit-pick. 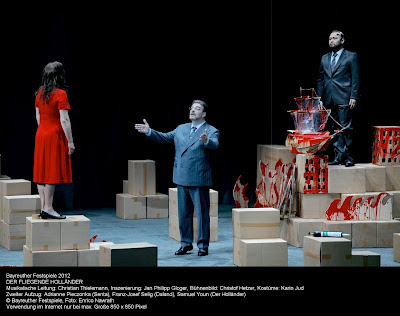 Christian Thielemann drew an echt-Bayreuth sound from the Festival Orchestra. He certainly knows how to work both orchestra and Festspielhaus acoustic. Not that this reading was undifferentiated in its darkness; there were splendidly light, almost fairy-like, Mendelssohnian textures to be enjoyed too. However, there were problems with Thielemann’s performance – at least for me, though the audience again reacted almost ecstatically at the endless curtain calls. A recurring trait in some, though far from all, of his performances is a tendency to pull around the music arbitrarily, almost because he can. Whilst it can occasionally prove refreshing, if only as a counterblast to unimaginative or doctrinaire-metronomic performances, here there were too many occasions, as in his Philharmonia recording of Schumann’s Second Symphony, in which it sounded merely contrived and interrupted the flow. There was a wonderfully pregnant slowing at the end of Senta’s ballad, fully justified by the anticipation it engendered. Balanced against that were frankly bizarre gear-changes such as a sudden slowing during the transition to the third act. (The opera was performed in an unbroken span, and in Wagner’s later version.) I was also a little surprised to hear the old operatic forms so clearly delineated; yes, Wagner marks them in the score, but I have yet to hear a performance of the ‘number-opera’ as opposed to the ‘music-drama’ variety that has proved entirely convincing. More than once I longed for Klemperer’s level-headed yet visceral communication of the score. Choral singing was first-rate throughout.


I was left somewhat nonplussed by Jan Phillip Gloger’s production, new this year. It has some excellent visual touches, not least thanks to Christof Hetzer’s striking set designs and Urs Schönebaum’s evocative and equally striking lighting. I liked the use of red to denote Senta’s realm of adventure, drawing together her dress, the red with which she daubs boxes to bring about her own modest Dutchman installation – the equivalent to the painting – and the sometimes shocking use of blood. And the way silhouetting is imaginatively employed to make the fantasy of not only a boat but a liberating cityscape is impressive indeed. The modernity of Daland’s factory is chillingly conveyed, but it is not entirely clear to me that it is enough for a production of this work to indict contemporary capitalism – contemporary to us, that is. I have no particular problem with the setting being an electric fan factory: spinning of a sort, I suppose. Yet it did not seem to add anything very much, save for the very end, when, courtesy of an opportunistic mobile telephone picture taken by the Steersman, Wagnerian redemption is splendidly undercut by transformation of the fan design into a memento of the suicide of Senta and the Dutchman. That was by far the most savage indictment of the evening of our sick and sickening system of production. 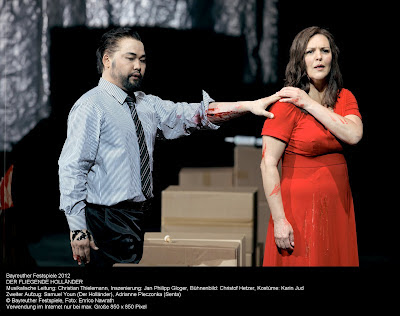 The presentation of the Dutchman as a weird, android-like figure, presumably a product thereof, seemed more odd than anything else. At his entrance, wheeling in – yes, you have guessed it – a suitcase, he appeared to me to be injecting himself with a syringe. He did not seem very practised at it, for a great deal of blood was spilled. Apparently that was the point, cutting himself to show that he was human after all, but I was not the only person to have missed that in the theatre, having instead to resort to a programme interview. There were, indeed, too many instances where the action, especially for a relatively small theatre, was on too small a scale properly to understand, or was simply, at least to me, obscure. I had the sense that there was a better production waiting to break out; let us hope that the Werkstatt principle will enable refinements in years to come.

The "regie" practitioners take themselves [and many here do
as well], much too seriously; all they're trying to do is marry great music with images of their
own imagining, thus, they are essentially misplaced
film directors