John McIntosh Theatre, London Oratory School
Gretel – Llio Evans
Hänsel – Susanne Holmes
Mother, Witch – Shuna Sendall
Father – Stephen John Svanholm
Sandman, Dew Fairy – Rahel Moore
James Bonas (director)
Carl Davies (designs)
Paul J Need (lighting)
Katie Higgins (costumes)
Co-Opera Co. Orchestra
Stephen Higgins (conductor)
After a couple of weeks taking in the delights and challenges of Salzburg and Bayreuth, I might well have become a little jaded. Not a bit of it, and not least on account of this delightful performance of Humperdinck’s Hansel and Gretel (sung here in English) by the enterprising Co-Opera Co. Even my prejudice, or considered opinion (delete as applicable), against opera in translation wilted away, though I remain some way from ever wishing to hear Figaro in German again, save for Furtwängler. David Pountney’s lively, intelligently unfaithful translation suited occasion and production to a tee, and, wonder of wonders, one could hear almost every word of it too.
I should also have been sceptical about the prospect of a reduced orchestration. Even if the orchestra took a little while to settle down – the Overture had its rocky moments – taken as a whole, this proved quite a treat. One does not expect the Staatskapelle Dresden, nor Sir Colin Davis, in such circumstances, but there were genuine compensations, the woodwind in particular shining, and inner parts emerging as if from a Mozart serenade. Stephen Higgins shaped Humperdinck’s lovable score with care and wisdom; we were not only in a safe pair of hands, but one with a sense of theatre too. If, in the abstract, I think of the score as a little too derivative, its Meistersinger-isms (with no apology for the near-Teutonism) verging upon plagiarism, in performance it rarely fails to lift the spirits and certainly did not fail to do so on this occasion. I was surprised, moreover, that I really did not miss the chorus at all; instead I was able to hear more of the orchestra and experience the relevant moments as if they were further ‘pantomimes’.
James Bonas’s production worked extremely well, set in the austerity – sound familiar? – of that ghastly decade, the 1950s. The Mother’s housewife get-up, the washing on the lines, the hollowness of ‘family values’, and of course the very real danger of child abuse therein, were present in our dramatic experience without being unduly hammered home. There was a genuinely chilling moment, however, when the Witch showed pictures of missing children on an overhead projector. Fairy tales, as everyone should know but a surprising number refuse to recognise, are anything but saccharine, and that becomes doubly so with the Brothers Grimm. The appearance of her house offered a genuine coup de théâtre, every aspect of the staging both imaginative and resourceful. 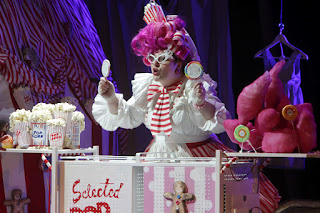 Perhaps the most crucial aspect of Co-Opera Co., however, is the opportunity it provides for young singers, both in its workshops, graced by the likes of Sir Thomas Allen, the late Philip Langridge, Janis Kelly, Ryland Davies, et al., and in actual performances. I was especially taken by the rich tones of both Shuna Sendall as Mother and Witch and Rahel Moore, doubling up as Sandman and Dew Fairy. Both can act splendidly too, doubtless testament to intensive work from the company. Llio Evans and Susanne Holmes made a convincing, complementary sibling pair of girl and boy, whilst Stephen John Svanholm relished the comic side of his role as their father.
Future Co-Opera Co. Performances are scheduled for Wolverhampton, Croydon, Bury St Edmunds, Darlington, Wellingborough, Blackpool, Epsom, Staplehurst, Buxton, Manchester (RNCM), Yeovil, and Hertford: not all offering Hansel and Gretel, for Don Giovanni and The Magic Flute are on offer too. Those interested in assisting the excellent work of Co-Opera Co., whether financially, for instance by contributing to the Philip Langridge Bursary Fund or becoming a friend, or simply by attending performances, should e-mail Kate Flowers, the company's artistic director, at info@co-opera-co.org, or visit the website, https://www.co-opera-co.org.
Posted by Mark Berry at 7:23 pm