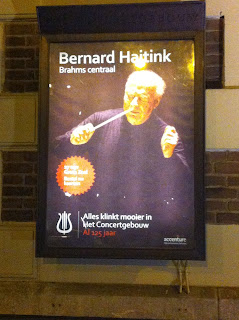 Nothing anyone says will prepare a newcomer for the acoustic of the Concertgebouw. This was my first visit, and I hope it will be the first of many. (There will certainly be at least one more, a second Brahms concert.) I shall not try to describe the sound, suffice to say that it must be the warmest, most rounded I have heard, with the possible exception of the very different Musikverein. Such things come to naught without musical excellence, of course, but once again a visit abroad, or even out of London, makes one realise how unfortunate we are in terms of orchestral-size concert halls.

It was a chamber orchestra we heard on this occasion, not a small chamber orchestra, but one of what I should think of as Mozartian proportions, with a string section extending down from twelve first violins to four double basses. (Not, I hasten to add, that Mozart cannot sound wonderful with a larger orchestra!) Before hearing this concert, I should have been something of a sceptic concerning chamber-orchestral Brahms. Doubtless the warmth of the acoustic played its part, but so did the crack players of the Chamber Orchestra of Europe. There was not a single occasion during the Double Concerto when I wished for a larger orchestra, much as I should have loved to hear the Royal Concertgebouw Orchestra on home territory. (Next time, maybe!) I have heard wonderful things about the COE’s recent, quite intensive collaboration with Bernard Haitink, but again, one has to hear these things for oneself. Joined by the Capuçon brothers, there was here a sense of that celebrated line from Die Meistersinger, perhaps as close as Brahms and Wagner ever came: ‘Es klang so alt und war doch so neu!’ Haitink imparted the wisdom of an old Meister, of course, and yet there was nothing remotely stuffy, pedantic, or set in its ways, to his interpretation. The COE sounded just as invigorated as he did, lifting itself to something different from an orthodox symphony orchestra, but equally different, or perhaps more so, from the small-scale nature of what has come to be thought of as chamber-orchestral playing, the twin intimacy and intensity that seem to be taken as read from an Abbado-founded orchestra being equally present even many years on. And the violinist and cellist brought both youthful vitality and a true sense of old-world style. Truly, then, this appeared to offer the best of all possible worlds.

Gautier Capuçon’s opening phrase resounded with a depth that set the scene for the rest of the performance. This was actually the only occasion on which I heard a little intonational slip, but it mattered not a jot, Beckmessers will be alarmed to note. Naturally it was Gautier who made the greater impression at first, simply on account of Brahms’s writing, but the sweetness of Renaud’s violin tone was soon an equal wonder to savour; likewise his perfectly judged portamenti. Rubato and tempo variations, both in the first movement and later on, were never confused; Haitink knew what he was doing, never exaggerated, but let the music speak for itself, an illusion (Wahn) perhaps, but when a latter-day Sachs is conducting, all the better for it. The grand scale of that first movement made its point in a personal yet not idiosyncratic manner. It was not granitic; if anything, it seemed to have the mark of a master Wagnerian upon it. Haitink’s perhaps surprisingly Romantic view of Brahms was not that of, say, his great Amsterdam predecessor, Willem Mengelberg. It was marked rather by a freshness – many thanks here to the superlative COE woodwind – that took inspiration from Mendelssohn and Schumann, without reducing Brahms to the status, as it were, of a late early Romantic.

The slow movement was heard as if a song sung in a single breath. Again Schumann and Mendelssohn sprang to mind. All sorts of duets, trios, quartets, etc. were to be heard, as the soloists conversed with their orchestral counterparts. I could not help but think of Così fan tutte. Indeed, it was possible to imagine Fiordiligi and Dorabella playing games as they chose – what an impossible task! – between the blond player and his dark brother. The finale seemed ‘right’ in every respect. It had the character of a finale: perhaps an obvious point, yet it is hardly to be taken for granted. Not for the first time, we heard the shadow, productive rather than forbidding, of Beethoven – and not least in the combinations of harmony, rhythm, and colour, again especially with respect to the woodwind. This was musical, not artificial, excitement, every participant seeming to draw out the best from everyone else. A truly outstanding performance, the best I have ever heard of this work.

Had it not been for that performance, I doubt that I should have had any qualms whatsoever about that of the First Symphony. Any reasonable person would not, and this was by any standards again a masterly reading. Of the four Brahms symphonies, this one took the longest for me to ‘get’: not in the sense of arrogantly assuming to understand it, but for me not simply to be bemused by it. Some people – more than you might expect – would claim that the fault lay with the composer; cue turning round Brahms’s notorious reference to ‘boa constrictors’ and the form of Bruckner’s symphonies. They would be wrong. It was doubtless partly a matter of my own immaturity, but also, I think, a matter of waiting for the right performance to come along, since this symphony suffers especially with respect to conductors who do not comprehend its tightly-knit organisation. (It stands at least as close as the Fourth to Schoenberg, indeed, if anything, closer.) Hearing within close succession Daniel Barenboim conduct the work with the Staatskapelle Berlin and then Furtwängler on record marked my eureka moment a good few years ago.

Haitink’s account with the COE was only the second I have heard that made sense of the work, the first having been Barenboim’s. That in itself ought to be commendation enough. And indeed it possessed many of the virtues of the concerto performance. Throughout there was a strong sense of line – strong enough, indeed, that I wondered what the problem could ever have been held to be with the work. The first movement’s introduction led as naturally as could be into the exposition proper; tension never sagged. Brahms’s two inner movements evoked both kinship and difference – and, most importantly of all, progression, as did the four movements as a whole. The woodwind section proved as verdant as previously. And if there were a few occasions when I felt a pang of regret that there were not more strings, this Mozartian complement worked wonders and never sounded in the slightest bit stretched, their tone in general as glowing as the acoustic – insofar as one could make such a distinction. The conductor’s refusal, or better disinclination, to linger in the Andante sostenuto was no sign of brusqueness, nor of unwillingness to yield; but it brought the music closer to a Schumannesque intermezzo than one often hears, a reading perhaps especially valid for a chamber orchestra. Schubert was heard to be just as much Brahms’s progenitor – that Harmoniemusik! – as Bruckner’s in the third movement. Haitink’s unwavering yet subtly flexible sense of line guided the twists and turns of the finale. ‘That’ theme was lovingly, faithfully, yet individually connected to Beethoven, and there was triumph in the final arrival.

And yet… I retained a lingering doubt, alongside wholehearted admiration for Haitink’s sureness of touch. Had it perhaps sounded a little too easy, too comprehensible? Barenboim, I seemed to remember, had exulted in the very difficulty of Brahms; his reading had stood closer to Schoenberg’s ‘Brahms the Progressive’. Certainly there had been more metaphysical striving, and a darker, more ‘German’ tone to his great orchestra. Rank ingratitude, of course; this was a noble, dignified, in many ways revelatory account. Yet one cannot have it all; Brahms’s symphonies are greater than any one interpretation will ever permit.  So maybe the ‘problem’, not really a problem at all but an opportunity, a provocation even, lay partly with Brahms after all.