Wagner Rescued from the Opera House?


(My editorial to the November 2013 (7/3) edition of 'The Wagner Journal'. For more information on its contents and for instructions on how to order a free electronic introductory copy, click here.) 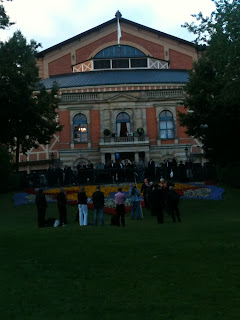 ‘The most admirable twin-genius of musical composition and dramatic poetry. Add to that the fact that he is at the same time the dramatist, decorator, machinist, copyist, Kapellmeister, and schoolmaster par excellence when it concerns his own works, and tell me if he has not in him the stuff of some Indian god with any number of heads and hands.’ Thus did Liszt describe Wagner in a letter written 180 years ago, when Wagner was still formulating his Ring project. The praise might have been yet more fulsome, though nevertheless accurate, even understated, had Liszt been writing in the aftermath of the Ring and Bayreuth. The multivalent nature of Wagner’s achievement is part both of what attracts us to him and what makes our efforts to deal with him an extreme case of Beckett’s imperative to ‘fail better’.


This issue covers a number of Liszt’s divine bases, and alerts us moreover to ways, some of which Wagner might never have imagined, in which we might consider his life, work and legacy. David Cormack tells a fascinating episode from London theatrical history; Laurence Dreyfus looks at Wagner as musical storyteller in Parsifal; an unusual interdisciplinary approach, even by Wagnerian standards, is brought to bear on Wotan’s eye by Michael Trimble, Dale Hesdorffer and Robert Letellier. Reviews consider Wagner performances, live and recorded, ranging from his city of birth, Leipzig, through a city of exile, Zurich, to the ever-contested festival theatre he constructed at Bayreuth.


But it is the seriousness, readily yet rarely successfully parodied, of Wagner’s vision for musical drama that arguably offers his greatest legacy; a truer appreciation of the Gesamtkunstwerk, if we must call it that, extends beyond the merely agglomerative. In that respect, as the bicentenary year draws to a close, we stand as Wagner’s heirs – which musical dramatist of any note has not felt his influence, if only, Stravinsky-like, to rebel against it? – and as the ready target of his rebuke. Wagner’s fulminations against the musical and theatrical practices of his time seem as relevant as when he penned them; so does the alternative he offered, not just in volumes of theory, but in his series of dramas. Pierre Boulez, not only one of Wagner’s great interpreters, but also his successor as composer, conductor and educator, thus extolled him for having loathed a system in which ‘opera houses are […] like cafés where […] you can hear waiters calling out their orders: “One Carmen! And one Walküre! And one Rigoletto!”’ Not for nothing did Boulez, in a celebrated interview with Der Spiegel, echo Wagner’s prescribed ‘fire-cure’ for Paris and the concluding conflagration of Götterdämmerung, suggesting that the ‘most elegant solution’ might be to ‘blow the opera houses into the air’.


Wagner’s works, then, have continued to declare their incompatibility with existing conventions and norms. Maybe it is time once again for us to consider whether they belong in the opera house at all; if they do, it is undoubtedly more as critic, not only of opera’s practices, but of those of late capitalism at large, than as the comforting, ritualistic repertory pieces to which ‘Wagnerians’ would reduce them.