For Hans Sachs's birthday: a free copy of The Wagner Journal to new readers 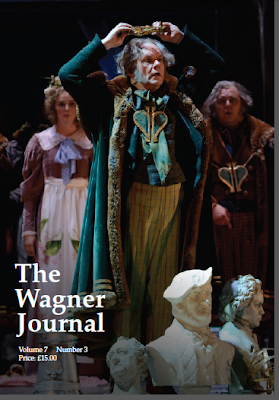 5 November has many resonances, especially for Englishmen, but it is also Hans Sachs's birthday, the Nuremberg poet having been born on this day in 1494. He would go on to write more than 6000 poetic works, including Meisterlieder, comedies, tragedies, and Shrovetide plays. Nowadays, of course, his principal, though far from exclusive, renown, is as Wagner's Meistersinger manipulator of Wahn: a real-life Wotan with a coping mechanism, we might say, though the profundity of Wagner's exploration of art dissolves all notions of 'real' life. So too did Stefan Herheim's recent Salzburg production of Die Meistersinger. Here is a picture of Michael Volle in that production; note the busts of three titans of heil'ge deutsche Kunst in the foreground: Goethe, Wagner, and Beethoven. (Goethe too had contributed to Sachs's latter-day fame.) I chose the picture as the cover for the November 2013 issue of The Wagner Journal, which I guest-edited. It includes a review of that brilliant staging. Here is a list of the contents: 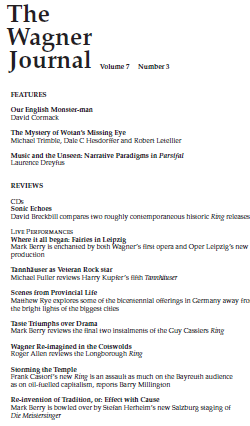 Anyone wishing to buy a copy, or to subscribe, may do so by clicking here. However, if you have not previously done so, it is possible to obtain a free electronic introductory copy by e-mailing the journal at thewagnerjournal@btinternet.com.