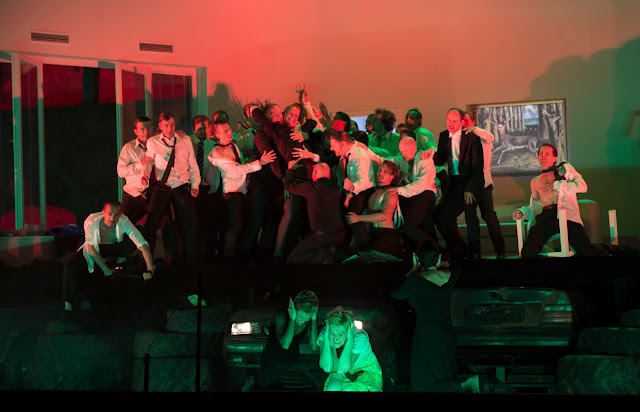 Director Peter Konwitschny is at pains, in a programme interview, to dissociate the work from the merely ‘Mexican’. ‘We saw,’ he claims, ‘the sign warning us not to turn off into the dead-end marked “Mexico”’. Before that, we read Konwitschny: ‘It’s not about Europe/America or Mexico/Spain, but Man/Woman.’ Such might be the case for Konwitschny’s staging, though not, I think entirely, but I am less sure that it is the case for the Musiktheater (an interesting, not-quite-Wagnerism) itself. It is certainly not to be reduced to any one particular polarity, as the oft-repeated, Antonin Artaud-derived, ‘Neutral, Weiblich, Männlich’ (‘Masculine, Neuter, Feminine’ – not always, notably in that order) seems to remind us. And the space available for the mediating – or original? – ‘Neutral’ is not always clear, perhaps does not even survive, or at least survive in its initial form. Is it perhaps – and this might be a Wagnerism of sorts – in the orchestra? In Rihm’s own libretto, which, taking Artaud’s Le Théâtre du Séraphin as one of its building blocks, would thus both suggest and reject some form of verbal (perhaps even colonial?) supremacy?

With such an enterprise, it is, of course, difficult to know where to start, and I have probably stepped ahead of myself on one strand already. I shall attempt no clear division between work and staging, since such was not my experience – and indeed would not be possible on the basis of an initial encounter. (Frustrating, yet inevitable and indeed in some sense fruitful?) There is a perhaps predictable, yet already surprising, identification of Montezuma with the feminine – and not only in voice – and Cortez with the masculine. Rape occurs early on; does it not always? But before that, and returning at long last to my initial point concerning Mexico, we have had a long, introductory, introduction, or perhaps immersion, into the landscape. The first of three parts, ‘Die Vorzeichen’/’Omens’; ‘Bekenntnis’/’Confession’; ‘Die Umwälzungen’/’Upheavals’) has drummers surrounding the audience lead us in for a few minutes before the conductor has even arrived, and indeed before the audience has received the signal to sit and to be quiet. The drum melodies, Rihm writes, are ‘the melody “of a landscape that senses the approach of a thunderstorm”’. They do not – or at least, did not to me – feel ‘Orientalist’, or better ‘Occidentalist’; yet, at the same time, it is difficult, upon reflection, not to think that in some sense they must be, and, as the action unfolds, that they have, perhaps knowingly, been presented, even constructed as such. Oppositions, then, not entirely straightforward, continue to frame, to participate, to incite. 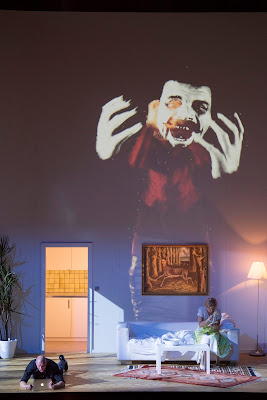 Rihm’s score, as often with this composer, covers a broad canvas in any number of respects. Yet, doubtless partly as a matter of the excellence of staging and all performances, though not only, I think, as a matter of that, it offers the composer at his integrative as well as his discursive best. Schoenbergian Sprechstimme – can we not but think of Moses at times? – vies or collaborates with choral writing and vocal amplification that bring to mind Nono and Lachenmann. Something far more Romantic, the ghost of Mahler perhaps, or of Strauss, swells up in the orchestral strings (fewer than one perhaps realises). Lyricism – whether vocal, or solo instrumental – that would surely have brought a smile to the face any of those composers has one melt, and at the same time has one suspect, has one question, not least in light of what we see and do not see on stage.

Konwitschny makes a strong case for his conception of male-female incomprehension. Not just in the violence, whether it be of Cortez towards Montezuma, of the movement choir (which, in a brilliant coup de théâtre, stands up and reveals itself as initially having been seated in the audience) towards the golden (yes, gold again brings us back to Moses and, of course, to the idea of the New World) female, danced portrayals of Malinche, ‘who speaks with her body’. The living room in which most of the action takes place – the rest surrounding that space – has at its centre Frida Kahlo’s The Wounded Deer: both image and knowledge of Kahlo’s relationship with Diego Rivera contribute to our understanding. In perhaps the most arresting image of all, still more so than the movement choir’s gang-rape of Malinche, Montezuma gives birth, we presume to Cortez’s child: the offspring is the offspring of Apple. fettFilm’s video images plunge us into a world of projected ‘apps’ and video games: Cortez’s war is virtual – remember those television images of Baghdad, and so many other victims of Western imperialism – but the virtual appears to be real and, of course is. Both sides suffer; both sides die, kill each other, and yet appear still to be in some sense alive. What is going on? What has gone on? The information age threatens to disclose all, yet leaves us all the more alienated. Montezuma’s transformation into a statue – here, a marrying, apparently pacified doll – does nothing to resolve, everything disquietingly to disturb, as does the further violence that ensues. And yet opera, the primæval and/or modern cry, reassert themselves at the end of each part, with verse from Octavio Paz, a striking, harrowing duet for Montezuma and Cortez at the very close. Or is it? Rihm’s libretto ends: ‘Ende (?) der Oper’. Images from the (Spanish/Mexican) past have fleetingly passed before our eyes: are they a clarification, or a ‘dead end’? Log in, to find out? Or should we turn away from our screens? Perhaps to listen? 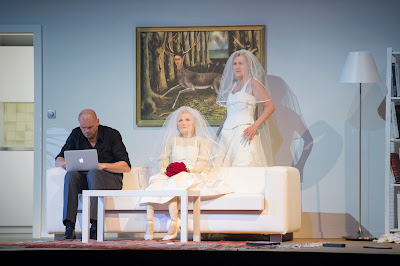 Performances, as I suggested, were uniformly excellent. Angela Denoke and Bo Skovhus offered near-superhuman efforts as Montezuma and Cortez, range as impressive in dynamic terms as in pitch, in stage presence and conviction as in musical and verbal delivery. Cortez, backed up by speakers, never elicited sympathy, but suggested a broadening of our experience and understanding. Montezuma, shadowed by spectacular high soprano and deep contralto (Susanna Andersson and Marie-Ange Todorovitch) was anything but a sentimentally conceived victim. We did not – and surely should not – know what to do with him/her, and in some sense (s)he survived. I should probably add: in another sense, sadly, not at all. The contrast with the trendy banalities of Peter Sellars’s The Indian Queen, loudly proclaiming itself post-colonial, whilst all the time forgetting the ‘post’ bit, could hardly have been greater. This approached Wagnerian music drama, not on Wagner’s terms, but not opposed to them either. And, as with Wagner, the orchestra was perhaps most crucial of all. There could certainly no be gainsaying the outstanding contribution made by the ORF Symphony Orchestra, Vienna, wisely, viscerally, reflectively directed by Ingo Metzmacher. Yes, this work needs to be seen – and heard – again.