At last, an opera company bothering, in London, to perform an opera by one of the most important composers in the history of the genre! (When the Royal Opera performed Orphée et Eurydice, it condescended to Gluck by hiving him off to an external orchestra, as if he somehow were not good enough for its own players.) One grows weary of lamenting, year after year, Gluck’s absence from our programmes. This performance at the Hackney Empire sold out, showing that there is a keen audience, both of devotees and newcomers; if Gluck is not programmed, just as when Schoenberg, say, is not programmed, it is because companies have decided not to do so, not because no one will go. It is all the better, then, that English Touring Opera will take the production to many theatres around the country that would otherwise receive no opera at all, let alone any Gluck operas. 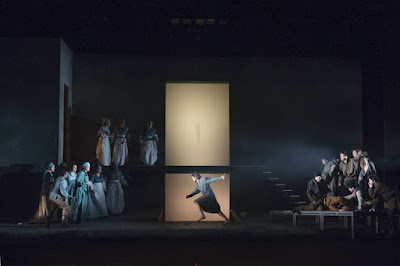 What most, me included, would consider the crowning masterpiece of Gluck’s career will win converts from any willing to treat opera as a serious art form; those who are not might as well remain in front of the television. For Johann Joachim Winckelmann, the great German art historian and archaeologist, ‘the only way for us to be great, and if at all possible, immortal,’ was ‘by imitating the ancients’. Such was the context for Gluck’s crystallisation of plans for operatic reform, opera, which should have been the inheritor of Attic tragedy, being seen instead to have degenerated into an undramatic farrago of vocal and scenic exhibitionism. (It is hard not to sympathise in the case of, say, Vivaldi’s operas, and many others.) Gluck’s (well, Ranieri de’ Calzabigi’s) 1769 Preface to Alceste remains a landmark document in operatic history, the archetypal declaration of operatic reform. It was very much what we heard here:

I have striven to restrict music to its true office of serving poetry by means of expression and by following the situations of the story, without interrupting the action or stifling it with a useless superfluity of ornaments; and I believe that it should do this in the same way as telling colours affect a correct and well-ordered drawing, by a well-assorted contrast of light and shade which serves to animate the figures without altering the contours. Thus I did not wish to arrest an actor in the greatest heat of dialogue in order to wait for a tiresome ritornello … nor to wait while the orchestra gives him time to recover his breath for a cadenza. … I have sought to abolish all the abuses against which good sense and reason have long cried out in vain. ... Furthermore, I believed that my greatest labour should be devoted to seeking a beautiful simplicity.


Moreover, it was what we saw too. James Conway’s production, focused on Anna Fleischle’s resourceful single set will doubtless transfer well to other, smaller theatres. It proves eminently adaptable, focusing our attention, like Gluck’s music, on the drama, not upon extraneous ‘effects’. That is not to say that there is anything bloodless to it. Quite the contrary, in fact, the blood-drenching of the opening scene, Iphigénie and her priestesses compelled to perform their appalling task, hits home powerfully, the well-nigh psychoanalytical quality of Gluck’s writing – storm external and internal – powerfully conveyed. Conway concentrates on the characters and their plight, permitting the drama to do its own work, or so it seems. One especially welcome aspect is his willingness to follow the homoeroticism of the relationship between Oreste and Pylade. (Quite why many other directors decline to do so remains a mystery to me.) Their second-act kiss is a splendidly handled moment. Have they (physically) been lovers all along? Perhaps, but I had the impression that, at this moment, facing death and the prospect of never seeing each other again, they could finally act as their romantic friendship had all along urged them. However difficult Oreste had become, perhaps even tried to be, they now found themselves helpless, compelled by Fate to snatch the moment. The openness of Conway’s staging allows one to read that moment as one will; there is no doubt, however, that this is the truest of love. Nothing, however, detracts from the playing out of the tragedy, Guy Hoare’s lighting clearly focusing our expectation and concentration.

An unfortunate exception came with the decision to present the deus ex machina in the guise of a little girl Diana, splashing around in the puddles. It makes for an undeniably arresting moment of theatre. Alas, its vocal effectiveness stood in inverse proportion to the element of visual surprise. Another aspect of vocal weakness came with Craig Smith’s stiff Thoas, king of Tauris. It is not the most grateful of roles, perhaps, but he sounded elderly rather than barbarous. Otherwise, there was much to admire in the cast. Catherine Carby’s gave a heartfelt performance as Iphigénie; how could one not deeply sympathise with her plight? Grant Doyle’s Oreste came across as properly conflicted, properly stunted by his appalling experiences, growing in humanity and self-knowledge. If John-Colyn Gyeantey’s Pylade was not always vocally secure, sometimes possessed of an unduly distracting vibrato, he had one believe in his character and his motivations, which is of greater importance; moreover, ‘Divinité des grandes âmes’ proved a proper climax to the third act. An excellent small chorus made its mark in various guises, as did those taking the smaller roles. 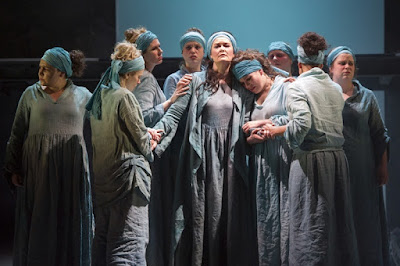 What a joy, moreover, to hear Gluck performed on modern instruments! If Martin André’s direction sometimes veered a little towards the frenetic for my taste, one hears far more extreme examples. Rarely did the instruments sound circumscribed, even if a little warmer string tone would not have gone amiss at times. More importantly, though, the bubbling of this well-nigh proto-Wagnerian (and proto-Berliozian) wordless Chorus told us so much of what we needed to know, explained so much of what we saw on stage and heard in the vocal line. Continuity and variety were impressive, André ensuring that both emerged as sides of the same dramatic coin. This was not a performance on the grand scale of, say, Riccardo Muti’s legendary recording from La Scala, but one would not have expected it to be. ETO does in many respects a far more important job, for which we should all offer thanks. There could be no doubt that it gave us the opportunity to hear just what Louis Petit de Bachaumont wrote of, in the account he gave in his Mémoires secrets of the 1779 premiere:

It is a new genre. It is truly a tragedy, … a tragedy in the Greek style. There is no Overture, … no arias [an exaggeration, but one knows what he means!]; but many indications of passion expressed with the greatest energy; they arouse an interest hitherto unknown on the lyric stage. One can only congratulate Chevalier Gluck for having discovered the secret of the ancients, and he will raise it to a pitch of undoubted perfection.