Baroque opera has long been an important part of the Bavarian State Opera’s programming. And beyond the company itself, Munich’s tradition stretches back many years indeed: Kubelík’s Handel with the Bavarian Radio Symphony Orchestra, for instance. Yet, whilst there has been much Handel, Monteverdi, Cavalli, et al., in recent years, the French Baroque in general and Rameau’s music in particular seem to have been a closed book – as so often in the world outside France. Let us leave aside for the moment debates concerning whether ‘Baroque’ should be a suitable designation, merely noting that Rameau’s music seems to have provoked the word’s first artistic usage. An anonymous letter to the Mercure de France, occasioned by the 1733 Paris premiere of the composer’s first opera, Hippolyte et Aricie, printed in the Mercure de France, dismissed the opera’s novelty as ‘du barocque’; its melody was incoherent, its harmony unduly dissonant, and its metre chaotic.

That was certainly not how Rameau sounded on this occasion, quite the contrary. Indeed, I should not have minded a little more truculence – if not incoherence! – from Ivor Bolton’s conducting. Its fluency was admirable, but I could not help notice – and, at times, become a little tired by – a tendency remarked upon by a friend beforehand: namely the conductor’s penchant for turning everything into a dance. There is much dance music, of course, in this opéra-ballet, but that is not to say that everything must be. I know that many ‘authenticke’ musicians will argue to the contrary, even, God help us, in Gluck and Mozart, but the declamatory French of Rameau’s recitatives – here, admirably, indeed often thrillingly, supported by a continuo group involving Luke Green (harpsichord), Fred Jacobs and Michael Fremiuth (theorbo), and Werner Matzke (cello) – is not necessarily to be confined to them. The ravishing airs, duets, and above all, ensembles, would have benefited, at least to my ears, from greater – dare I say, quoting the writer to the Mercure de France, more ‘chaotic’? – variation. 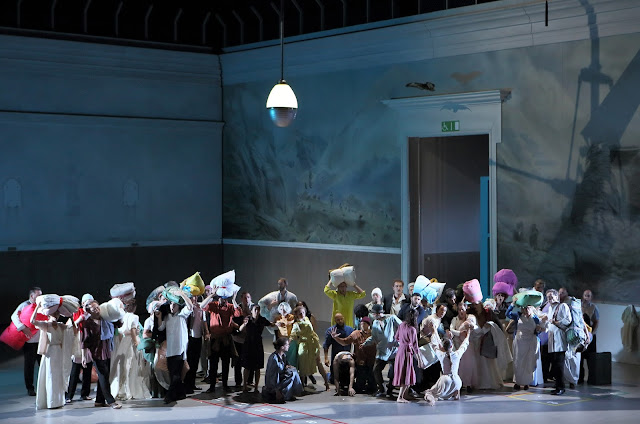 That said, and that said perhaps at too great a length, there was otherwise much to relish from the Munich Festival Orchestra. Even I did not find myself missing modern instruments. (This is, I learned afterwards, the Dresden Festival Orchestra on location.) Indeed, the woodwind in particular very much offered their own, splendidly Gallic justification. Moreover, strings (twelve violins, five violas, seven cellos, two bass viols, one violone) were certainly not parsimonious with their vibrato, quite from it; this was an enlightened as well as an Enlightened performance from all concerned. Rameau’s love of orchestral sound, its implications for Gluck and, via him, for Mozart too (think of Idomeneo!) was vividly and, above all, dramatically, communicated.

Sidi Larbi Cherkaoui’s direction, choreography included, treads a judicious line between various competing elements. If I were a little surprised that Munich chose this Rameau work as its first – for me, a tragédie lyrique, such as Hippolyte, would have been a more obviously compelling choice – then the voguish (for the 1730s, that is!) amalgam of opera and ballet offered opportunities to ravish other of the senses too. Cherkaoui’s dancers never disappointed, their movements – do these people have no bones in their bodies? – not merely responsive to the music, to the drama, but intensifying its possibilities, above all visual-dramatic tension at points of decision. If one wished to visualise a Rameau flute line, for instance, one could have done far worse than watch the movement on stage.

Without pressing his point too far, Cherkaoui probes what might hold this prologue and four entrées – as in Rameau’s definitive version – together. Opening in a classroom, the teacher, Hébé, leading her children in conjugation of French verbs, the unified drama takes them – and us – on a tour of different civilisations, and shows them, not the war personified by Bellone, often to have as much to teach us as we have to teach them. That is not to say that Rameau’s work, still less Louis Fuzelier’s libretto, can or should be understood in twenty-first century terms; however, its ambiguity, its insistence upon asking ‘who actually is the barbarian here?’ reminds us that we – and, looking at the world around us, how could we doubt this? – have no monopoly on multicultural virtue.

Yet there are differences too. The homosexual love denied by the Incan Huescar (here in European clerical carb) in Cherbaouki’s funeral-turned-wedding setting for the second entrée also finds its fulfilment; L’Amour, for us today, does not discriminate, heterosexual and homosexual love are, ultimately, after a struggle, equally valued. Moreover, for an English visitor, more than unusually embarrassed by his nationality at the moment, Munich’s ecumenism offered hope that Europe and indeed the world beyond it will survive. National flags, favoured by Bellone and a visiting American President, are not banished, but there is a vision of something greater to be glimpsed, in the European flags – and, indeed, in the exquisite blue and yellow of many of the children’s outfits. (The Kinderstaterie of the Bavarian State Opera were well trained and delightful in their roles.) And so, the young men who forsake Hébé and Europe for the ‘Indies’ (an all-purpose, ‘exotic’ Orientalism or Occidentalism!), learn through experience that conflict is not the way to prosper; the realisation of the peace-pipe ceremony at the close strikingly fulfils the work’s strikingly internationalist sentiment, dancers and vocalists as one.

The singing was, without exception, wonderful. Words were as clear as Rameau’s lines, whether in solo, duet, ensemble, or choral numbers. The Balthasar-Neumann Chor was certainly not the least impressive aspect of the performance. Lisette Oropesa and Ana Quintans set the scene splendidly in the Prologue, Hébé and L’Amour carefully differentiated, with Goran Jurić a strikingly successful general-in-drag. Tareq Nazmi’s sensitive bass offered wisdom and humanity; Cherbaouki’s skilful comparison between the roles of Osman and Ali was given sympathetic life, as were other such doublings of roles (more than mere doublings). Mathias Vidal and Anna Prohaska shone likewise as Carlos/Damon and Phani/Fatime. Both imparted depth in lightness, and lightness in depth, as graceful on stage as of voice. Cyril Auvity’s unerringly stylish tenor, François Lis’s deep yet never bluff bass, and Elsa Benoit’s sparkling yet variegated soprano offered other highlights; so too did the highly attractive chiaroscuro of John Moore’s baritone. Above all, there was a true sense of collaboration, rendering the performance as well as the work substantially more than the sum of its parts. As we once hoped – and perhaps may one day hope again – for a Europe too often divided, indeed torn apart, by Bellone…