‘This is the way the world ends. Not with a bang but a whimper.’ It is, perhaps, a line quoted too often; yet, even though it may not have been entirely accurate on this occasion, it came to my mind. Its accuracy might be questioned in several respects. Although the Bavarian State Opera eschewed Wagner’s Tristan-esque revision – rightly, in my view, that working better for Tannhäuser than The Flying Dutchman – this was not Götterdämmerung. Moreover, the end, as we experienced it, came more as silence and alienation than a whimper; close, then, but probably not quite the same. More important still, in retrospect – hindsight was inescapable on this particular occasion – the real catastrophe, or rather news of it, came after the end of the performance, the ‘real world’, as is far too often the case at the moment, offering the keenest of tragedy. So perhaps I should start again; I shall not, however, since I should like to start at the end, indeed feel compelled to do so, lest tales of Mrs Lincoln and her critique of the evening’s dramatic proceedings hover too close for comfort. For this was an evening – thank God – never to be repeated, one that even the most ambitious of stage directors would have struggled to envisage, let alone to create. Without in any sense wishing to minimise Peter Konwitschny’s achievement in this typically arresting, provocative, yet ultimately deeply, if not unrelievedly, sympathetic production, only Karlheinz Stockhausen, and before him Richard Wagner himself, might have come anywhere near this – and even then, not so very near.

The music stopped, then, just before the final bars; the lights fell. Silence fell too, the singers looking uneasily at each other: splendidly acted, I remember thinking. Then, following that caesura – inevitable memories of Konwitschny’s celebrated Meistersinger, even for those of us who only heard tell – we heard the final bars, albeit from what sounded like a distant, wind-up gramphone. I even wondered whether it might have been Konwitschny père’s recording, rendered more ancient, not that that matters. Redemption, then, was undercut not only by Wagner’s Tristan-less ending. (I am skating over the more complex issues of earlier versions, but that is not really the point here.) It was ironised – few directors manage to ironise Wagner successfully; Konwitschny does – by hearing it as something we all knew, all expected, were more or less hearing in our heads anyway, and yet then did not hear as we should. It was a little like King Marke’s appearance in Die Meistersinger: meaningful, consequential, a modernist rather than a post-modernist quotation.

Then we spilled out onto the Max-Joseph-Platz, quite unaware of Munich’s terrorist lockdown. My telephone had no reception; I could not contact a friend, to see whether he had been there or not. (It later transpired that he had not.) Many of my fellow opera-leavers seemed puzzled. We could not, for instance, enter a restaurant on the other side of the square; although a few people in there were eating, the doors were locked. Whilst trying to find out what was going on, I eventually received a call from my father, to check that I was safe; he began to explain, and armed police came into view. I learned after that those who were less quick on their feet than I had been were unable to leave the Nationaltheater for quite some time. I, however, had little choice but to try to walk back to where I was staying, armed police and other advisors pointing me and others first in one direction, then in another, often seeming to disagree with each other. Meanwhile, so far as I was aware – this was not the case, but it was what everyone seemed to think at the time – the U-Bahn was closed, since one of several gunmen (there was, of course, only one) had gone down there, armed. Walking past Odeonsplatz station was a little frightening, then; but it was the eeriness of the evacuated beer festival in the square – when I had walked to the opera, it had been full of beer, music, Dirndls, Lederhosen – that, if anything, chilled more. Having spoken to my brother too, I made it back to my host’s, who filled me in on events unfolded and unfolding – and immediately poured me a much-needed drink.

I learned much later that what I ‘should’ have seen and heard – Barry Millington had sent me his review of the production, but I had not read it at the time – was Senta, clearly furious with the Dutchman for not having trusted enough, setting one of the quayside barrels ablaze and mount her own act of terror. The explosion I ‘should’ have heard – unlike Wagner’s music, I did not know it – never came; darkness and alienation, nevertheless curiously, chillingly effective, did. No wonder so many onstage ‘acted’ confused; they had not, it seems, been acting at all. Presumably many had suspected a technical problem. The Bavarian State Opera had, it seems, decided to pull the explosion. For those in the know, was this perhaps a bit like ‘hearing’ Mahler’s missing third hammer-blow in the Sixth Symphony? (Thank goodness this was not a Mahler evening: that really would have been too much.) And so, the business of interpreting, reinterpreting, a particularised version of Konwitschny’s staging – never, let us hope, to be repeated – truly got under way; or at least it did in the odd couple of seconds between replying to anxious Facebook and Twitter messages from friends. (Why, they wondered, had I not replied? Most of them had no idea, of course, that I had been in the theatre for nearly two-and-a-half hours, without an interval.) I shall never forget the non-bang and the gramophone whimper, nor the further step our wretched world made towards Götterdämmerung. 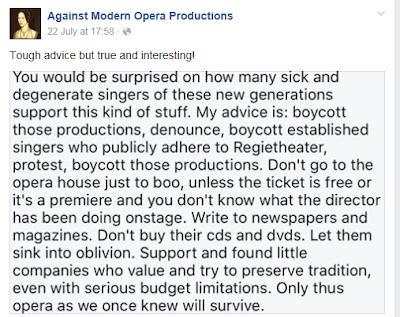 Let me turn, though, to what I had seen and heard before. My memory and my experience are doubtless coloured by the ‘other’ events of that night. Nevertheless, what I saw and heard was impressive indeed, on its own terms. Our friends at Against Modern Opera Productions – how chilling it was to see, that very night, them railing, as if Hitler had never fallen, against ‘degenerate’ artists – might even have liked, had they not seen the word ‘Konwitschny’, the realistic designs from Johannes Leiacker, with which the mise-en-scène opens. For it is a (German) Romantic, even Gothic landscape that provides the backdrop. Apart from anything else, this is a ghost story: every one of us, every society, is overwhelmed by ghosts from our pasts. So too, of course, is opera. Nevertheless, ships are definitely ships; the sea and sky are definitely the sea and sky. The Dutchman’s crew, moreover, are most definitely Golden Age Dutchmen. The painterliness is, in one sense at least, ironic. AMOP would not have ‘got’ that; representations and their deconstruction would have gone unnoticed, uncomprehended. They would surely, though, have noticed the heightened venality not only of Daland, but his crew too (modern Norwegians, but as yet, not with an overwhelming Wagnerian clash between ghostly visitors and the ‘present’). Daland’s pockets of a few golden chains; the Steersman crowns himself with a golden crown; the other lads eagerly join in the bonanza: there is much jewellery to be had from the new ship’s Cardillac-like cargo, unless, as one of Wagner’s less-eagerly acknowledged forebears might have advised him, ‘L’or est une chimère’. A chimera of another variety haunts the Dutchman: the Angel in white who visits the stage. This Dutchman is a man, with sexual fantasies of his own; they distract him, pave the way for tragedy; they lead us to the second act.

Our opera-as-Pegida acquaintances would certainly have started screaming degeneracy, at the deliberate scenic contrast when the curtain rose upon that act. This is a swish health club, in which the wheels that spin are those on the exercise bicycles. Mary leads the class, the girls engaged in the uneasy camaraderie and rivalry of the mindless heteronormative pursuit for an ‘ideal’ physical form to please ‘the’ men they have either hooked or would like to hook. (Or is it the other way round?) Spinning, one might say, takes more than one guise: old visiting new, new visiting old; connections abound. Senta does not fit in; she arrives late for the class, and is far more interested in her Romantic painting. Erik is a creepy yet impatient voyeur: no mere innocent he. Yet it is Senta’s disruptive presence, encouraged by the reappearing Angel, that ultimately, prophetically, proves the turning point. It sets in process the Brechtian – house lights on – lecture to the audience she and the Dutchman give at the close of the act. ‘Romantic love? Yeah, right…’ Everything, then, is set up to fail, as it increasingly does during the third act, modernity and caricatured Old Dutchmen engaging in violent combat, the past, as it so often is, victorious – not least because the present refuses to learn from it. And then – well, you have heard the rest. Explosion there comes – on this occasion, came there not.

The cast was distinguished. Catherine Naglestad trod to powerful, even searing effect the line between, on the one hand, twin incitement to Verfremdung and terror, and on the other, heartfelt, Romantic or neo-Romantic ‘feminine’ suffering. Her top notes – and not just her top notes – thrilled; we were reminded that the female redemption problematized by Konwitschny, by us more generally, is, not only in Wagner but in so much opera, often effected through vocal presence. Johan Reuter traced this complex Dutchman’s mood swings with great skill; we sympathised with, even followed, his distractions and his demons. Matti Salminen’s final Daland – so, at any rate, I was informed – was a bluff yet knowing performance, a fine tribute to a great artist. Wookyung Kim came close to stealing the show with his sensitively sung, far-from-pushover Erik. Okka von der Damerau imparted dramatic as well as ‘merely’ musical meaning to the role of Mary, and Dean Power proved as appealing and as intriguing a Steersman as I can recall having heard. Choral singing was wonderfully full-blooded too. All, then, engaged with Wagner’s work as living drama.

The Bavarian State Orchestra was, unsurprisingly, in its element here. Its playing encompassed all manner of shades from darkest, grimmest of musical tragedy to echoes of Mendelssohn and Weber, apparently – if only apparently – more blithe, even fairy-like. This was orchestral Wagner as outstanding as one might hear from Daniel Barenboim’s Staatskapelle Berlin. Asher Fisch might have benefited from a more Barenboim-like sense of the work’s melos; or at least he would have done for me, my preference being very much for a more ‘musico-dramatic’, less ‘number-opera’ approach to the work. The latter is, of course, perfectly justifiable in theory, but it tends, unless more strongly incorporated into a sense of an unbroken whole, to make parts of the work drag – especially when, as here, numbers such as Senta’s Ballad, are taken so slowly. Fisch undoubtedly knew what he was doing, though; he had me, on more than one occasion, rethink, rehear. The waltzing at the end of the first act – perfectly in keeping with fantasies venal and sexual, visually as well as musically realised – pointed far into the musico-dramatic future, to Strauss as well as to the integrative tendencies of later Wagner. The Flying Dutchman is in some ways the most difficult Wagner drama of all to bring off musically; no one would have been seriously disappointed, if at all, by this performance.


The rest was silence; until, that is, it became the noise of chaos.