The greatest of Gluck’s operas? Certainly. The greatest opera between Monteverdi and Mozart? Quite probably (give or take a Dido and Aeneas). Iphigénie en Tauride remains an incredible experience. I say ‘incredible’, since one never quite believes it – or at least I never quite do – from the previous encounter, until acquaintance shows that one’s memory was not playing tricks. For, as Raymond Leppard put it, whilst at work on Orfeo ed Euridice, not a bad opera itself: ‘The odd thing about Gluck is that you look at the music, and for a moment you feel that Handel was right and that he is rather a poor composer, in technique rather inadequate, but then with his flair for the theatre, you see what is behind the notes. I have never heard an instrumental piece of Gluck that I wanted to hear again, but when the big emotional moments come in his operas, they must be played for all they are worth. It all works in the theatre.’ One need not necessarily subscribe to every word of Leppard’s claim to know its essential theatrical truth. Gluck shows us, and this must surely be what so attracted Wagner to his works, that intellect and emotion, words (is this, perhaps the best of his libretti too?) and music, dramatic truth and theatrical imagination are not antithetical. Their relations are (differently) dialectical; they thrive on each other. 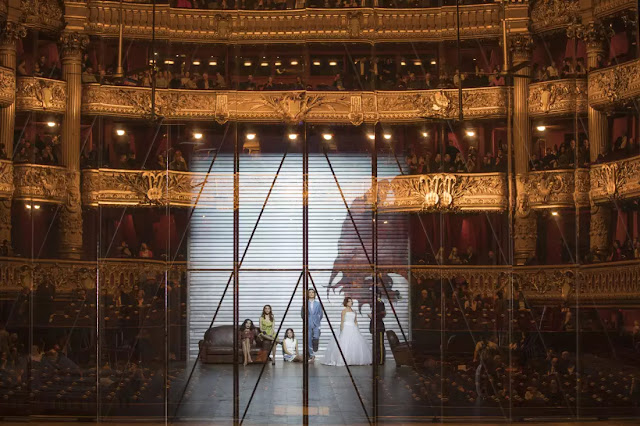 Barrie Kosky’s Berlin production (in German) was the first I saw. It packed quite a punch, and memories still do. Krzysztof Warlikowski’s Paris staging, first seen in 2006, is more complicated, more multivalent, yet just as powerful. It concerns itself not just with war – Abu Ghraib was very much Kosky’s name of the game – and its equally horrific aftermath, but specifically with women and war. Warlikowski does it with mirrors, a hall of mirrors if you like. Versailles of course did and does – and we are reminded of the dedication to Marie Antoinette as the Overture gets under way. (Yes, the opera was premiered in Paris, but the Queen was naturally in attendance.) Before that, though, as we have taken our place in the theatre, we have been confronted with glass, reflection (in more than one sense) of and on our place in the gilded Palais Garnier, and mysterious glimpses of what might be going on behind the glass. Theatre is a place of reflection and refraction, of truth and illusion, of seeing and indeed of failing to see (ditto listening). Women – old women – stride back and forth, from back to front of stage. They are confident, afraid, lost, found: they are, we discover, at a retirement home. Greek women need to remember, to be remembered, just as much as Trojan Women. 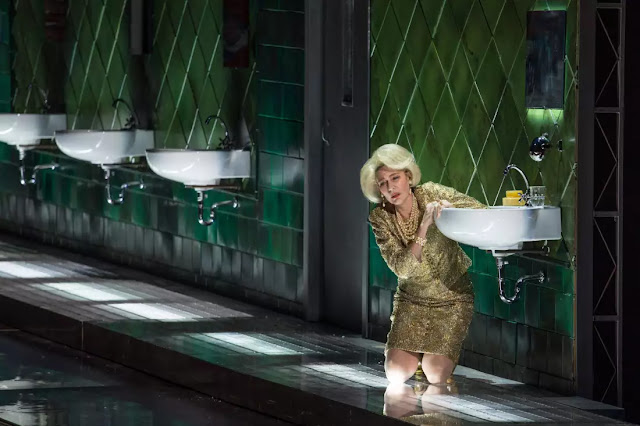 The elderly Iphigénie implores the gods for assistance. ‘Grands Dieux! soyez-nous secourables!’ She relives, with all the psychoanalytical brilliance of Gluck’s – and Nicolas-François Guillard’s – fusion of outward and inward storm what took place, and we realise that what she now seeks is an end to it all. That trauma has never left her; although she still dresses, not unlike a Dallas matriarch, to the nines, she is broken inside, condemned to relive those horrors of war, of sacrifice, of family. The woes of the House of Atreus were not concluded finished with Elektra. And so, amongst the annoyance, the viciousness, the touching moments of care, within her home, she prepares for the end, and achieves it. Mirrored action looks back, looks forward. Where are we? Back on Tauris? Or at the proud old woman’s obsequies, a royal funeral? Or are we still at the home, day in, day out, wishing, like her, to escape, almost anywhere, any time?

The world of dreams, of hidden familial desire is strongly present. A younger Oreste, starved yet beautiful, dreams of, creates his mother, possesses her, feeds from her breast, kills her. He loves Pylade, as strongly as anyone has loved anyone on stage: here, we feel, are the origins of Tristan and Kurwenal. And he loves, possesses Iphigénie too. Forbidden love was imagined, experienced, remembered in three guises: yet the hero then lived, almost Siegfried-like, in the moment. When he and his equally beautiful, all-too-perfect royal family, chiselled cheekbones, exquisite dress, and all, come to mourn the death of his sister, they seem almost as if they are the ones who have died, or perhaps never even lived. Embalmed, they keep it together for almost as long as they need, before the King’s children succumb to their forbidden desire – for each other. 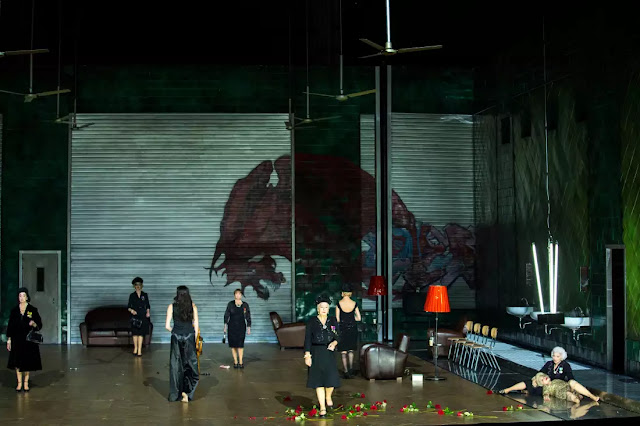 Two stages of future, then, neither of them good, frame the ‘actual’ action. It is not, in any banal way, ‘explained’ by the rest, but we make our own connections, we question, we recoil in horror, not least when those nagging orchestral figures – that celebrated Gluckian syncopation, for instance – prey upon our, their, raw emotions. Mystery, however, remains. The Scythians are certainly ‘other’, their rites not ‘ours’, but perhaps they are truer, less preoccupied, less weighed down by pasts and futures experienced or imagined. The first-act ballet exhilarates: not only do we come close to witnessing a rite we cannot understand, but we see one of Iphigénie’s elderly companions at its centre, a proud woman, undaunted, at least momentarily, by age, confident in her sexuality, in her dance. Or is it a throwback to Tauris, even a response to an old woman’s medication?

The cast was excellent, its silent members too. None of that would have been remotely possible without them. So often, French opera is plagued by an inability to sing in French: not just the language, but the style too. Such was never a question here. Véronique Gens drew one in, made us her confidants, never needing to raise her voice, although occasionally she could – and did – expand her dynamic range. Hers was a subtle, unfailingly alert performance in which all dramatic elements, just as Gluck requires, seemed to be at one. Her alter ego, Renate Jett, complemented, contrasted to powerful effect indeed. Étienne Dupuis, as (the sung) Oreste, for so long (seemingly literally) blinded by his past, rose to dramatic heights as his character progressed (and regressed). Stanislas de Barbeyrac’s Pylade was one of the most moving portrayals I have heard on stage for some time: unflinchingly honest, heart-rendingly beautiful of tone, the two qualities intertwined as if the souls of Oreste and Pylade themselves. ‘Smaller’ roles were all well taken. 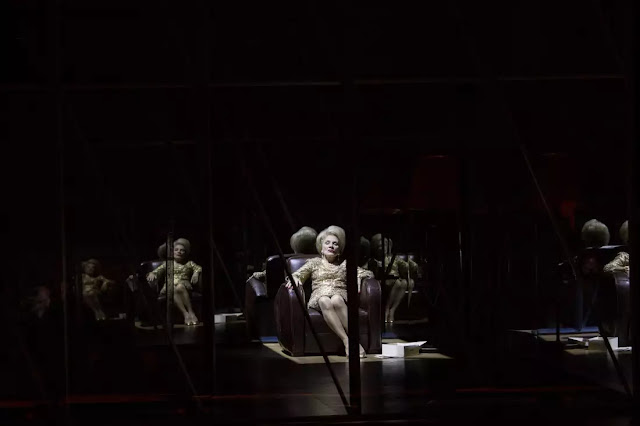 Choral singing was impressive throughout, although, just sometimes, I longed for something a little more forthright. There is no room for crudity in Gluck, of course, but this should be visceral drama. (Perhaps, though, that was more a reflection, as it were, of the chorus rarely being seen on stage. Psychoanalytical approaches have their snares, practical as well as theoretical.) My only disappointment was with the somewhat lacklustre conducting of Bertrand de Billy. It was not bad, and indeed, once past a rushed Overture, was generally well paced. One rarely, however, had the sense of this musical drama – even music drama? – being lived, let alone lived as if there were no tomorrow, which, for Iphigénie, was here a thought very much of the essence. As ever, though, the Opéra’s orchestra was on fine form, euphonious to a degree. All we needed was a Riccardo Muti to stir them up…

One thing we did know, however (at least those who did not partake in philistine booing at the close): Iphigénie had seen – and heard – it all. We shall have our own particularly strong associations, whether operatically – Nono’s Algran sole carico d’amore, Stefan Herheim’s Götz Friedrich post-Second World War hommage in that legendary Bayreuth Parsifal, etc. – or from history and the world around us (where to start?) Warlikowski and a tremendous cast, allow her, allowed the scorned victims of war – women, men who love men, ‘foreigners’ – to speak, to sing, to remember, and to be remembered.