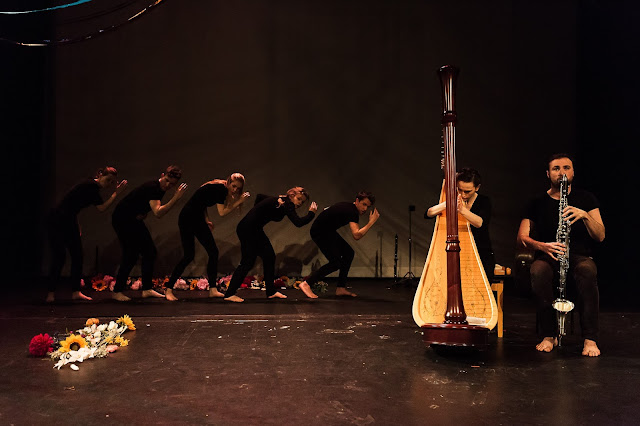 Much of the most interesting art of our time seems to ask questions of us rather than to answer them. Sociologically, there are doubtless many reasons for that, many of them blindingly obvious if we pause to consider the world around us. (And who amongst us is not doing that at the moment?!) That is certainly my experience of most recent worthwhile opera (theatre, more broadly) staging. Our lot, whether we like it or no, is metatheatrical, and a good deal of other meta-things too. On the whole, I like it; I certainly value it.


In that spirit, this new ‘musical reimagining’ of The Winter’s Tale from The Hermes Experiment asked questions of itself and of us, not least concerning genre. I had been expecting an opera of some sort; that was certainly not what I got. We heard an hour’s worth of Shakespeare’s text, very well delivered, well acted too, with music. Rarely were words and music opposed, although sometimes they were. There were elements of song, but more often, boundaries between words, music, and gesture (I always seem to fall back upon Wagner at some point), between actors and musicians, between most components present or believed to be present, were questioned, blurred, negated, perhaps even, dare I suggest it, transcended.


Adaptations have long been part of Shakespearean reception; there would be little reception to speak of without them. Garrick’s Florizel and Perdita is an obvious example here; (semi-)opera-lovers will immediately think of Purcell’s Fairy Queen. There was no pastoral, but so what? No one was claiming this to be a performance of the ‘original’; insofar as I thought of what this ‘was’, or perhaps better of where I might locate it, somewhere between a version with incidental music and a (mostly spoken) cantata-cum-music-theatre-piece might have come closer than many attempts. But I did not really spend my time trying to locate what I saw and heard. I took it, I hope, for what it was, and enjoyed it, my Shakespearean appetite whetted rather than sated. When contrasted with the bizarre Glyndebourne-Royal Opera House Macbeth opera, I know which I found more involving, by a country mile.

Kim Ashton’s name was given as composer, but not in the traditional top billing, for this seems to have been a genuinely collaborative effort. I was put in mind of Schoenberg’s futuristic vision of studios at musical work: ironic, given his emphatic self-understanding – ours too, surely – as Teutonic, Romantic ‘genius’. Here, however, there was nothing ironic, nor falsely modest. As Ashton himself explained in the programme, ‘My position as ‘composer’ of the piece is precarious: while my name appears at the top of the score (a compilation of instructions, including only sparse musical notes), the music is as much by The Hermes Experiment as it is by me, since most of what you will hear is being improvised live, according to musical shapes and behaviours agreed in advance.’ That would only work, at least in the sense that it did here, with excellent preparation, for which director, Nina Brazier should, I presume take a good deal of credit too, likewise everyone else involved.

For instance, again to quote Ashton, ‘The “folk song”,’ which certainly had that air, ‘in the second half is a case in point – particularly since it is the first tonal piece I have ‘composed’ in about 15 years!’ (As Schoenberg admitted, there were still good tunes to be written in C major, although this was not, if I remember correctly, in C.) ‘When someone suggested that a folk song would suit one scene well, the soprano Héloïse [Werner] sketched out its opening melody; I then fleshed this out into a rough whole; finally Héloïse, Anne [Denholm] (who plays it later on the Harp) and I all tweaked it here and there until I no longer remember who was originally responsible for which note.’ The darkness of the bass clarinet and its interjections made their points, not necessarily translatable into words; so too, did the harmonic – and melodic – resonances of the double bass.

Similarly, actors came close to music – do they not always, in Shakespeare? – and in some cases, definitely crossed any such a boundary. The inability to handle Shakespeare’s verse – there are many ways, of course, but there are also failures – is the bane of many a contemporary Shakespeare performance. Not here, for all conveyed both its beauty and its meaning, Robert Willoughby perhaps my favourite in the former respect. William McGeough offered a subtle portrait of wounded masculinity as Leontes, Sadie Parsons an intriguing voice (Hermione) whom we wanted to believe, and whom we knew we were correct to believe, but who could yet sow some of that doubt experienced by Leontes. I could go on, but it was a company effort, symbolised perhaps, by Héloïse Werner’s wordless soprano – a voice from beyond in more than one sense, I think – becoming Perdita. Likewise, instrumentalists (the other members of the Hermes Experiment all outstanding) were called on not only to employ extended techniques but also, music-theatre-style, to participate in the ‘dramatic’ action.

There was, then, a particular, one-off sense of enchantment to the night’s proceedings. I shall not say ‘more, please’, since that would seem rather against the spirit of what was seen and heard; I was, though, delighted to have been there.