Breughelland is never far away. It certainly was not in the 1970s, when Ligeti composed the first version of his opera. For many of us, though, it has rarely felt closer, or at least not for a long time. A friend, Antonio Orlando, whom I met in the interval, mentioned the BBC film Threads, and we shared our experiences of something which, seen at our respective schools, changed us forever. Seeing it in the early 1990s, nuclear war became a far more terrifying, far more real prospect, even though its likelihood may well have been receding. It felt all the closer to home to this South Yorkshire schoolboy, since its harrowing portrayal of nuclear holocaust was set in Sheffield, amongst buildings – and their rubble – which he knew rather well: for instance, the ‘Egg Box’ Town Hall extension, which, I now learn, has long since been torn down in a typically English fit of anti-modernist philistinism. Now the United Kingdom has its first Prime Minister to have declared openly that she would use nuclear weapons, and the world – well, the world has Donald Trump.


Such thoughts would seem, not unreasonably, to have been on Peter Sellars’s mind when coming up with his concert staging of Le grand macabre. What we lose in sheer madcap surrealism – highly relatively speaking – we gain in contemporary immediacy: swings and roundabouts. In any case, there is nothing more blackly surreal than the mad idea of MAD (Mutually Assured Destruction), which one still hears from time to time from Internet and, alas, real-life sociopaths such as [complete according to political taste]. And so, the first two scenes take place at a nuclear conference in London and Berlin (the two venues of staging); having it relate to ‘clean’ nuclear energy brings a frightening, post-Chernobyl, pre-Hinkley Point C twist of its own. If the world, that of Breughelland and our own, needs an Angela Merkel, she is not even slightly evident here, as we flounder and err in identifiably post-Dr Strangelove territory. Excellent video imagery from Nick Hillel portrays the self-congratulatory world of our political leaders, plots the history of nuclear testing and worse, closes in on the devastation of the post-apocalypse. The congress of Astradamors and Mescalina takes place entirely online, despite their seating next to each other (very much of our virtual age). We make connections as we will, each of us different, but there is much to set our teeth into. I was less sure about the separation of Amando and Amanda, but perhaps I was missing something.

At the heart, of course, is the LSO, on world-class form here under its Music Director Designate, Simon Rattle. Whatever the vagaries of many of Rattle’s recent performances of Classical and Romantic repertoire, he has always been in his element in complex modernist and contemporary scores. So it was here, his orchestra-to-be fearless in its precision, sardonic in its wit, and not without tenderness when suggested (although how seriously should one take it?) Excellent though the ENO performance I saw and heard seven years ago may have been, this seemed to me in quite a different league. (Perhaps it was just a matter of my greater receptivity; my memory is not so sharp to be able to know for certain.) The orchestra, with a nod to music theatre, is dressed so as to suggest that its members are conference delegates. Its role as commentator, even as satirical Greek Chorus, is thereby heightened, whilst that of the actual chorus, joining us in the hall itself rather than on the stage, has us identify with its plight – just, one might say, as in Threads. 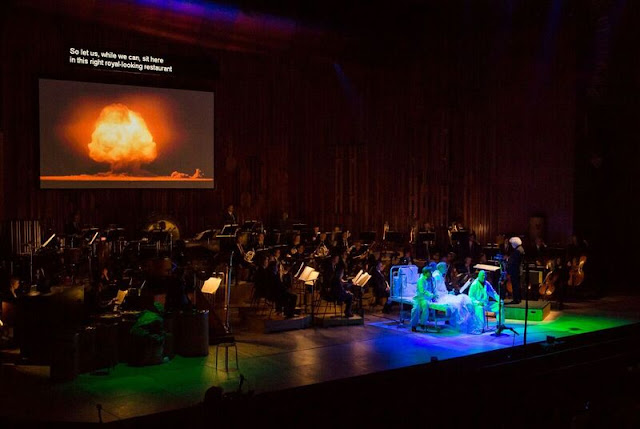 And at the heart of that heart, as it were, is Ligeti’s extraordinary score. Not unlike the brutalism of the surrounding Barbican Estate, which seems to become the more magnificent as it ages, or, if one will, is classicised, the music’s contemporaneous inventiveness becomes, like that of a reborn Haydn, all the more revealing upon closer acquaintance. This felt like a masterclass in informing us that the late 70s and early 80s saw the flourishing of all forms of resistance to neo-liberalism as well as the tightening of its iron grip from which we, frightened as well as hopeful, are only just beginning to liberate ourselves. A combination of instruments here, a turn of phrase there, a suggestion concerning what might be absent as well as what might be present: all these and so much more create allusions to a whole history not just of opera (Monteverdi onwards) but symphonic and other music(s) too. Ligetian parody, for instance in the ‘Collage’ with which Nekrotzar (The Donald? Or the force behind him? Or is that to look for the Wizard of Oz?) makes his entry, has a heart and a musical impetus of its own. There, the Eroica bass line’s treatment subverts a Beethovenian message that perhaps can no longer be ours, much as we need it; yet, at the same time, the dancing upon its ruins, the effort once again to construct, perhaps offers the hope of renascent humanity. And yet, the brilliantly hollow ‘moral’ – surely a homage to Don Giovanni and The Rake’s Progress – ensures that the Ligeti whose family had been lost in Auschwitz or, in his mother’s case, had survived it, has the last and darkest laugh of all.

To praise thosee vocal performances deserving of praise would be to write out once again the cast list – not, of course, to forget the outstanding London Symphony Chorus. Peter Hoare’s abilities as singer and actor proved triumphant once again, as Piet the Pot. Whatever my doubts concerning Sellars’s portrayal of them, the duo of Elizabeth Watts and Ronnita Miller made for formidable music-making, their voices contrasted in colour yet more than capable of blend. Pavlo Hunka’s Nekrotzar was blackly bureaucratic, if that makes any sense (one might perhaps ask that of the opera itself in similar vein!) There was something that seemed both to go to the heart of the character, and yet also to show that there is no heart – and not only in a sentimental sense. Audrey Luna’s coloratura proved properly stage-stopping. I was also very much taken with the depth of tone and sheer sassiness of character to Heidi Melton’s Mescalina. Peter Tantsists, as the White Minister, revealed a finely honed tenor new to me; I hope to hear more. Last but certainly not least, Anthony Roth Costanza’s Prince Go-Go proved almost painfully beautiful of counter-tenor tone, the unearthliness tempered from time to time by something suggestive of more temporal (quite appropriately) concerns. If ever, though, a cast, indeed a performance and a production too, were more than the sum of its parts, it would be this. Shall we now enjoy the end times?