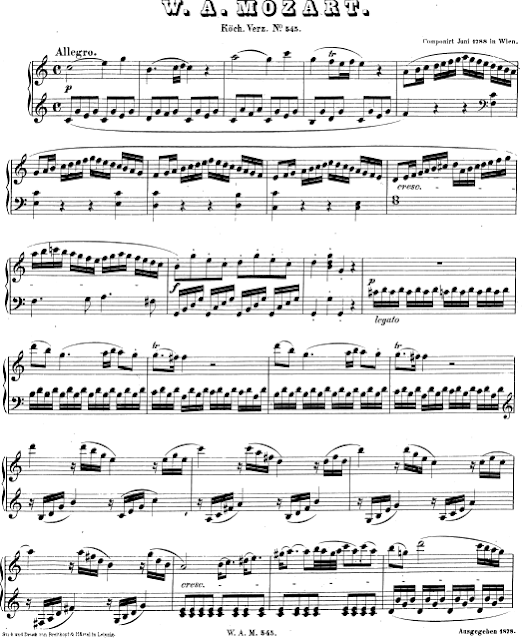 In a well-nigh perfect performance of Mozart’s ‘sonata for beginners’ – how treacherous that claim! – Mitsuko Uchida gave the impression and not far, I think, from the reality of utter effacement of the self. This was not anonymity, yet the sense, however illusory, of unmediated access to the work ‘itself’ could rarely have been felt more strongly. Come scritto, certainly; but not just as written, as we know it in the concert hall, or the parlour, of our imagination. The first movement’s passage work was second to none, articulation not only true, but a true joy. (How I wished my schoolboy left hand had permitted me to play a single bar, let alone a single phrase, like that. Not that my right hand had come so much closer…) ‘Just’ scales for so much of the development: not at all? The subdominant surprise in the recapitulation registered with subtle strength, preparing the way for Mozart’s concomitantly surprising path back ‘home’. The second movement offered similar virtues. Its transparency is cruel, even by Mozart’s standards, yet that posed, so it seemed, Uchida no difficulty whatsoever. The music flowed beautifully, its legato ‘like oil’. And how a chromatic note made all the difference in the world: so much from what might have looked so little! The turn to the minor mode evinced no exaggeration, but any degree of honest, even heart-rending drama. Uchida resisted the common impulse to rush the finale, which received a reading full of charm, delight, and yes, again, subtlety. Childlike? Perhaps, but certainly never childish. Mozart’s – Uchida’s too? – second naïveté worked its magic nevertheless.


The rest of the programme was devoted to Schumann. First came Kreisleriana. The opening piece benefited from admirable clarity. Perhaps it might have had a little more of the tempest to it, a little more flexibility too; nevertheless, the clearing of the skies still registered – again magically. I found myself comparing the difference in Mozart’s and Schumann’s use of arpeggios: not as some abstract distraction from the ‘poetry’, but by putting technical means at the heart of that poetry. There was greater flexibility in the second movement and thereafter, its intermezzi contrasting and responding to the opening material in a finely traced musical arc, as etched by Uchida (and Schumann!) Brahmsian compositional technique seemed unusually apparent in many of these movements, yet quite without Brahms’s ‘lateness’. Here was an earlier Romanticism, and rightly so. A little untidiness in the third and seventh was ultimately of little import; if anything, it reminded us that this music is not supposed to be easy to play (not, I hasten to add, that technique should ever be belittled.) The poise and dignity Uchida showed in the fourth, the whimsy that yet spoke of something darker in the fifth, and the ambiguity of the lullaby, intensified by the intrusion of contrasting material, in the sixth: all were movingly, perceptively portrayed. So too was the concluding movement, here sounding very much as in Harriet Smith’s programme note description: ‘less like the end … than the quiet closing of that door, the illicit listener tiptoeing away.’


The C major Fantasie followed the interval. Uchida’s first movement opened magisterially – a word overused, but not, I think, inappropriate here – yet capable of yielding. One always ‘knows’ that this is one of Schumann’s greatest works; here one undoubtedly felt it too, not least through the ongoing sense of perpetual development: ‘developing variation’, as any Schoenbergian would tell you. Here, comparisons with Liszt’s B minor Sonata seemed fully apposite. So did Schumann’s marking: ‘Durchaus phantastisch und leidenschaftlich vorzutragen’. Originality and eloquence were to be heard equally in all three movements: work and performance. The second had a fine, almost Elgarian swagger to its opening. It was questioned thereafter, again not unlike Elgar, although it was Chopin who came to mind in the serenity with which ensuing contrast was sung, likewise in the flickering, even dissolving, tendencies of Uchida’s left hand. Out of that extraordinary march emerged mystery and clarity in equal measure, in contest and collaboration. The quiet dignity with which the musical narrative was constructed, or perhaps better, constructed itself, brought an intriguing combination of methods with roots in both Chopin and late Beethoven. As for the Innigkeit heard and felt: that was entirely Schumann’s own. So were the paths down which the musical journey led us and its conclusion: they could hardly have been envisaged, let alone navigated, by anyone else. Uchida reminded us keenly of that ineffable individuality.


In a similarly exquisite fusion of process and poetry, she did that too in an encore of breathtaking delicacy and unerring direction. I guessed (correctly) that it had been by Kurtág. Only this morning did I find out which piece: Play with Infinity. Quite.