New work is the lifeblood of any opera company, any orchestra, any theatre, any artistic institution worth its salt. We all love what Pierre Boulez called the Museum; perhaps we love it too much. That is not going to change. There is, though, nothing unhealthier than a reverence for the past – or rather for a ‘traditionalist’ recreation of a past that never was – which excludes enthusiasm for the present. We shall make mistakes in the present; no sane person would ever deny that. Whilst there is every reason to try to minimise them, we should never do so with over-zealous caution. We certainly should not replace them with nth revivals of some hideous – or even non-hideous – ‘revival’ of La traviata. Apart from being wrong in itself, it would kill so many of the achievements of the present and future it is our duty to nurture.


One such is Ryan Wigglesworth’s new opera, The Winter’s Tale, here receiving its world premiere. How will it fare in the future? Who knows? That is not our concern. What I can say is that it emerged on its first night as a highly accomplished operatic debut, given splendid advocacy from all concerned with its production and performance. A more detailed analysis, of whatever variety, must await proper study of the score (for which, many thanks to ENO and Schott!) Wigglesworth paces the action very well, though, and his own adaptation of Shakespeare for the libretto works equally well. Indeed, I find its focus upon the action – something mentioned by director Rory Kinnear in a programme article, suggesting a strong, deep collaboration, of which there is evidence in abundance – especially well suited to a reworking of the tale as opera. Having recently examined a fine doctoral thesis on modern Shakespearean opera and Tippett’s The Knot Garden, I hope that this new instalment will, in the best sense, extend and even challenge some of its discussion, as any new contribution should. One of the potential problems of Shakespearean opera, as well as the oft-mentioned inherent musicality of the words as they stand, seems to me (as I had actually been discussing with a friend the previous evening) the complexity of the plot or, better, the number of sub-plots. There is, for instance, no Autolycus; we can probably all live, for one evening at least, without his snapping up of unconsidered trifles. Here, the narrative assumes an almost Attic tragic inevitability – there is some of that in the play, of course, but it is, fascinatingly, one of several competing tendencies there – which has long, with good reason, been thought conducive to successful opera. (Cue Straussian cries of ‘Agamemnon’ in your head.) 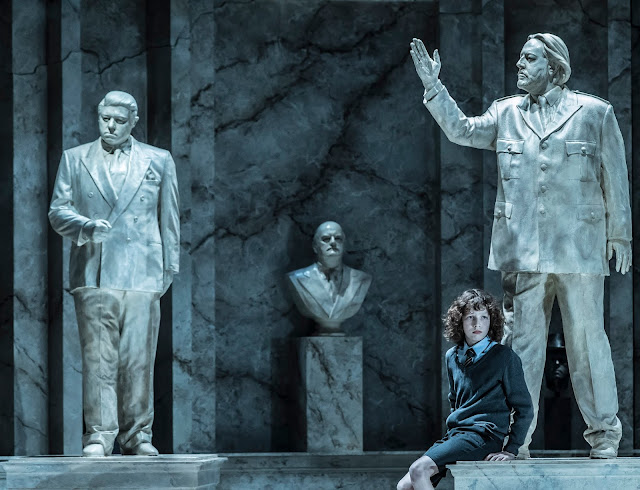 It is difficult and, I am sure, undesirable, to try to separate Kinnear’s staging, or indeed the cast’s performances from that. (Is not such unity of dramatic purpose what opera is supposed to be about? Yes, we can deconstruct it and often should, but deconstruction implies construction in the first place. And yes, it is perfectly possible for different aspects to be saying or doing different things at the same time, but again, usually in the service of a greater whole, however fragmented it might be in (modernistic) practice.) For instance, whereas the jealousy of Leontes can sometimes seem unmotivated, or at least abrupt, here the tyrannical tendencies of the king and their close alliance to his suspicions are reinforced scenically, musically, and performatively. Iain Paterson’s portrayal of his changing moods (redemptive transformation in the third of the three acts included) was imbued with the confidence suggested by a role he might have been singing all his life. Sophie Bevan’s not entirely dissimilar journey, from the lightness of a woman undeniably attracted to Polinexes, through savagely wronged consort, to miraculously transfigured voice as statue come-to-life at the close, brought emotional weight and dramatic credibility to Hermione. Polinexes, in the excellent hands and voice of Leigh Melrose, offered another, equally crucial tragic strand. Binding these strands together, nascent yet also fully formed in the first act, is Kinnear’s production – not only his first of opera, but his first in the theatre at all – provides a crucial politico-military setting (Moritz Junge’s costumes here crucial too), statues already representative of power, might, and all manner of repression; it also provides space for these characters to work out their fates.

Wigglesworth’s score – his conducting too, no doubt – binds this dramatic opening still more closely together. Structurally, it made excellent sense even on a first hearing (as I said, detail will have to come later, once I have studied the score); there are none of the formal deficiencies that so bedevil, say, much of Britten’s excessively lauded writing (The Turn of the Screw perennially excepted). What Britten could do – indeed seemingly could not fail to do – was set English words; so can Wigglesworth, albeit without the preciousness. Vocal lines move between arioso and, for instance, in the case of almost Hans Sachs-like depression for Leontes, something approaching a more traditional aria. But much of the real action is in the orchestra. Here, I think we hear Wigglesworth’s finest achievement: he knows what the orchestra can, even should, do in opera – and does it. Interludes play a dramatic role, just as they might in exalted predecessors such as Wagner or Debussy; they do not merely fill time. Harmonies and harmonic rhythm sound as integral parts of the drama, not merely ‘expressive’ thereof. Glistening instrumental strands prove illustrative, characterful, yet also musically (and musico-dramatically) generative. If I thought occasionally of a line from Henze here, or Tippett there, and so on, that was no more than a matter of coincidence, of me finding my aural feet, as it were; the use to which phrases were put in the larger scheme of things seemed entirely Wigglesworth’s, indeed the work’s, own. 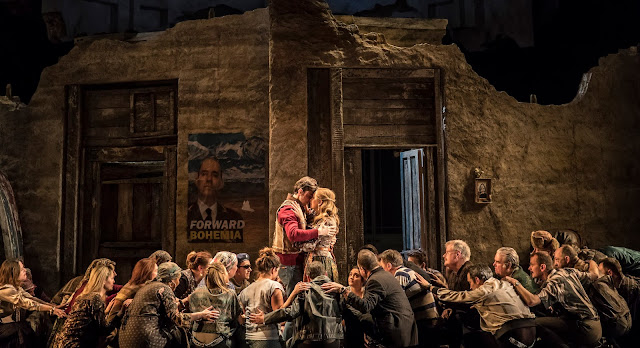 Moreover, the contrast between the closed, seemingly inward-gazing intensity of the musical language of the first act and the pastoral joy, soon occluded by the intrusion of Polinexes (I thought, however inappropriately, of a post-Janáčekian sound world threatened, even conquered, by grinding, post-Bergian musical processes), was apparent for all to hear. So too was the different world again, a world yet seemingly born of dialectical synthesis and/or progression, of the third act. Ghosts from the past seemed to appear musically, transfigured, with a magic whose benign quality needed to be proved rather than merely asserted.  Crucial to that outcome, far from unambiguous, were excellent performances from Anthony Gregory’s youthful, hopeful Florizel, Samantha Price’s heartfelt Perdita, and a commanding assumption of the role of Paulina by Susan Bickley: again, a focus for unity that needed to be won, not merely assumed. With excellent performances from the rest of the cast, the orchestra, and, anything but least, the outstanding ENO Chorus – its threatening presence during the Queen’s trial redolent, perhaps, of a Mussorgskian operatic tradition, although never hidebound by it – The Winter’s Tale received a baptism of which all should be proud indeed.