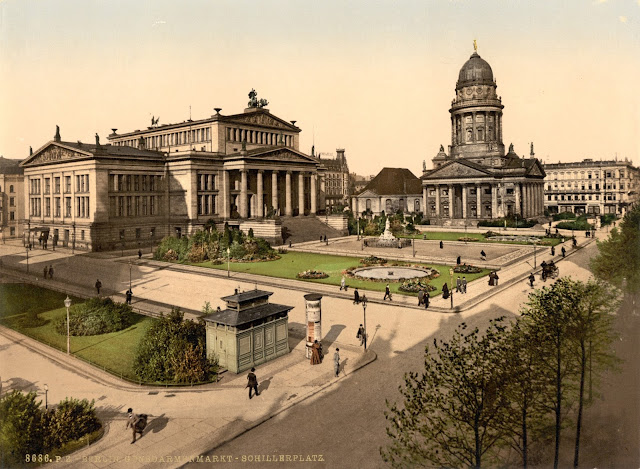 It is always a joy to return to Karl Friedrich Schninkel’s Konzerthaus in the Gendarmenmarkt, originally the Prussian Royal Theatre, but latterly, once its post-war restoration was finally completed in 1983, transformed into a concert house. The Staatskapelle Berlin tends, diplomatically, to give its subscription concerts twice: once in West Berlin’s Philharmonie, once in the East’s neo-Classical jewel. Its acoustic is glorious, despite or perhaps even on account of, its interior transformation; there is life in the old-fashioned shoebox auditorium yet, as the Musikverein or Concertgebouw would attest. For a refugee Londoner, to have just one concert hall of such quality is an extraordinary blessing. To have this, the Philharmonie, the new Pierre Boulez Saal…

Composed only a couple of decades before the construction of the theatre, Haydn’s Creation or Schöpfung seemed very much ‘at home’ here. Indeed, I could not help but consider the strong connections of its librettist, Gottfried van Swieten, to Berlin a little earlier. Joseph II – by then Holy Roman Emperor and co-Regent with Maria Theresa – had intended him to send him as Imperial Ambassador to Rome, but Swieten’s enthusiasm, noted by the Papal Nuncio to Vienna, for ‘moderno filosofismo’ put an end to that. Instead, Swieten was sent to Frederick the Great’s Berlin, where he encountered Handel’s oratorios and other alte Musik, then perhaps surprisingly well cultivated in Berlin circles (certainly when compared with Vienna). Some of the seeds for his collaboration with Haydn were sown here. (In the present climate, moreover, it was impossible not to think that there could hardly be a more European work by a more European composer and librettist. UKIP and the fanatics running the United Kingdom into the ground would doubtless object to a bilingual text: why cannot everyone speak English? Mostly everyone here can, generally very well indeed; how is your German, Mrs May?)

Under Zubin Mehta, the assembled forces gave a broad, central performance of Haydn’s imperishable oratorio, The Creation, neither noticeably ‘period’-influenced – one would hardly expect it to have been – nor especially assertive in its ‘traditionalism’. All such terms are at best problematical to the point of meaninglessness, I know; yet, by the same token, the reader will most likely have a good sense of what is intended. Save for the sparing use of the harpsichord during orchestral passages, then – something about which I cannot bring myself to become too excited either way – I cannot imagine that there would have been anything to scare the horses either way, which is not to say that this was dull, or boring. An equally problematical idea is that of permitting the work to speak for it itself, but that again is pretty much the impression one received. There was plenty of air in the orchestral performance, for instance, during the opening section of Uriel’s first aria, but, by the same token, scope for something darker, when, during that same aria, Hell’s Spirits briefly put in their not-entirely-frightening appearance.

Likewise, the real depth to the sound of the Staatskapelle Berlin – always a great strength of this orchestra – in Raphael’s ‘Rollend in schäumenden Wellen’ was not at all at the expense of variegation in sound. Much the same, far from incidentally, might be said about René Pape’s account of the solo line, about which more a little later. Orchestral solos and ensemble writing were, without exception, beautifully, even heart-rendingly, presented: take the clarinet in ‘Nun beut die Flur das frische Grün’, or the ravishing three flutes against pizzicato in Uriel’s Third Part opening number, ‘Aus Rosenwolken bricht’. Eden indeed, then, and the horns proved just as beautiful, as noble of utterance. Even the timpani underlay, subtle yet directed, had me think: ‘Have I actually heard it quite like that before?’ Whether I had or no was hardly the point, for I was made, or gently guided, to listen. Pictorial elements sounded as musical as well as illustrative as I can recall. Maybe even Berlioz would have recanted from his view that this was a work that made him want to murder somebody. A particular highlight of the orchestral playing for me was the sound of violas and cellos in Raphael’s accompagnato, ‘Und Gott schuf große Walfische’: the archaism conjuring up a reimagined viol consort, the modernity equally striking.

Tempi were generally much as one, or I, might have expected, sometimes a little slower – for instance, in a dignified reading of ‘Mit Staunen sieht das Wunderwerk’ – and sometimes a little faster – for instance, in a very swift reading of the final chorus – but never unreasonably so, and never with the impression that something was being done to the work. There was a Handelian sturdiness to choruses such as ‘Die Himmel erzählen die Ehre Gottes’, which enabled quietly spoken majesty to emerge. Perhaps there might on occasion have been a little more sense of theatre, but subtlety and a lack of grandstanding reap their own rewards. Certainly the choral singing was beyond reproach throughout. The clarity of, for example, ‘Stimmt an die Saiten’ such that Haydn’s imitative writing registered as strongly as I can recall, without prejudice to a necessary, or at least desirable, impression of heft too.

If Julia Kleiter might have seemed, on paper, somewhat lighter of voice than the rest of the assembled company, such a contrast did not manifest itself in reality. Indeed, if anything, it was the relative lightness of Pape’s voice that surprised: not exactly toned down, but with a keen sense of style, and splendid attention to the words. Their duetting as Adam and Eve proved a joy, rightly breathing the air of the opera house as much as the concert hall, the Konzerthaus’s staged past perhaps coming a little more to the fore of its historical palimpsest. Pape proved suavely seductive – the rolling of his ‘r’ in ‘Der Früchte Saft alone… – and Kleiter sweetly knowing in response (‘Der Blumen Duft’). Her phrasing and overall shaping of lines throughout was both stylistically irreproachable and happily dynamic in dramatic expression. Christian Elsner showed that a Heldentenor – he is, I read, a noted Parsifal, although I think I am yet to hear him in the theatre – need not shy away from Haydn, far from it. Indeed, there was something almost of Siegfried Jerusalem (think of his Seasons with Marriner, or indeed his Magic Flute with Haitink) to the fine balance struck between style, heft, and winning sweetness of tone. If I did not emerge from the performance with any of my ideas concerning the work notably upset or transformed, there is a good deal to be said, especially in such troubled times, for something that reminds us of the civilization, the Europe, the Haydn for which we should all be fighting.