Where it all began: well, not quite, but almost. It was in the newly opened Schauspielhaus no more than five minutes’ walk away on the Gendarmenmarkt that Der Freischütz received its 1821 premiere. Now Schinkel’s theatre serves as the Konzerthaus. Opera, however, continues to be the business of the older Linden house, which, following a somewhat bumpy reopening a year ago, seems now properly to have found its stride once again. Recent highlights for me have included Dmitri Tcherniakov’s Tristan and a revival of Claus Guth’s Frau ohne Schatten, of which I saw the dress rehearsal earlier in September, under the excellent – I should probably say ‘outstanding’ – revival direction of Caroline Staunton. This revival of Michael Thalheimer’s Freischütz stood also in her more than capable hands. Since this was my first viewing of this production, I cannot comment on any changes that might – or might not – have taken place. It stood very well indeed, however, on its own terms: a highly accomplished company performance. 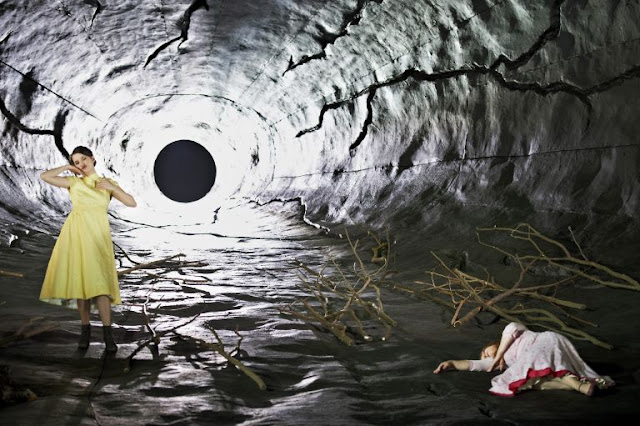 In contrast, say, to Christian von Götz’s production for Leipzig, whose premiere I saw last year, this staging does not seem especially interested in the status of Weber’s opera as icon of German Romanticism. There is, whether we like it or no, darkness aplenty in such a concept for audiences today, just as there would be for this work’s lovechild, Siegfried, yet such is not the only possibility of darkness. This is more psychoanalytical – and again one can hardly help but think of the implications for that and many other of Wagner’s dramas. For, as Wagner, miserable, lonely, and close to starvation in Paris, wrote on seeing Der Freischütz there, the work ‘seems to be the poem of those Bohemian woods themselves, whose dark and solemn aspect permits us at once to grasp how the isolated man would believe himself, if not prey to a dæmonic power of Nature, then at least in eternal submission thereto.’ 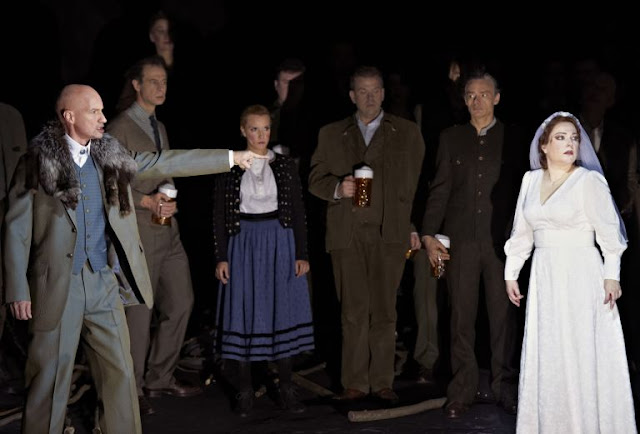 Here the action and those ‘woods themselves’ are seen and framed through the barrel of a gun. Sometimes, perhaps, a gun might just be a gun; it is certainly not here, no more than a forest is just a forest. Man, even men, are isolated; so too are woman and women. We look, as if the wrong way through a telescope to some source of light, perhaps even of life; or is it a nightmare? Nightmares certainly emerge from it; do they not always? Is this concerned with fear of or oppression of women? The either/or is irrelevant; we see, as the tale of a more or less bartered bride progresses, how it is both. We also see how her virginal white, hypocritically valued yet brutally blooded, is both ‘the story’ and anything but. Who dreams up Samiel, who plays a far more important role than usual, here? Wagner saw the work with Berlioz’s recitatives. Here the usual dialogue is rejected or modified in a different way, Thalheimer providing his own – convincing, I think, on its terms – to further and indeed to provoke the enhanced role of this ‘daemonic power’ (in Wagner’s words). Absurd – in a context of realism – stage directions, which seem quite to have confounded that first Berlin production, could therefore be reimagined, the forest and its spirit giving birth to a bestial array of animals without having a Wild Hunt embarrassingly traipse across stage. 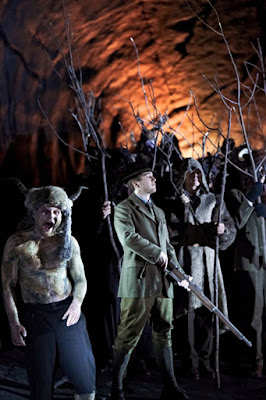 Thomas Guggeis impressed me greatly this spring, standing in at the very last minute to make his house debut in Salome – and rightly receiving plaudits for having done so. On this occasion, it seems, he had a little longer if not so very long to prepare to replace another indisposed conductor. This was perhaps the sterner test, since he was more of a known quality and less of a hero of the moment. Whatever the truth of that, he once again emerged with great credit. For one so young – for one of any age – he seems instinctively, however much craft such ‘instinct’ might hide, to know how to ‘play’ this great orchestra, the Staatskapelle Berlin. It obliged with its statutory dark, ‘old German’ sound, apparently untouched by the ravages of Western orchestral homogenisation. It might have been the orchestra that played for Furtwängler – or, indeed, that does for Barenboim. There was no stiffness to Guggeis’s direction: quite the contrary. Difficult balances were always well struck: between the Romantically ‘organic’ and the needs of the number opera, of the moment too, between Mozartian inheritance  and Wagnerian future – clarinet solos standing out as much as horn calls – and between ‘French’ and ‘German’. We should never forget, however often German nationalists may have wished to do so, that the Huntsmen’s Chorus is based upon an eighteenth-century French street song, ‘Malbrouk [Marlborough] s’en va t’en guerre’. 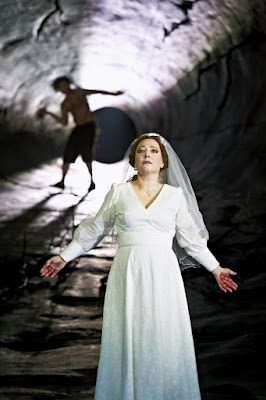 Moreover, the grandeur and ambition of work, production, and orchestral performance notwithstanding, not to forget the work of the excellent chorus, there was something winningly intimate, in the opéra comique tradition to what we saw and heard from the singers on stage. That is not to suggest a lack of vocal scale, but simply to point to their convincing performances as characters on stage. If Roman Trekel and Wolfgang Schöne both proved somewhat dry and stiff, the rest of the cast more than compensated. Peter Sonn’s Max was fresh toned, enthusiastic, vulnerable, Falk Struckmann’s Kasper very much his dark, virile antagonist (even, in this context, alter ego?) Anna Samuil gave perhaps the strongest performance I have heard from her as Agathe, exhibiting a fine sense, scenic and vocal, of tragic catastrophe before the last. Anna Prohaska’s more colourful, spirited Ännchen, despatched words and coloratura not only with ease but with intent and meaning. Performed in this new ‘version’ without an interval, the work emerged, Goldilocks-like, just right: neither too short nor too long. That, however, should remain a dark fairy-tale for another day.