There is no more emphatic modernist masterpiece than Schoenberg’s Moses und Aron. It stays so true to its mission that it cannot, irrespective of ‘the composer’s intention’, be completed, the very quintessence of the modernist fragment, of the ‘difficult’ work about ‘difficulty’. Its concern with the hubris of the representation leads it to a series of antinomies unflinchingly confronted, quite without evasion. Yes and no, perhaps more yes than no – and yet, perhaps even in work as well as in performance, with an undeniable element of the two. The balance may be skewed, just as it is between Moses and Aron, between truth and communication, but it is never one or the other; such would not be bad dialectics, but rather no dialectics whatsoever, and what could be less Schoenbergian than that? One can rejoice in the antinomies in the impossibilities; one can take them further. Alternatively, one can try to make something complete out of them. One will probably do both. Here, however, in an extraordinary new production from Calixto Bieito and the Semperoper Dresden, we perhaps come closer than ever to the next dialectical stage by both honouring the two-act fragment – performed, without an interval, almost as if a single, unbroken span – and, as Bieito insists both in speech and, more important, in the art and craft of stagework, by rendering it an apparently ‘complete’ artwork.

Bieito has at heart – he is assuredly a director with a great heart – always been one not only to present but also to necessitate a message of humanism. Just like Schoenberg, one might say, and these are unquestionably a composer and work for whom he has the greatest, most productive respect. He plays Moses pretty straight, but then he has never been much of one for deconstruction. (For that route, take Peter Konwitschny’s staging, which I saw in Hamburg in 2004.) The first act, then, plays itself out much as it tends generally to do, but with such attention to the detail and meaning thereof concerning the interaction between Moses, Aron, and the chorus, the Children of Israel, that even those of us who imagine we know the work reasonably well discover much that is new, not only visually, but verbally, musically too. Likewise, perhaps still more so, with the relationships between individual, group within the chorus, and the chorus as a whole (when indeed it exists as such). Here, as throughout, we see a deeply musical staging – just as, I think, we hear a deeply dramatic and indeed scenic performance. With Bieito, one never doubts that one is seeing what one should be seeing, the craft of his blocking as impressive as the enabling generosity of his vision. These people, all of them, are human beings, not symbols, whatever the complexity of their dramatic roles. Aron’s visible crises of confidence – the man behind the communicative mask – intrigue and perhaps help explain part of his later desperation to please. That and, of course, the fact that his life and the lives of others might be in danger otherwise. He is a politician, to be sure, but we are led to understand the psychology, not just the deeds, of this politician. 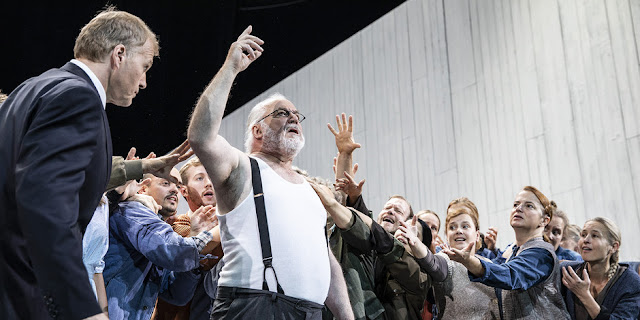 Which brings us properly to the second act proper. What is idolatry to us, today? That is a question any conceivable production of this work will have to ask. ‘BE GOD’ announce the video images – images, be it noted – running at the back and sides of the stage, the arena or agon for the unfolding wilderness drama. (We certainly behold, metaphysically as much as physically, a wilderness, Die Israeliten in der Wüste, as CPE Bach’s oratorio has it. JS Bach and, to a lesser extent, Handel are the most obvious eighteenth-century progenitors here, yet there is always room for more at this party, even when attended by so colossal a chorus as here.) It grows in size and then becomes ‘BE GOD YOURSELF’. Again, all the while, different, flawed human beings play their roles individually and en masse. Not unlike notes, although music is never lazily to be considered a ‘language’, the letters become objects of aesthetic contemplation – Kant? – and soon, tellingly, suggest chains rather than deliverance. What is freedom without determinism? What is an orgy without sado-masochism? The participants excitedly don 3-D-style glasses. Will they see, understand better? Who knows? They think they will; they feel that they do. 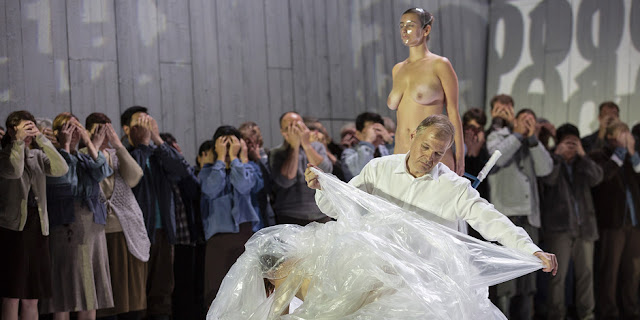 This is a Blutopfer, of course: a blood sacrifice. Words having become images, images become other images. As human bestiality – we do not need camels to traipse onstage, for the beast is within us all – manifests itself in blood and violence, video turns to hardcore pornography. We see no full bodies, although occasionally we see faces to lure us in: faces that may or may not be attached to the hairless, barely human sexual organs and emotionless, purely mechanical acts performed, ‘performance’ being both the operative word and not. (For where, ultimately, is the form allegedly derived, created?) These are bodies or parts of bodies, not people. This is matter, not spirit. This is certainly not ‘love’; ‘sex’ seems too neutral a word. You can – you do – fill in the verbal, conceptual gaps. And then you ask yourself questions about those antinomies you have just delineated. Are they as much to make you feel better, as much a reassertion of your moral and cultural superiority, as anything approximating to truth content? Schoenberg, whisper it, can be wrong or at least limited in his vision too. Aron, part mastermind, part victim, emerges more than ever as a Pilate-like figure. He has helped provide, perhaps even create – is that not God’s task? – the materials. But are not his images, conjured up from a plastic bag of tricks, a diversion both from the truth, whatever that might be, as well as from what is actually going on before his eyes and ears? He has modelled an idol, but the Children of Israel have made themselves, not that idol, let alone Moses’ unrepresentable, unimaginable, ever-apophatic Idea of ‘One’, their own god(s). The manipulated collective - manipulated by what, by whom? - has fashioned a cybernetic idol. Moses, interestingly, seems less central than is generally the case. His tragic diagnosis of what he thinks has happened, more in sorrow perhaps than in anger, is, as much recent scholarship has acknowledged, quite deliberately wide of the mark itself. So it seems, in a related if not quite identical sense, here. 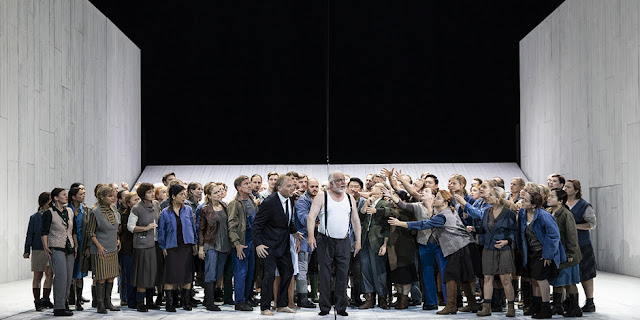 Such would go for nothing were it not for the many outstanding musical and dramatic performances. Alan Gilbert, leading the Staatskapelle Dresden, gave far and away the finest performance I have heard from him; I suppose you either conduct Moses und Aron or you do not. It was a performance as colourful as the op.16 Five Orchestral Pieces, as ‘dramatic’ as Wagner, as comprehending and communicative of the work’s ebb and flow as an excellent account of Beethoven, and as imbued with the spirit of the dance as Der Rosenkavalier. After all, many of us have often thought of Richard Strauss as Aron to Schoenberg’s Moses. This great orchestra could hardly boast of a greater Strauss pedigree: what a list of premieres, from Feuersnot to Daphne! Nor, of course, should one forget that this was the orchestra of none other than Kapellmeister Wagner. It certainly sounded like it here, but with a kaleidoscopic array of timbre that looked forward far into the twentieth century. As for the assembled choruses, again one might say that one either sings Moses or one does not, but that would be to take for granted a well-nigh incredible achievement. These musicians conveyed and lived the drama through words, notes, modes of sung or speech delivery, and of course stage action. Their contributions proved, quite rightly, still more crucial than those of John Tomlinson and Lance Ryan. If the former proved, at times, a little on the generalised side and the latter, ironically, more able with word and stage deed than with tone – twelve-note bel canto this was not – one could readily adapt such shortcomings into the greater narrative and its frame. Anyone feeling disappointed would have missed the point absurdly in the face of something so very much greater than the sum of its parts. Bieito’s – and, I think, Gilbert’s – uncompromisingly operatic view of the ‘complete’ work would win converts from all of those with eyes to see and ears to listen. ‘What third act?’ one might have asked, had the question so much as occurred. 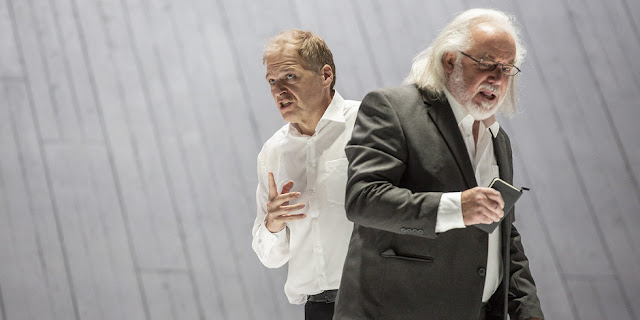 And yet, in the afterlife of its experience, in the way we continue to think about what we have seen and heard long after that final orchestral tragic unison, the work opened up once again. In that, and not only in that, its serialism won out. In 1975, Dresden played host to the first East German performance of Moses und Aron, directed by none other than Harry Kupfer; in Bieito and his assembled forces, Kupfer has found a more than worthy successor. For ultimately – at least for now – the work has emerged more strongly than ever not only as a contest of ideas at its grandest but as an uncontested musical masterpiece. It is fashionable in certain quarters to denigrate the very idea. Schoenberg, thank God or at least Moses, never had truck with fashion, nor will he.