Leap Day concerts do not come around so often: every four years, in fact. With characteristic generosity, then, the Pierre Boulez Saal offered us two. Boulez in the afternoon and Beethoven in the evening: both, of course, great passions of Daniel Barenboim. Here we heard the first of three concerts in which Barenboim, with his old friend Pinchas Zukerman, performs the complete (canonical) violin sonatas. These are works they have lived with for decades, but there was nothing routine to their performance; we heard, rather, a freshness born of internalisation/

Where to begin? Why not at the beginning? There was no sense whatsoever of limbering up. We began in medias res, rather as if this were a return to the hall after an interval, surely a reflection of work as well as performance in the case of the D major Sonata, op.12 no.1. The players’ similar, or rather mutual, conception of phrasing, articulation, and the particular character of early Beethoven shone through. The first movement requires space – and received it. Its brief development section progressed with playful wonder, expanding Haydn’s universe. There was, moreover, a fine sense of return at the dawn of the recapitulation: a second development already, Barenboim showing all the vigour of a thirty-year-old, yet the experience and wisdom that come with greater years. All was founded ultimately – as ever with Barenboim’s Beethoven – on harmony; and that was not restricted to the piano part. Barenboim presented the second movement theme with plain-spoken integrity that truly penetrated to the heart, in every sense, of Beethoven as artist and human being. Lyrical violin response and combination prepared us for a set of variations that would be far more than the sum of its parts. Harmony, once more, and an almost effortless sublimity – the struggling Beethoven is to be found later – showed us, even before the torrential turn to A minor, not only that this mattered, but how and why. The rondo finale benefited from a fine degree of post-Mozartian lilt. That syncopation did its work harmonically as well as melodically and rhythmically, rendering such distinctions justly meaningless. The music smiled and swaggered; again, the distinction did not register. Above all, it had heart. 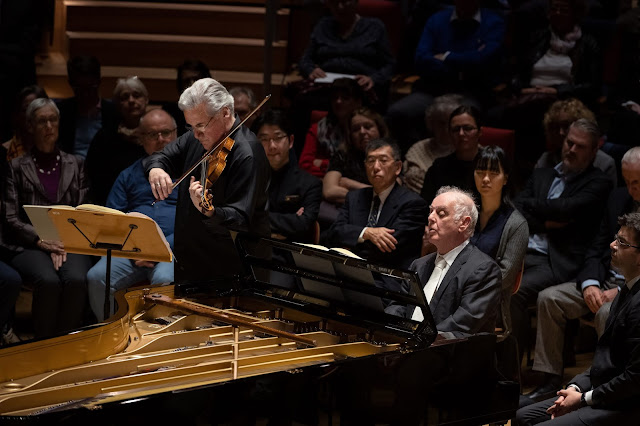 There was a similar immediacy to the opening of op.12 no.2, albeit in a performance instantly attuned to the work’s different character. That certainly included its A major tonality, nodding to Mozart’s KV 526 but also to Beethoven’s own early piano sonata in the same key, op.2 no.2. This first movement offered mischief that was never mere licence, drama that was never mere display. Every note mattered, without pedantry, the surprises wrought by both development and recapitulation especially captivating. The slow movement unfolded with the dignity and depth of a great seria aria. Here was a pathos Mozart would surely have appreciated. The finale’s kindred yet different syncopation (to and from its counterpart in the first sonata) benefited from similar rhythmic buoyancy, yet also hints of something darker. Beethoven never stands still, nor should his interpreters – which includes us as listeners. Barenboim delivered his final, scene-stealing piano A with perfect timing and attack.

As often seems to happen when Beethoven groups his works in threes, whether intrinsically or through our listening expectations, there was a sense of neoclassical looking back to the third of the op.12 sonatas, perhaps especially in its first movement. Not that there was any doubting the composer’s voice here, in a performance boisterous, rigorous, and lovable. Another aria for the second movement? Perhaps, but this was also rightly taken as an opportunity to show that instruments and instrumentalists can and will do things that the voice and singers cannot and will not. It proved, moreover, developmental to a degree belying Beethoven’s still relatively tender years. Barenboim’s piano bass line explained all, with modulations to make hairs stand on end, in a performance as poised as it was moving. An irrepressible finale became, quite rightly, more complex the more one listened, the truest of joy to be had from counterpoint, harmony, and their combination. 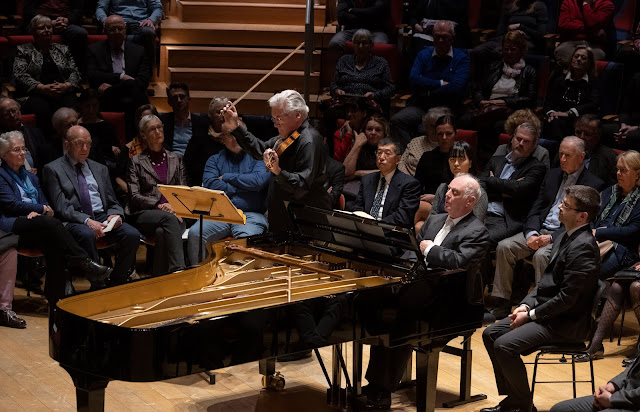 The op.23 sonata offered something undefinably – at least beyond my powers of definition – of A minor to its performance. It was not only its Mozartian inheritance, though that was surely part of it. Whatever the ultimate source and nature, there was above all a rightness to this performance, heard and communicated as if in a single, endlessly divisible breath, grabbing one from the outset. It was a tale of possession, intense in its fury and in its tenderness. The second movement offered strangely restless contrast. Barenboim and Zukerman made no effort to tone down its protean quality, nor did they exaggerate. What we heard was very much that performing ideal, however much a construct, of letting the music ‘speak for itself’, of Beethoven rather than his interpreters rendering Beethoven once again strange. The finale was doubtless haunted by Mozart, yet in that also retained its distance, haunting never being unmediated, thereby enabling something quite different and surprising to unfold. Elements of unforced surprise, whether one ‘knew’ they were coming or not, helped summon this movement’s particular musical, especially formal, qualities into being. The world of the Kreuzer Sonata felt closer than one might have expected. To be continued, then…