Andrea Lorenzo Scartazzini’s new music theatre piece – ‘Musiktheater in zehn Szenen,’ although I am unsure in what sense it is not an opera as conventionally understood – seems to have generated quite some controversy. I have avoided reading the offending article or indeed anything else until seeing this, but I hear that one journalist has been accused of homophobia in the insults she has hurled at the work. Let us leave that on one side – I can hardly do otherwise, not having read any of the commentary – and attend to Edward II on its own terms, or what I take them to be.


It turns out to be one of those difficult things to write about: perfectly serviceable as an opera, competently constructed, doing pretty much everything one would expect it to and almost nothing one would not expect. The work’s ten scenes do not overstay their welcome; the pacing seems just about right. There is a very traditional operatic and more broadly dramatic contrast between the public and private: think of Schiller, or the Petrarchan AMOR/ROMA dilemma, although here, not unreasonably, one never has any doubt that King Edward will choose love and ‘sodomite’ – a word endlessly repeated – lifestyle over matters of state. A vicious crowd, stirred up by hypocritical clergyman, bays for sodomite blood. The Queen moves – perhaps a little quickly, but such is opera – from sympathetic, lonely figure to vicious, vengeful, murderess. There is, moreover, a genuine sense of ‘this could be any family’, the young Prince Edward torn between his two self-obsessed parents. Scartazzini’s score follows the action, in what sounds on a first hearing (with all the caveats that must imply) like a generic not-quite-contemporary modernism. It screams when one would expect it to, likewise creates a hushed atmosphere when one would expect; it has structural impetus of its own within scenes. 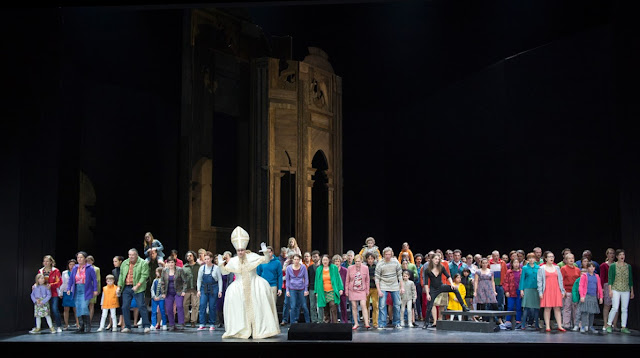 And yet, there is little that adds up to anything more than that, or at least it did not for me. We can leave aside the playing fast and loose with history and with sources: that is what dramatists do. However, the framing devices of librettist, Thomas Jonigk, come across as forced, and indeed almost haplessly agitprop. Attempts, for instance in comments by the Angel, to present knowingly anachronistic references to other pertinent historical events and figures, are a bit embarrassing, likewise the historical tour’s visitation of Edward’s cell at the close. The comparison between wronged Jews and sodomites is not pursued in any depth, and merely seems glib. It is, moreover, only really at the close – and perhaps this is deliberate, but if so, it again needs better framing – that Edward as a character comes into focus; everyone else, despite extremely strong performances, remains something of a caricature. Derek Jarman, let alone Christopher Marlowe, did this, or something akin to this, so much better. Scartazzini never seems to lead the action, to have the orchestra partake in it, engender it, rather than predictably mirror the events on stage. His vocal lines, such as they are, hold little or no interest of their own; I could not help but wonder whether he would have been better off writing a symphonic poem or equivalent on the subject.

The sad conclusion I ended up drawing was that this opera’s creators seem to have thought it enough to write a gay opera. Perhaps it is; we are not exactly blessed with a huge number of examples, at least overtly, proudly so. (Subtexts, however close to the surface, are another matter.) Overall, though, it feels too much like box-ticking, too little like something that might have arisen from genuine artistic necessity. Imagine what might have been done in an opera that placed queer experience at its complex heart, doing something akin to what Nono did for women’s revolutionary experience in Al gran sole carico d’amore. There will, I hope, be other opportunities – and, to be fair, there is an abundance of mediocre, or worse, operas dealing with heterosexual themes.

That said, the Deutsche Oper deserves only praise for the commitment it has shown, both in staging the new work and, still more, doing so in performances of such quality. Its orchestra and chorus, the latterly brilliantly trained by Raymond Hughes, played under Thomas Søndergård with a confidence that suggested this might have been a repertory work. Balance, weight, incisiveness, tenderness: all those qualities and more were present in the pit; on stage, one could hardly have asked for more from the chorus, director Christof Loy’s blocking of the partly differentiated mass a joy in itself to behold. Indeed, Loy’s work in general – I speak as someone who has been far from a constant fan of his productions – deserves great credit, essentially presenting the opera as a somewhat abstracted version of classic grand opera, with slightly alienated invasions from without. The ‘family values’ crowd was an obvious ploy, replete with placards from any reactionary demonstration one might care to look at, but it made its (agitprop) point well enough.

Michael Nagy drew one in more than one had any right to expect in a visually torn, vocally secure performance of the title role. As the Angel only the King could see, Jarrett Ott offered all the strength and comfort Edward might ever have asked: a rock in a vicious world indeed. Ladislav Elgr, seen for about ninety per cent of his time on stage merely in well-fitted white vest and briefs, exhibited as the favourite, Gaveston, a near-ideal marriage of fun, born of social desperation no doubt, and magnetism. Agneta Eichenholz made the most of that abrupt transition from wronged woman to monster in a powerful assumption of the role of Isabella. The darkness of her relationship to Andrew Harris’s unreconstructedly masculine Mortimer could only really be hinted at, given the confines of the work, but hinted at it certainly was. There was a good deal of camp humour to be had from the recurring double act – from thirteenth-century soldiers guardedly admitting their sodomite tendencies to modern tour-guides – of Philip Jekal and Gideon Poppe. The Mime-like nastiness, with an undoubtedly chilling Nazi allusion of just following orders, of Edward’s murderer-with-abortionist’s-bag, Lightborn, was splendidly portrayed by James Kryshak. Ben Kleiner’s treble could hardly be faulted as the young prince; he knew how to deport himself on stage too. And last but not least, Gieorgij Puchalski’s performance in the non-speaking role as Spencer Junior, the new favourite risen from the ashes of the old, showed just what the suggestiveness and sheer physicality of a dancer in a vocal work can achieve. 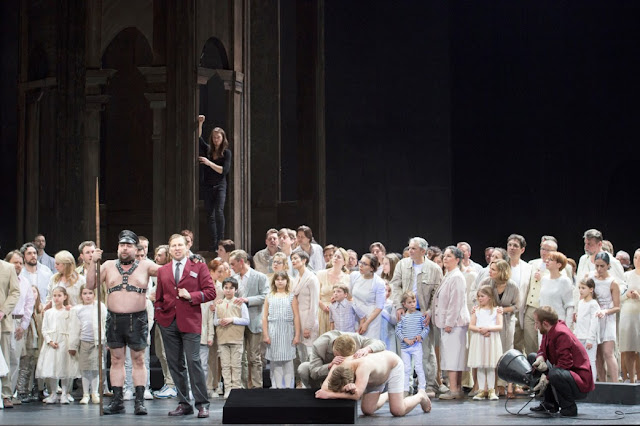 If the above tends too much towards a list, that is part of my point. These were all, without exception, fine performances indeed; they did all they could with a work that could have been much worse, but ought to have been much better.