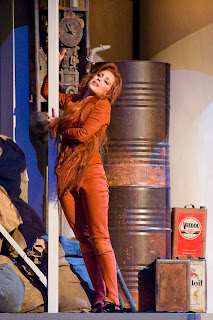 I enjoyed this production very much first time around at the Bastille, in 2008, an earlier version of the production having been mounted at the Opéra de Lyon in 2000. It was not the least of Gérard Mortier’s virtues to have mounted the Paris Opéra’s first ever Cunning Little Vixen – or, as it is known in France, La Petite Renarde rusée. The particular virtues of André Engel’s production would have made it well worth seeing, even if it had not been such an historical occasion. (Janáček’s greatness has not been self-evident to everyone, or almost everyone, until surprisingly recently.) And so, it was pleasing to be reminded of the fine balances Engel and his production team – not least designer, Nicky Rieti – uphold between Nature and man, whether in portrayal of the animal characters themselves or the relationship between those characters and the human world, and also between animate and inanimate. The railway line remains an apt summation of the fraught quality of that latter relationship, and also provides a specific yet not-too-specific sense of location, which can be slightly varied as required. Passing of the seasons remains simply yet tellingly observed. Cycles of various sorts are crucial to the success of this opera, as Bill Bryden’s recently revived production for Covent Garden testified. And yet, there felt something a little tired, end-of-season-ish to the proceedings. I do not wish to exaggerate, but the sharpness of direction was not always quite as it had been – and I do not think this is just because I was seeing the production for a second time. There was something of the feeling of a repertoire production: not the end of the world, but a pity nevertheless. 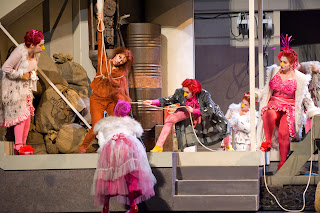 Adriana Kucerova (Vixen), Elisa Cenni (Rooster), and Natacha Finette Constantin (Crested Hen)
Images: Opéra national de Paris/ Christian Leiber
This was often the case with the musical performances too. Again, nothing was bad, but taken as a whole, this was not a performance on the same standard as that I saw in 2008, happily preserved on DVD. (I have not seen it on that medium, but should imagine it would transfer very well.) Adriana Kucerova, replacing Elena Tsallagova, proved for the most part a winning Vixen, and Hannah Esther Minutillo reprised her Fox with style and commitment. Yet the chemistry was not quite so apparent between them, and their duetting could at times tend towards the shrill (partly a matter of orchestral support too). Standing out, as so often, was the Forester, in this case portrayed by Jean-Philippe Lafont. Bluffer than one often encounters, one could yet find credibility in this character, and follow his own transformation through communion with Nature. Choral singing, not least that of the children’s choirs, was generally of a high standard. Singing in Czech caused them no problem at all, so far as one could discern.

The orchestra generally sounded marvellous on its own terms, strings gleaming, woodwind and brass equally impressive. Yet Michael Schønwandt’s conducting tended too much towards a generalised late-Romantic sound, missing the piquancy and bite of Janáček’s harmony and orchestration. At times, as if to compensate, he drove the score along too brusquely, before reverting to undue, slightly distorting emphasis upon kinship with Wagner and Strauss. Bringing out such a relationship is an interesting, perfectly valid strategy, but too often it proved to be at the expense of the composer’s individuality. For instance, the third act horns sounded straight out of Siegfried – or Der Freischütz. I should be the last to complain in principle, but this composer needs ultimately to speak in his own vernacular idiom, the Böhmischer Wald standing both close to and distant from Janáček’s Moravian countryside. Schønwandt also displayed a habit of pausing too long between sections: continuity is rightly prized here, heightening rather than lessening the characterful musical shifts, rhythmic and harmonic, within scenes. He sounded as though he would have been happier conducting Lohengrin.
Posted by Mark Berry at 6:20 pm