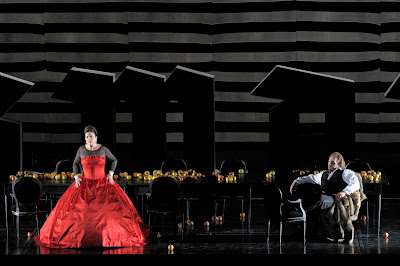 
I surprised myself by concluding that the first instalment of the Paris Ring had been ‘all told, … the best Rheingold I have attended since Haitink’s tenure at the Royal Opera’. Die Walküre is arguably a tougher proposition still than the cycle’s Vorabend, but that earlier promise was essentially maintained. Günter Krämer’s production remained sure-footed and often imaginative; the contribution from Wagner’s Greek chorus, the Orchestra of the Opéra national de Paris, was truly excellent; Philippe Jordan’s conducting grew in stature as the evening progressed; and, if the singing was rarely at a level to challenge the great interpretations we have all heard – or fancy we have – then it was at least creditable, Katarina Dalayman’s Brünnhilde proving much more than that.

The synthetic nature of Krämer’s Rheingold continues into his Walküre. Ideas might well be traced back to other productions, but that is not to say that either the particular mode of expression or the particular synthesis too closely resembles any other. No Wagner scholar would claim that he did not rely upon, that he was not inspired by, the work of his predecessors. Nor, I am sure, would any Wagner performer be so arrogant, though I have a nasty suspicion that Sir Roger Norrington, he of the Tristan-Prelude waltz, might draw close. Why should we expect stage direction to be entirely different? And should it be so, is that not more likely to be the product of default than design? What we have here are ideas that generally have a firm basis in the work, not in a quasi-archaeological obsession with Wagner’s intentions, narrowly construed, but nevertheless in meaningful dialogue with what he wrote. There is plenty of directorial leeway in deciding what to emphasise, what to develop, without necessity to transplant something entirely ‘new’ onto Wagner’s drama.

The first act is a case in point. Krämer elects to convey a greater sense than the composer prescribes of Hunding’s society. This highly militarised milieu reminds us that the brutal Hunding represents a remarkably contemporary – for Wagner and for us – bourgeois hierarchy of instrumentalisation. Hunding appears to be a middle-ranking figure in whatever civil war is raging; Siegmund hails of course from an insurrectionary wild race, fro whom nothing (at least nothing that Fricka, voice of custom would understand) is sacred. Thugs billeted upon Sieglinde, Hunding’s mere chattel, are Krämer’s invention; the violence they exude conveys Wagner’s dramatic purpose. Another social aspect emphasised, again in contradistinction to Volsung anarchistic outlawry, is that of the Valkyries. A choice is thereby set up for Brünnhilde to make. Wotan’s maidens serve a military role, in this case not only returning heroes to Valhalla but cleaning up their bodies and enrobing them. Theirs is probably the most convincingly integrated Ride I have seen: no danger here of something to be tacked on, endured, until we can return to the proper business of Wotan and Brünnhilde. Valkyries and soldiers form part of an uncomprehending society that watches the extraordinary turn of events at the end of the second act, when for Brünnhilde the first intimations of the power of love lead her to disobey Wotan’s command. Loge’s fire, when it comes, will burn brightly indeed. Yet, like the Young Hegelian Bruno Bauer’s ‘I demonstrate that religion is a hell composed of hatred for humanity and that God is the bailiff of this hell,’ the intention will be to unmask, leaving us with a view of the society left behind. Bauer, who at one point harboured plans with Karl Marx to found a Hegelian journal entitled The Archives of Atheism, knew Mikhail Bakunin well – and we know with whom Bakunin would fight upon the barricades of Dresden.

The sickness of the (painted) tree in the first act stands consonant with that of the ‘bad’ nineteenth century: a sort of sub-Pre-Raphaelite post-Romanticism. First we do not see it, then Sieglinde reveals it. Then we – or at least I – think: is that not just too poor a substitute for Wagner’s ash? But there is something more to come, revelation from behind the painting of the sword that mysterious visitor had deposited. The real forest, when viewed properly during the second act, evokes Caspar David Friedrich, but at a slight remove, as if that artist’s day has already passed, which in a way of course it has, whilst retaining a presence. Reality, and especially history become more layered than one might have thought, in a fashion akin to Wagner’s motivic method.

GERMANIA now stands tall, but Krämer and his team cleverly undercut, like Wagner, Valhalla’s grandiosity. They do it with mirrors – which both extend the scope of Jürgen Bäckmann’s set and highlight the trickery involved. Gothic letters, seen in the production picture, may be seen in black on stage and white in reflection: magically, as it were, the ‘right way around’. This, presumably, is what the gods see, or delude themselves they see. Likewise the upholders of self-righteous, hypocritical bourgeois morality: they represent a properly Feuerbachian inversion of religious practice. If Feuerbach’s Essence of Christianity looms large, so does his earlier Thoughts on Death and Immortality. Where Feuerbach had praised antiquity for its lack of belief in and unawareness of the doctrine of immortality of the soul, it is now necessary to strike against that belief, as Siegmund does. Interestingly, Wotan himself takes Siegmund to his final resting place during the third act, honouring perhaps ‘das Ende’, for which the god has wished, and to which the Volsung might have pointed the way. Freia’s golden apples are littered around Valhalla, to remind us of the casual abandon with which the denizens of light have adopted their false immortal cause. Ubiquitous yet already insufficient, they equate very well to the terms of the drama so far. One might even claim that they not only support the words but compensate for a surprising absence from the music. Still, Wagner had so many balls in the air that dropping the odd apple is neither here nor there.

Erda returns at the end, reprising her slow walk across the stage. Brünnhilde elects to sleep beneath rather than upon the table Wotan has prepared for her and Siegmund. It is not yet clear what this might mean, since there is more to come, but the handling of Walküre makes me eager to find out.

Philippe Jordan’s first act opened impressively, not least on account of the tremendous bite from the opera orchestra’s strings. This was a true storm, also a musical one, a mini-exposition if you like. Tension was not always maintained, however, especially during the final scene, some of which meandered. Yet the structure of the second and third acts was far more clearly in place: a sterner task to effect, one might have thought, yet accomplished with great success. No one in the theatre seems likely to match my experience of Bernard Haitink’s direction of the potentially sectional second act, Wotan’s monologue and all, yet shape and momentum were skilfully imparted. Wagner’s endless melody was sung – and meaningfully so.

Robert Dean Smith is unlikely to win prizes for charisma, but he was for the most part a dependable enough Siegmund, even if ‘dependable’ is hardly sufficient in this role. His second cry of ‘Wälse’ seemed, surprisingly, to last for an eternity, far longer than I can otherwise recall. Jon Vickers might have brought it off, but here we ended up with an audibly strained hero for a good part of what ensued. Ricarda Merbeth portrayed a feistier, less pure Sieglinde than is often encountered. Her odd facial expressions took a bit of getting used to, but the confidence of her vocal assumption grew, culminating in a refulgent, genuinely moving ‘O hehrstes Wunder!...’ Günther Groissböck and Yvonne Naef, imperiously resplendent in Falk Bauer’s gown (pictured), made much of the words of Hunding and Fricka, and showed that they could act too. Thomas Johannes Mayer, substituting for the advertised Falk Struckmann, was a more than creditable replacement as Wotan, gaining in stature as the drama progressed. He too showed especial attentiveness towards the words, veritably hissing his contempt at Hunding, but proving equally capable of lyricism when required. Katarina Dalayman’s Brünnhilde was the star turn, however: tireless and yet a soul in transition – arguably in emergence. The demands of words, music, and stage action combined here to present a Valkyrie unlikely to be equalled by present-day exponents.

What a pity, then, that one was fortunate to hear a single bar of the second act without an onslaught of heavy coughing, the outer acts bearable only by comparison. Once again, I was reminded of Pierre Boulez’s strictures concerning opera houses; once again I doubted whether they really are the right place to stage Wagner’s music dramas. Not for nothing has the later composer-conductor voiced admiration for his predecessor’s loathing of a system in which ‘opera houses are … like cafés where … you can hear waiters calling out their orders: ‘One Carmen! And one Walküre! And one Rigoletto!’ A Jockey Club disruption might at least have proffered entertainment as well as enragement value. If the Opéra National de Paris and the Bastille amphitheatre are doing Wagner proud, they remain hamstrung by a pernicious section of their audience. It is not difficult to imagine how Wagner would once again have railed at the city of his misère.
Posted by Mark Berry at 12:12 am