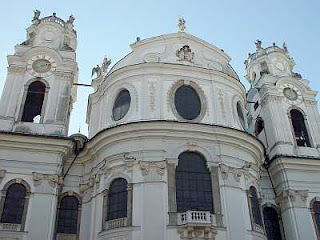 The Salzburg Festival's 2011 programme has now been announced. Click here for the website. The operas were announced a while ago, but highlights would be Die Frau ohne Schatten (Christian Thielemann, who will also conduct a Vienna Philharmonic Strauss programme) and The Makropulos Case (Esa-Pekka Salonen). Claus Guth's Mozart Da Ponte trilogy will be performed for the first time in its entirety (all three parts are reviewed on this site, from August 2007, 2009, and 2010.)

Elsewhere, there is a typical horn of plenty, including Pierre Boulez and the Vienna Philharmonic in Berg and Mahler (Das klagende Lied), Nono's Prometeo (Metzmacher, in Fischer von Erlach's magnificent Kollegienkirche, pictured above: last time I visited, it was undergoing restoration...), Stockhausen from the SWR Freiburg Studio (Cosmic Pulses, etc.), Morton Feldman's Beckett opera, Neither, Salvatore Sciarrino's Macbeth, Pollini in Beethoven, two concerts from Riccardo Muti's visiting Chicago Symphony Orchestra, Barenboim and the West-Eastern Divan Orchestra in Beethoven and Mahler, etc., etc. If only Markus Hinterhäuser had been appointed permanently as artistic director...
Posted by Mark Berry at 1:30 pm