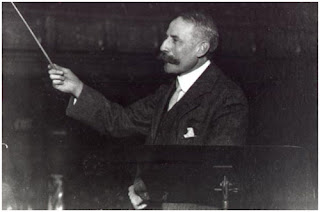 First came a surprise: the latest in the UBS Soundscapes: Pioneers series, Emily Howard’s Solar, commissioned by LSO Discovery. Apparently, Howard’s piece, conducted with typical verve by Nicholas Collon, aimed ‘to create a musical image of our sun, our life-force’, deriving particular inspiration from the sun’s magnetic forces. It began high-pitched, strident, and very LOUD, and went on for a relatively brief amount of time, sounding rather like film music. I surmise the temptation to employ all of the LSO’s forces must be great, when handed such an opportunity. There was a quieter, ‘atmospheric’ section – again in a filmic sort of way – before the ending reverted to very LOUD, culminating in melodramatic bell-tolling. Throughout, the pulse was slow. The piece was a relatively inoffensive curtain-raiser, I suppose, but whatever happened to confronting the complacencies of a bourgeois concert audience? Might it not be possible to shake one’s fist, just a little? Moreover, though the format of the short orchestral piece might be considered constricting by some, just think of Webern…

Mendelssohn would seem ready-made for Sir Colin Davis’s gifts, though I am not sure that composer and conductor have been especially associated over the years. I am pleased to report that this account of the 'Scottish' Symphony was very fine indeed. The first movement’s opening woodwind evinced a gravely post-Mozartian resonance (perhaps no surprise, given the conductor), whilst the strings’ response to this opening Holyrood statement proved pregnantly dramatic. Then the Allegro un poco agitato opened just as Mendelssohn prescribed: beautiful, expectant, yet never unduly forced. Davis shaped the drama naturally and lovingly, though turbulence – in the Flying Dutchman premonitions, for instance – was certainly there, without ever resorting to cheap ‘effects’. Structure was clear and meaningful, line unbroken, Mendelssohn emerging as a true symphonist. What a relief, after Vladimir Jurowski’s recent fussiness with the ‘Reformation’ Symphony.

The scherzo opened light of touch, rhythmically precise, the LSO’s richly upholstered virtuosity – what a welcome change from ‘period’ fads – once again serving purely musical ends. Without a hint of indulgence, the Adagio was sung in warmly Romantic fashion, though its Klemperer-like tread generated considerable dramatic intensity, almost prefiguring the Elgar of the concert’s second half. As the reader may by now have guessed, symphonic drama was very much the key to Davis’s approach. The finale opened with a jolt but a musical jolt. Rhythmic momentum was crucial to the generation of almost Beethovenian purpose, though Bach of course was equally present in Mendelssohn’s contrapuntal working out. Romantic freshness could be heard without diminution to the performance’s grand scale: an object lesson to those who think one or the other must be chosen. The descent into Holyrood gloom proved duly evocative, mists and all. If even Sir Colin and the LSO at full throttle could not quite convince me in the final peroration – Mendelssohn’s sense of form seems oddly distended in this movement as a whole – theirs was a valiant attempt.

Nikolaj Znaider has devoted a good part of this centenary year to Elgar’s Violin Concerto, recording it with Sir Colin and the Staatskapelle Dresden, but also performing it in sixteen concert halls across the world. One hundred years to the day, Znaider returned the work to London, playing on Fritz Kreisler’s violin: that is, the very instrument upon which Kreisler gave the first performance. That is all very well and good, of course, but the proof of the performance is in the hearing. I am delighted to report that Znaider, Davis, and the LSO – an Elgar orchestra of pedigree and distinction – did Sir Edward proud. The orchestral opening was unusually purposeful: no lingering, though tempi proved eminently flexible where necessary. Znaider’s entry sounded darkly beautiful, almost viola-like in tone, vibrato and portamento employed at the service of Elgar’s solo line. It was – and this goes for the performance as a whole – Romantically impassioned rather than Anglo-reticent or ‘Edwardian’. Cobwebs were swept away with a conviction that led one to believe they had never been there in the first place. That should not be taken to imply a lack of tenderness, readily, movingly apparent in the second subject, yet Znaider and Davis ensured that this Elgar would not go gentle into whatever form of night it was that approached. The composer, quite rightly, emerged as the modern master hailed by Strauss.

Elgar’s Brahmsian inheritance came to the fore in the slow movement, though there could be no mistaking the nobility and magic as orchestra and soloist wove an utterly distinctive textural and motivic web. Znaider navigated what can be tricky corners with ease – unsurprising, perhaps, given that plethora of performances this year – yet there was not the slightest hint of complacency to conception or execution. This entire Andante was sung like a great aria, and I do not refer to the solo line alone. I was immediately impressed by the kinship announced in the finale between this concerto and its successor for cello – as well as the continuation of the Brahms connection. There was a touching, genuine innocence to the announcement of the second theme, but orchestral doubts chilled: again, no complacency. Even behind the most apparently affirmative music there lay uncertainty: Elgar the modernist? (I refer you to the excellent book written by my colleague, JPE Harper-Scott). Doubt may have been part of the conception, but there could be no doubt concerning the excellence of the performance from all concerned: the cadenza was simply spell-binding, and that goes as much for the gossamer orchestral ‘accompaniment’ as Znaider’s rapt delivery of the solo line. Happy Birthday!
Posted by Mark Berry at 1:19 pm