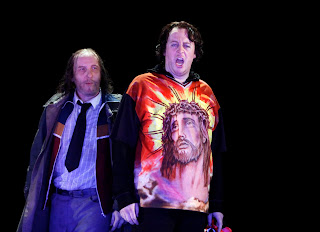 
I was unsure whether things could get much worse for Don Giovanni, following the Deutsche Oper’s new production from Roland Schwab. They could and they did. Rufus Norris’s debut as an opera director lacks even the occasional glimpses of coherence vouchsafed in Berlin. The setting seems to vary, or is it just unclear? We seem in general to be somewhere mid-twentieth-century: perhaps the 1950s, I thought, though it did not really seem to matter. A vulgar flat, apparently done up by a teenage girl – full of hearts and pink balloons – sometimes does service as a setting; sometimes there is a wall; and at one point it appears that the action has shifted to a community centre. Nicky Gillibrand’s costumes are as mixed as Ian McNeil’s sets, and often simply hideous. Leporello appears to be a tramp, though I could not work out how this might fit with anything or anyone else.

There is no sense of danger, nor indeed any sense of who these people might be and why we should show any interest in them. I wondered whether the metallic semi-circle that often hovered in the air might be a reference to a circle of the Inferno. Perhaps it was, but when it came to the Stone Guest Scene, it did not seem to act as such; instead, Don Giovanni touched it and appeared to be electrocuted. (There were occasional 'electrical' sounds throughout, to uncertain purpose.) Moreover, whereas everything previously appeared to be presented – it was almost impossible to be sure – as something bordering on desperately unfunny farce, that all suddenly disappeared during the Stone Guest Scene itself, when some orange-clad monk-like figures arrived on stage. It was a challenge – and a challenge that did not seem worth the effort –to connect what we saw on stage with the libretto, let alone Mozart’s music. I never thought I should find myself saying this, but I actually preferred Francesca Zambello’s vacuous Royal Opera offering. What a pity, then, when ENO had a truly extraordinary production on its books from Calixto Bieito, a production that scintillatingly grappled with the prospect of a life and a society on the edge of the most terrifying abyss. This seemed to cross the worst of Zambello with the sub-farcical reductionism of Barrie Kosky’s dreadful Marriage of Figaro for the Komische Oper, Berlin. To add insult to injury, a blinding blue light, reflected – accidentally, I assume, though surely this ought to have been checked – from a stage mirror made sitting through part of the first-act finale a physical ordeal. Various patrons, when able to distract themselves from heavy-duty coughing, were compelled to hold their programmes over their faces. In the circumstances, perhaps that was not so great an ordeal.

Musically, there was more to enjoy. Kirill Karabits conducted a generally well-mannered performance, rarely exciting but with an attention to musical values sadly lacking in the stage direction. Phrasing was carefully handled; tempi were mostly well chosen and notably lacking in weird variation or other would-be iconoclasm. The ENO Orchestra played beautifully, especially its woodwind, though it could often sound a little under-powered: a large space such as this really needs more strings. In any case, this is a vigorous score, indeed a dæmonic one; beauty is necessary but not sufficient. The Stone Guest Scene, however, and its presentiment at the beginning of the Overture, were taken faster than I have ever heard: an eccentric and unwelcome contrast, even allowing for the fashionable nature of an alla breve reading. 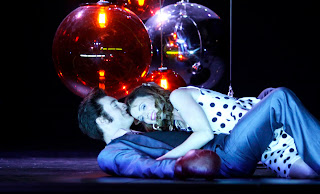 Unfortunately, Iain Paterson proved wholly lacking in charisma in the title role. Granted, the production did him no favours, but even so, there was not the slightest sense of menace or allure in his reading. He seemed utterly miscast. One does not have to be Christopher Maltman, let alone the stupendous Erwin Schrott, though it certainly helps, but one needs to suggest and rather more than suggest what the attraction might be. Likewise, Brindley Sherratt’s Leporello was hamstrung by the production, yet his delivery – not least the all-purpose ‘regional’ pronunciation – was often coarse and his general assumption of the role unconvincing. John Molloy’s Masetto too often sacrificed pitch to rhythm, most glaringly when he first appeared on stage. Some may also have found his 'Irish' – or was it West Country, for it seemed to vary?  – delivery irritating and unnecessary.

The rest of the cast was pretty good, however. Sarah Redgwick was a late substitute for the ailing Rebecca Evans. Save for a little trouble with coloratura in ‘Mi tradì’, one would never have known. She alternated between pride and vulnerability, convinced on stage insofar as the production would permit her, and presented a properly Mozartian vocal line. Katherine Broderick’s Donna Anna evinced all of those virtues and more: an outstanding performance, which made me long to hear her in Italian. The accuracy and warmth of her second-act aria put a recent Salzburg Festival incarnation to shame, even if focus could sometimes wander. Sarah Tynan's Zerlina was finely sung and sexy too. Robert Murray was a sincere Ottavio; the role is thankless, but his delivery did not lack beauty of tone. Matthew Best was a powerful, sonorous Commendatore; again, if only he had been afforded a different setting…

If, however, I were given to violent thoughts when it came to the production, they became positively – negatively? – terroristic when enduring Jeremy Sams’s translation. I do not think I have previously encountered a translation that so wilfully draws attention to itself and away both from libretto and score. At least bad, it is full of jarring colloquialisms and forced, cringe-worthy rhymes, with occasional, bizarre reversions to something more literal. (Perhaps they were intended to be ‘meaningful’, but it was difficult to discern any pattern.) Much, however, was wholesale reinvention. Leporello’s Catalogue Aria lost any indication of geography, let alone the correct numbers. Italy, France, and Spain were all gone, replaced by months of the year. Why? Was it solely to annoy? Some of us happen to consider Lorenzo Da Ponte a more than able librettist; might he not perhaps be accorded a little more respect than that? Somewhere the word ‘spreadsheet’ appeared too, which elicited widespread hilarity amongst a particularly noisy audience. (It was difficult for someone to walk on stage, however nonchalantly, without provoking hysterical guffaws from some.) At another point – I forget when, but am pretty sure it was somewhere during the first act – a ‘jacuzzi’ appeared in the text, the sole apparent reason being to enable another ‘hilarious’ rhyme, with ‘floozy’. Perhaps worst of all, and once again with no discernible justification, the plot was changed, so that instead of having encountered one of Leporello’s sweethearts, he had flirted with his manservant’s sister instead. These are but a few examples. Da Ponte deserved much better.

ENO, please may we have Bieito’s Don Giovanni back? It may be flawed, but it is uncompromising in its vision and provides the opportunity for serious musical drama.
Posted by Mark Berry at 12:38 am